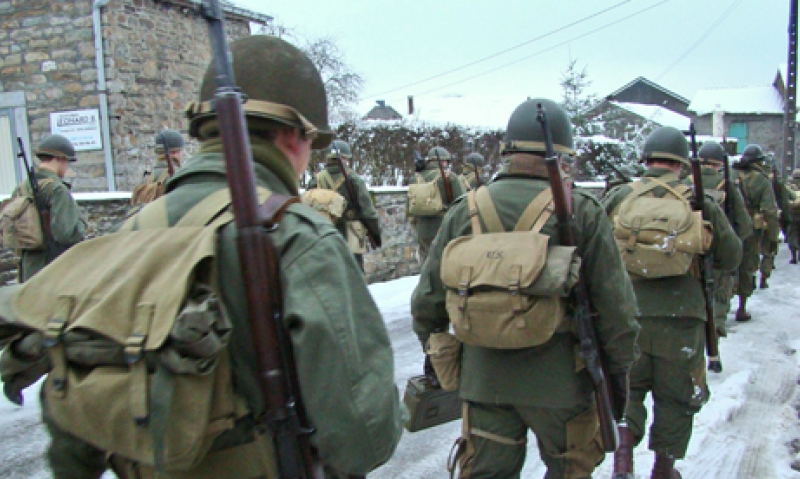 A little more than 65 years have passed since Germany launched a desperate and massive winter counter-attack on Allied forces crossing Belgium en route to Berlin. It was one of the deadliest conflicts of World War II, taking the lives of some 19,000 Allied troops and approximately 20,000 Germans.

Today, veterans of the battle, history buffs, students and visitors are retracing a 23-kilometer route taken by one U.S. regiment that fought there in the winter of 1944 and 1945 - the 504th Parachute Infantry Regiment of the 82nd Airborne Division.

"In the Footsteps of the 82nd Airborne Division" is an annual winter march and jeep tour in Belgium that retraces key routes taken by soldiers who fought in the Battle of the Bulge. This is the event's 28th year.

In the frozen Ardennes Forest, the Germans made an all-out effort to slow the Allied advance and divide it. Depictions of the front line appearing in U.S. newspapers showed a dent or bulge where the Germans had made progress, thus the name "Battle of the Bulge." Allied success there - though costly in lives - greatly weakened enemy forces, and by May, victory in Europe was achieved.

Today's events begin with a wreath-laying ceremony at the December 1944 Museum in La Gleize, Belgium. This year's march includes six historical stops along the way: La Venne, Brume, a road from Rahier toward Monceau, Rahier, Cheneux and La Vaux. The march also includes a wreath-laying in honor of the 504 PIR at Cheneux.