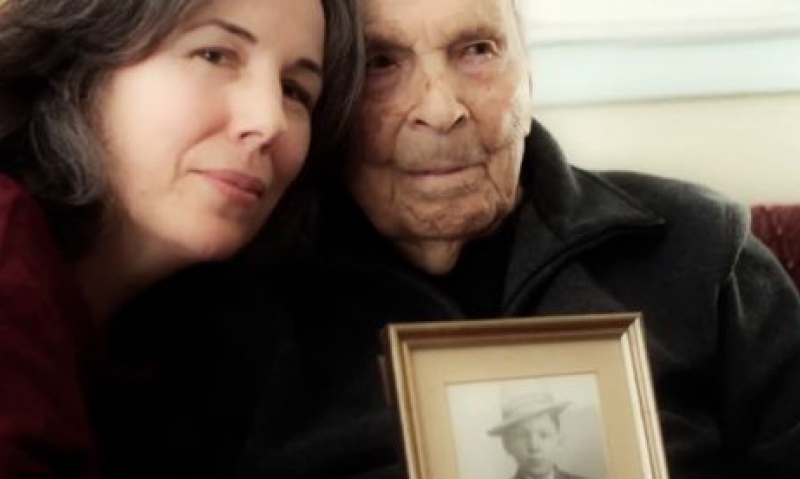 Frank Buckles and his daughter, Susannah. Photo by David DeJonge

Frank Buckles, the last living U.S. World War I veteran out of 4.7 million who served – and the last survivor of that conflict’s brutal Western Front – died Feb. 27 at his small West Virginia farmhouse. He was 110.

He will be buried with full military honors at Arlington National Cemetery in Virginia. The date has not been set.

He survived the Spanish flu pandemic, witnessed black U.S. track-and-field star Jesse Owens win a gold medal at the 1936 Berlin Olympics, and bumped into Adolf Hitler on the stairs of a German hotel during the dictator’s rise to power. He was the last of the generation of soldiers that founded The American Legion, and the oldest person to ever testify before Congress.

"He’s Forrest Gump with class and IQ," says David DeJonge, spokesman for Buckles’ family and president of the World War I Memorial Foundation. "He lived half of American history. He’s the last man of 70 million combatants in the world who witnessed the Western Front (during World War I)."

Buckles was aware of his place in history. "I always knew I’d be one of the last because I was one of the youngest when I joined," Buckles told the New York Daily News after he became the last survivor.

"But I never thought I’d be the last one."

"He’s the last torchbearer from World War I," says DeJonge, who is producing "Pershing’s Last Patriot," a documentary film about Buckles. "He recognizes that The American Legion was birthed out of the veterans of World War I. And to have the nearly 5 million who served go without representation in our nation’s capital (was) very disheartening to him."

Frank Woodruff Buckles was born on Feb. 1, 1901, on his family’s farm near Bethany, Mo., roughly 40 miles from the birthplace of Gen. John J. Pershing – leader of the U.S. forces in France in World War I. Buckles’ family moved to Oakwood, Okla., when he was 15, where he attended high school and worked in a bank.

Buckles joined the Army in August 1917 by claiming to be 18 and, when challenged, insisted that the only record of his birth was back home in the family Bible. This after the Marine Corps and the Navy each rejected the 16-year-old three times for being underage, underweight or flat-footed.

Buckles joined the ambulance service on the advice of a sergeant who told him it was a quick way to get to France. He trained in ambulance operations and "trench casualty retrieval," as he described it, at Fort Riley, Kan. Buckles sailed for England in December 1917. His detachment replaced a unit of the 6th Marines at a military hospital near Winchester.

He was finally assigned to escort an officer from another unit to France. Buckles served along the Western Front for the duration of the war.

Although less dangerous than the grim trench warfare of the time, driving an ambulance was risky and exhausting. Buckles was forced to grab sleep wherever he could. One night he took an unused bed in a field hospital and fell asleep talking to the man in the bed next to him, DeJonge says. When Buckles awoke, the man had died of the Spanish flu.

Armistice Day brought a different set of worries for the returning soldiers. "They were naturally wondering, ‘What’s going to happen to us?’" Buckles told videographer Sean Dunne in 2007. There was no VA, no GI Bill, and no veterans home-loan program when Buckles’ generation answered the nation’s call.

Buckles remained in Europe after the war and helped transport prisoners back to Germany. He returned to the United States in 1920 and left the Army as a corporal. "When I came back, the parades were all over," he said. "Nobody gave a damn."

He attended business school in Oklahoma City, worked for the post office, and then landed a job in the freight office of the White Star Line in Toronto. Buckles spent most of the next 20 years working on cargo and passenger ships in South America and other foreign destinations. Along the way, he joined American Legion Merchant Marine Post 945 in Jefferson, N.Y., and was a member of the Legion for nearly 80 years.

On a trip back to Germany in the 1930s, he met German military officers who told him that their country was equipping itself for another war, DeJonge says. After the ship landed, Buckles warned friends and fellow riders at a German equestrian club that Hitler would bring down their nation. He later bumped into the up-and-coming dictator in a Berlin hotel.

American President Lines sent Buckles to Manila in 1940 as a freight expediter. "Unfortunately for me, my stay was extended by the Japanese invasion of the Philippines in 1941," Buckles quipped. But his three years in the infamous Los Baños prison camp was the most grueling experience of his life. "He obviously witnessed the catastrophe of the war and the wounds and the aftereffects," DeJonge says. "But when he was a prisoner of war, he was in the middle of it for 39 months."

Starvation was the rule at Los Baños, and prisoners stopped weighing themselves when they dropped below 100 pounds. Buckles routinely gave his food to the children in the camp and plummeted to about 75 pounds. Buckles also witnessed atrocities, including the deaths of friends and fellow prisoners. "He still had nightmares about that," DeJonge says.

A couple of prisoners escaped in late February 1945, reached a detachment of the 11th Airborne, and warned them that the Japanese planned to execute all of the remaining prisoners because they had run out of food. The 11th Airborne parachuted in the morning of Feb. 23 as the Japanese soldiers did calisthenics in their loincloths. All 2,000 prisoners were rescued without a single loss. Buckles returned to his burning barracks to get the starched shirt, shorts and polished shoes he’d kept ready for his liberation. The burning building collapsed moments after he left, DeJonge says.

Buckles met Audrey Mayo in California after returning from the Philippines, and the couple married in 1946. They eventually moved to Gap View Farm near Charles Town, W.Va. Susannah Buckles Flanagan, their only child, cared for her father after Audrey died in 1999.

Buckles told her his war stories almost as life lessons, Flanagan said. He also "taught me the importance of knowing who you are, the importance of being independent and making up your own mind," she told Dunne in 2007.

In December 2009, as the oldest person to ever testify before Congress, Buckles advocated giving national-memorial status to the District of Columbia War Memorial. That campaign was born during Buckles’ March 2008 visit to the deteriorating monument.

"It was sad to take him up to the World War I memorial," says Staff Sgt. Gustavo Rodriguez, who was Buckles’ military escort during that visit. "You go all the way down the National Mall, past the World War II Memorial, and all of a sudden you see, down in the corner, a little memorial that nobody has taken care of."

That changed, thanks to a $2.2 million restoration project that started last fall. And it’s a fitting tribute to Buckles and all that his generation represents, Rodriguez says.

"People are in awe of him and all he’s done. He’s a national treasure."