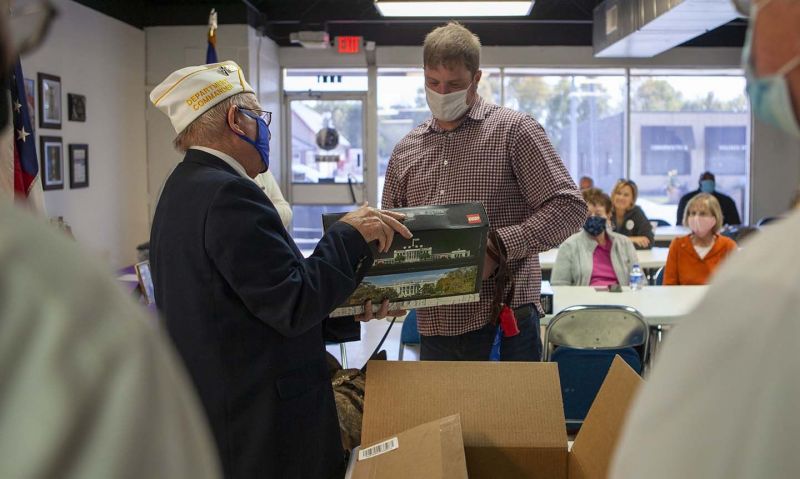 Adam Menin came across The American Legion’s Operation Comfort Warriors (OCW) program while renewing his membership on legion.org. The medically retired U.S. Army sergeant applied for a grant in hopes of receiving therapeutic recreation items to assist with his combat-related injuries, including post-traumatic stress.

Menin’s request of architectural LEGOs, movies and video games was granted and presented to him inside his American Legion home of Post 64 in Sioux City, Iowa, Oct. 5.

“Throughout my journey of dealing with issues from the war, I finally asked for help and now that I’m getting help and getting stronger I thought recreational therapy, LEGOs, is a calming, relaxing thing … it helps me cope with day-to-day life,” said Menin, who served in the Army from 1999-2006 and deployed to Iraq and Kosovo. “I deserve to be out in day-to-day life too. I deserve to be outside and walk around like everyone else, not just locked in my basement wanting to use alcohol.”

Menin received LEGO Architecture sets of the White House, U.S. Capitol building and the Lincoln Memorial – all American landmarks in Washington, D.C., that he hopes to visit and tour one day. The tiny LEGOs will help with hand motor skills that Menin needs due to a hand wound, while the video games will be a welcoming distraction when needed. “If I’m getting really stressed out and have a bunch of nervous energy, instead of tapping or pacing, I can divert that with playing the new games,” he said. “It’s all very therapeutic and very helpful.”

American Legion Department of Iowa Commander James Kessler presented Menin with the OCW grant at the post during a special ceremony for Menin, his wife Julie, stepson Alex and service dog Gunny, a German shepherd.

“It really meant a lot to me to present to somebody who has really struggled, that you don’t see on the outside. It was a special moment because it really meant something to him that somebody cared,” Kessler said. Following the presentation, Kessler and other Post 2 members visited with both Adam and Julie. “(Julie) broke down crying because she realized that people really do care about her veteran and the sacrifices he made. We, The American Legion, were able to give back to that. I know it was touching for his stepson, (Adam is) somebody he probably considers a hero in his eyes.”

Soon after medically retiring from the Army, Menin found a civilian job at the Carl R. Darnall Army Medical Center in Fort Hood, Texas. It was there that “the war literally followed me to my office,” he said. One of Menin’s roles on Nov. 5, 2009, was taking “bodies to the morgue” after the Fort Hood mass shooting by a former Army major. The mental health toll from the war in Iraq to the one that followed him home made Menin accept “that the old Adam died, he was never coming back. With my family I was like, 'this is the new Adam, this is what came back from the war.'”

The American Legion OCW presentation with his fellow Legionnaires and family members gave Menin confidence and hope. It “provided a sense of normalcy of what I used to feel before the war. I got to feel what the old Adam felt like 20 years ago,” he said. “I was like, 'no, the old Adam is still in there, he is still in my heart.' I just got a defibrillator put in so my heart is a little bit stronger now.”

Kessler felt that the presentation “brought a whole new meaning to the people (in attendance) about the reality of war, that it happened to one of our own.” Menin agreed and added that “the public also got to see what generations of military will do – one will take care of the other one even though one of them might have had a way worse homecoming,” he said. “The Vietnam vets at my post take me, our Iraq guys, under their wing as if I’m an equal even though we had different conflicts and how they got treated. If it wasn’t for them, I wouldn’t have put my uniform on. The public got to see that camaraderie between generation gaps like ours. The public got to see the camaraderie of what military veterans do.”

Kessler is a U.S. Air Force Vietnam-era veteran who served stateside but said “it’s the same token … we still served the same country, just in different colored uniforms, but for the same purpose. That’s what’s important to me. We served our country without question. So I would do it (present an OCW grant) again in a heartbeat. I would drive across the state of Iowa to ensure that a veteran got the proper recognition.”