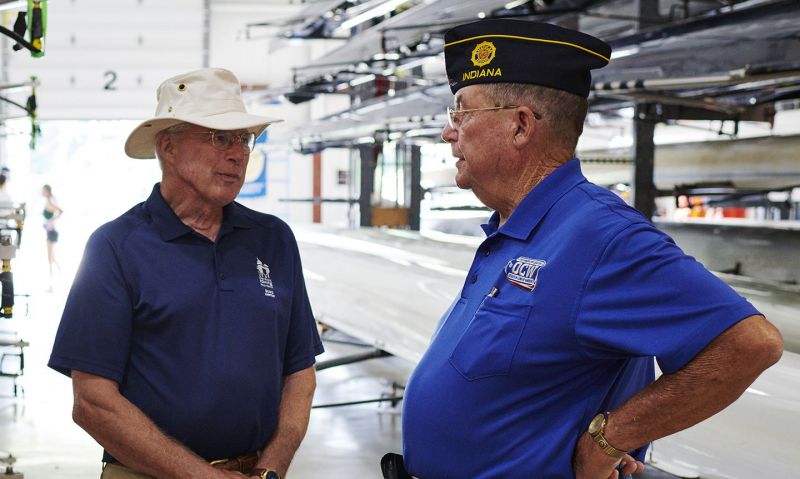 Past National Commander James Koutz speaks with Cleveland native and Vietnam veteran Bill Braun at the 25th Head of the Cuyahoga Regatta at the Cleveland Rowing Foundation in Ohio on Sept. 18, 2021. Photo by Angelo Merendino

In 2012, American Legion Past National Commander James E. Koutz raised over $1 million for the Legion’s Operation Comfort Warriors (OCW) program. He made OCW his primary fundraising goal as national commander, which helped put the program and its cause at the forefront of departments, districts, posts and communities nationwide. This awareness increased donations, as well as assistance requests from injured and ill veterans.

And his commitment to the program over the past nine years hasn’t wavered.

The American Legion reached out to Koutz to hear about his “why” for keeping OCW an ongoing priority. During the phone call, his support for the program was in action – Koutz was finalizing details for an upcoming softball tournament in his hometown of Boonville, Ind., that will benefit OCW.

OCW “is something we have to do. Because it’s taking care of our troops,” Koutz said. “We are always going to have injured troops and veterans that need help. VA hospitals are not going to buy them comfort items. But The American Legion can.”

Operation Comfort Warriors provides items that aid in the recovery and rehabilitation of wounded servicemembers and veterans whether they are recovering in military hospitals, transition units and VA medical centers, or at their home. When Koutz traveled as national commander to warrior transition units, he spoke with commanding officers about the items servicemen and women needed to “make them comfortable, try to get them rehabilitated faster. (And the requests of needed items) just went from there.”

OCW grant items have ranged from socks, clothes, video games, arts and crafts, televisions, iPads, sporting equipment, winter kits for homeless veterans, food, rehabilitation equipment such a recumbent bike or elliptical, tickets to baseball games and more. A recent $32,000 OCW grant to the Head of the Cuyahoga Regatta in Cleveland sponsored an eight-person shell boat, the oars and rack for its veteran race, along with a trophy that will be presented each year indefinitely to the winning team in the veterans race. Koutz attended this event and was elated with how OCW supported these veterans.

“It was great. The people couldn’t thank us enough for being there,” he said. “(Seeing amputees and visually impaired veterans rowing) was amazing. That’s the kind of things that we want to do. We want to help our active duty plus the ones that are needing help at these VA hospitals.”

To keep providing grants OCW relies on donations. And fundraising efforts for the program have remained strong over the years thanks to Koutz and his continued advocacy for OCW.

“I get excited when departments get in touch with me and ask if they can have Operation Comfort Warriors as their fundraiser. I say, ‘Yeah!’” Koutz said. He will be accepting an OCW check donation next weekend from the Department of Kentucky Auxiliary at their fall conference. “There’s been a lot of departments that have really rallied behind OCW. There are certain posts and districts that fundraise every year for OCW because they really believe in it.”

American Legion posts and districts within his home state of Indiana have been behind Koutz and believed in the cause of OCW since 2012. American Legion Post 64 in Indianapolis has held an annual OCW fundraiser since Koutz was national commander, raising hundreds of thousands for the program.

“Normally people stop fundraising after the commander’s year,” Koutz said. “OCW has caught on and it’s staying that way because we work it. We keep it going. And the more PR we get out about it, the better we are.”

Another reason why Koutz believes OCW remains a strong program of The American Legion is because 100 percent of donations go directly to supporting wounded and ill veterans and servicemembers.

“I think this is why people like OCW – they know that 100 percent will go to the troops. That’s why they stick with it. Money is going to stay with OCW,” he said. “And as long as we are serving active-duty soldiers and veterans, we will have OCW. That’s what The American Legion is about.”