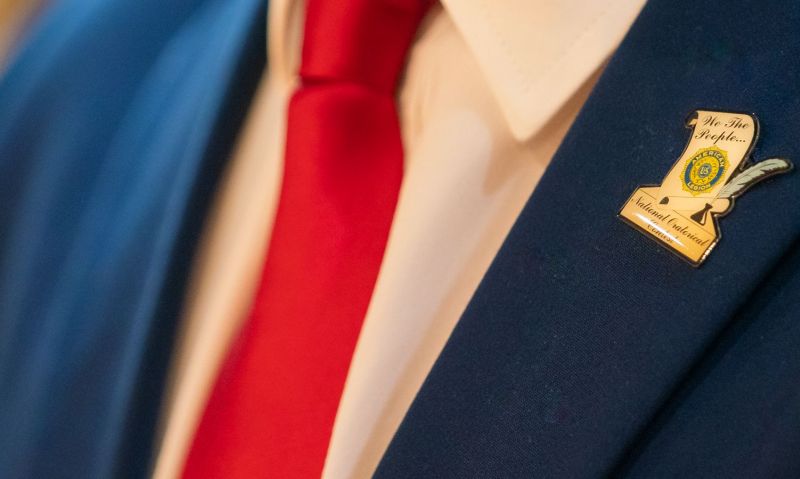 Three high school orators advanced through two rounds of competition in The American Legion’s 82nd National Oratorical Contest to earn a spot in the finals Sunday morning. Youth from Illinois, Iowa and Tennessee competed against 50 other orators from across the country who spoke on a 230-year-old document, the U.S. Constitution, to claim a spot on the national stage.

The contest got underway Saturday in Indianapolis with the quarterfinals, where 53 American Legion department Oratorical youth champions were separated into nine groups to present their prepared oration on the U.S. Constitution and speak on an assigned topic discourse – a phase of the Constitution selected from Articles and Sections – in front of judges, Legion Family members and family. Maue, Junker and Carnes were among the top nine orators to advance to semifinals, where they edged out the competition to become a top three finalists.

Junker said not advancing past the quarterfinals in the 2018 National Oratorical Contest is what helped him reach the national stage this year with his speech, “The Spread of Constitutional Apathy and How to Quarantine It.”

“I think that loss is what taught me how to edit my speech, how to be more confident, how to give my speech,” said Junker, who is sponsored by Post 403. “I learned a lot last year, and I think I really used that to my advantage this year. I’m happy to be spreading my speech and my message on a national stage.”

The focus of Junker’s speech is how youth today have little to no education on the U.S. Constitution and so “they just don’t care. They are not taught to care about the Constitution,” Junker said. “My big thing is teaching purpose. I think our society does not teach purpose to kids anymore or to really want to learn anything. I think the Constitution is worth learning.”

Carnes, a high school freshman who has done public speaking since fourth grade, didn’t know what to expect with The American Legion’s Oratorical Contest as she was the only competitor at her sponsoring Post 70.

“I really had no frame of reference, so I listened to the national winner (speech) last year and thought that I think I have this,” Carnes said. “Obviously it was good enough because here I am. I’m really excited about it.”

Her speech, “The Duties and Obligations of a Citizen Under the U.S. Constitution,” takes listeners back to Aug. 18, 1920, in Nashville, Tenn., to what became known as the “War of the Roses,” where supporters wore yellow roses to demonstrate their backing of women's suffrage while opponents wore red roses outside the Tennessee House of Representatives. The discussion was on the ratification of the 19th Amendment. Carnes focused her speech on Tennessee’s “vital role in ratifying the amendment” that allows women the right to vote. While not old enough to vote herself, Carnes said her “opinions and political perspectives do matter. Good citizenry is not age-restrictive.”

This is Maue’s first American Legion National Oratorical competition, and he “did not expect” to make it all the way to the top. His speech, “The Safeguard of Our Liberties,” focuses on “how American’s really don’t know the Constitution as well as we should, why the Constitution is so important, and what our obligations to it are,” said Maue, who is sponsored by Post 1080.

Maue stated in his speech that American’s “have a duty to uphold the Constitution and do what we can to elect leaders that will also uphold it. As Americans, preserving the Constitution is a way in which we can help secure the blessings of liberty to ourselves and our posterity.”

Since 1938, The American Legion’s Oratorical Contest has awarded more than $3 million in scholarships to high school orators. Nearly 6,000 youth from across the nation participate in the contest at the post, district and department level. For more information, visit www.legion.org/oratorical.