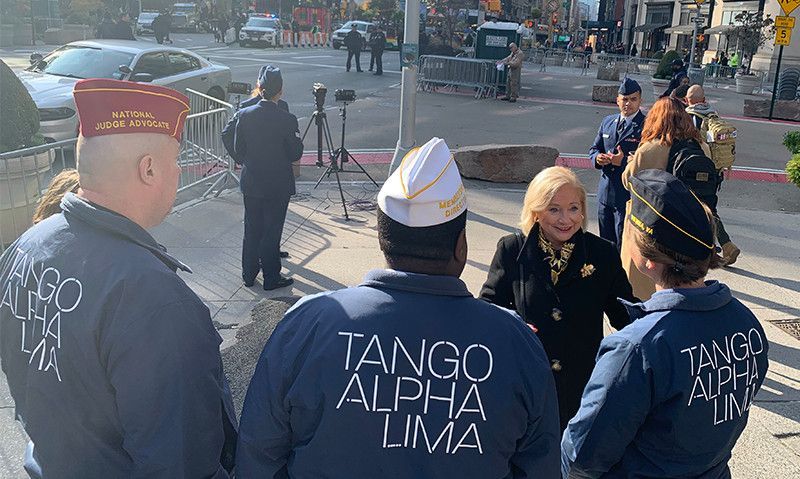 The American Legion’s Tango Alpha Lima podcast team met up with some old friends and made hundreds more on a sparkling fall Thursday when the New York City Veterans Day Parade struck up the bands once again along spectator-lined 5th Avenue.

One of the largest and oldest Veterans Day parades in the nation, the event was dramatically curtailed in 2020 – and viewership was largely restricted to online audiences – due to the COVID-19 pandemic.

“It’s always a special day in New York City – Veterans Day – a great day to come together and celebrate our veterans,” said one of the former Tango Alpha Lima guests, Frank Peters, past American Legion Department of New York commander and Staten Island Legionnaire who appeared during the show’s 20-20-20 series last summer to pay tribute to the 20th anniversary of the 9/11 terrorist attacks. “To be in New York City on Veterans Day is always something very special.”

Peters appeared on Tango Alpha Lima last August to tell his story of captaining the ferry boat John F. Kennedy from St. George, Staten Island, toward Whitehall Ferry Terminal on the morning the World Trade Center towers were hit; he immediately was part of the largest boatlift rescue operation in history that day.

The Tango Alpha Lima team of Mark Seavey, Jeff Daly and Ashley Gorbulja-Maldonado – all post-9/11 veterans – also met up with Wilem Wong of Lt. B.R. Kimlau Post 1291 in Chinatown, who also appeared in the 9/11 series in August and offered his unique perspective as a deployed Army reserve soldier in Iraq and Afghanistan, and as a New York Police Department officer.

On Thursday, Wong brought his children along and marched with his friends in New York City Police Department American Legion Post 460, while his heart was with those who could not in the city this Veterans Day. “We have over 210,000 veterans in New York City – in the five boroughs,” he explained to Tango Alpha Lima’s Daly in a live Instagram interview. “Even though we know it’s Veterans Day, we want to remember the 93 residents of New York City that died in the Global War on Terrorism, post-9/11.”

United War Veterans Council board member Mary Westmoreland, a member of American Legion Post 146 in Pleasantville, NY, explained to Gorbulja-Maldonado why she comes to the city for the Veterans Day Parade every year she can.

“As a veteran, it’s so important for me to be here to acknowledge my peers, my colleagues, what they have done,” the retired Army combat colonel said. “Who knows as well as we … what people have given and sacrificed, and their families? The other thing is, as a civilian, I am so grateful for the others, and I have so many to thank for that – other children, other mothers.

“I’m here for this unified feeling of pride and respect and appreciation. That’s it. That’s why I’m here.”

The podcast crew took a moment with parade Grand Marshal Kevin Carrick, who spent his Air Force career in life-saving operations as a pararescue “PJ” – a job that included action on Sept. 11, 2001, in Lower Manhattan.

Carrick said he had a scheduled day off on 9/11, but that did not stop him and 17 other PJs from converging and heading to the attack site as quickly as they could. “We were coming here, regardless of whether we had a tasking or not,” he said. “Eighteen of us were packing our stuff, and we were coming in here… the NYPD actually picked us up and flew us right to the site. We got here … a site that you’ll never forget.”

Carrick, who has been on alert but never deployed in a military combat rescue, has saved dozens of civilians’ lives over the years as a PJ. “Our particular job, which is very unique, is to go out and rescue people and save lives, whether it’s in the civilian world or in combat. We integrate with other teams. I’ve jumped out of airplanes and into the ocean for people … We go in any environment, anyplace on this earth. There are really no circumstances that deter us from going. We are capable and equipped to do any of them.”

Carrick’s Air Force career ran from 1978 to 2003, but 2021 was his first New York City Veterans Day Parade, he said. When the member of Riverhead, N.Y., American Legion Post 273 was asked to serve as grand marshal, he was both honored and humbled, he told the podcast crew.

“There’s a lot of good people around here – vets are all over the place,” Carrick said in the morning as things were just getting started. “Everybody wants to come say hello … I’m not really used to that. It’s very humbling to represent the biggest, strongest military in the world in the Big Apple … it’s just incredible. It’s a great honor to do this.”

Marine Corps veteran Nick Angione, chairman of the UWVC, estimated that upwards of 23,000 veterans and supporters, representing some 200 groups, marched, waved and shared their spirit of patriotism in Thursday’s parade, which was aired on Armed Forces Network, as well as online channels. The parade, he said, is meant to be shared with all veterans “not only in New York City, but every veteran in this nation. The goal here is to celebrate veterans on Veterans Day in the most magnificent place and capacity that we can.”

“You find people from all posts,” observed Phil Gilson, historian of Post 1847 at Breezy Point, N.Y. His reasons for being a regular participant in the parade: “The camaraderie of fellow Legionnaires – coming out to the parade and having total strangers stopping and saying, ‘Thank you for your service.’ We’re all in this together.”