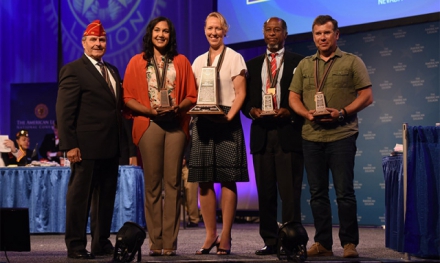 The Fourth Estate Award has been presented annually by The American Legion since 1958 for outstanding achievement in the field of journalism. Nominations in 2017 were considered in three categories: broadcast, print and new media (Internet).

Taking top honor in the broadcast category is Fox-affiliate KTVU. In an investigative series titled “Mental Hospital Hell,” the stationed revealed horrific conditions inside the John George Psychiatric Hospital in Alameda County, Calif. The report aired hidden video footage of patients sleeping and eating on the floor, with some of them moaning and crying for help in the overcrowded facility. The stories triggered major policy and staffing changes at the hospital, including the hiring of more doctors and nurses and the resignation of the hospital’s director.

The Arizona Republic is being recognized in the print category for its six month project that examined healthcare reforms and improvements for America’s veterans more than two years after it broke the initial story exposing a crisis of care, access and accountability at the VA Medical Center in Phoenix. The 2016 series included profiles of VA medical facilities across the nation. Scores of patients, VA employees, veterans advocates, administrators, policy makers and politicians were interviewed.

For its series “Gone,” The (Jackson, Miss.) Clarion-Ledger was recognized as best in the new media category. Reporter Jerry Mitchell helped bring suspected serial killer Felix Vail to justice thanks to his dogged reporting and exhaustive investigation. Mitchell’s narrative was displayed on a compelling website developed by Shawn Sullivan and helped launch an online documentary by Steve Elfers, which revealed evidence that Vail had murdered his first wife in 1962. His August 2016 murder trial marked the oldest conviction of a suspected serial killer in U.S. history.

“The American Legion has long recognized the vital role that the media play in contributing to society,” said Charles E. Schmidt, national commander of the 2 million member American Legion. “These Fourth Estate Award recipients are being recognized for outstanding works of journalism that not only stand far above normal media reporting, but have also resulted in outcomes that have positively impacted the lives of people and issues. These committed journalists have devoted long, hard hours into investigating, researching, writing and producing reports that have truly made a difference.

“I will be honored to present each of them with our highest recognition of journalistic accomplishment, The American Legion Fourth Estate Award in Reno this summer,” Schmidt said. “They are all credits to their occupation.”

Previous winners of the award include CNN, CBS, USA Today, ABC News, C-SPAN, the Pittsburgh Tribune-Review, and Life Magazine, among others.
The nation’s largest wartime veterans service organization, The American Legion was founded in 1919 on the four pillars of a strong national security, veterans affairs, Americanism, and patriotic youth programs. Legionnaires work for the betterment of their communities through more than 13,000 posts across the nation.
.