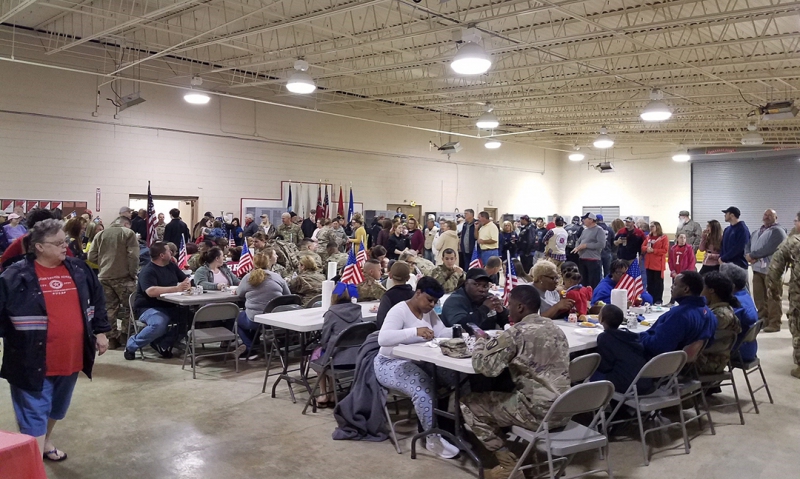 Perry A. Johns Post 6 in Corinth, Miss., provided breakfast March 24 for the 155th Armored Brigade Combat Team who will spend nine months in the Middle East in support of operation Spartan Shield.

During the weekly prayer breakfast conducted by Perry A. Johns Post 6 in Corinth, Miss., on March 21, former National Guardsman and post member Rickey Pope brought up that the local Company D, 138th Support Battalion was going to be leaving Mississippi early on March 24 to begin what will be a 12-month deployment.

The company is part of the 4,000-person 155th Armored Brigade Combat Team who will first head to Fort Bliss for a three-month training deployment before spending nine months in the Middle East in support of operation Spartan Shield.

Pope, who runs his own troop support nonprofit and whose son is deploying with the company, wanted to provide the company with snacks and drinks before they headed out of Corinth. But Post 6 Commander and American Legion Rider Tommy Watson had a different idea.

“Bobby McDaniel and I do the cooking for our prayer breakfast,” Watson said. “And we just looked at each other right at the same time and said ‘We need to cook for them.’ And so we offered to do that and went from there.”

The company was leaving out of the National Guard armory in Corinth, and because of the long deployment much of the armory’s equipment had been “stripped down,” Watson said. But that didn’t matter. “They’d already shipped stuff out, so we just packed up all of our supplies and utensils and cookware and food and went and did it."

With family members accompanying the Guardsmen, the post’s Legion Family provided pancakes and sausage for well over 100 people. A ceremony followed the breakfast, which included more than 200 members of the community there to show their support, and then the company headed out on their way to Fort Bliss. Members of the chapter’s Legion Riders provided an escort as the buses pulled away.

“I think it helps (the Guardsmen) to know that there are people at home who care,” Watson said. “Most of us who are my age, 60s and up, we individually left to go do whatever it was we went to do (in the military). There wasn’t a group of folks that went. There wasn’t really any support shown, except for your immediate family. All of these (Guardsmen) know that we’re here and we’ll be thinking about them when they’re gone.

“In addition to that, we got a whole roster of folks who have volunteered to help the families while the soldiers are gone – stuff like mowing their yards and doing minor repairs around the house.”

To watch a video of the Legion Riders providing the escort, click here.