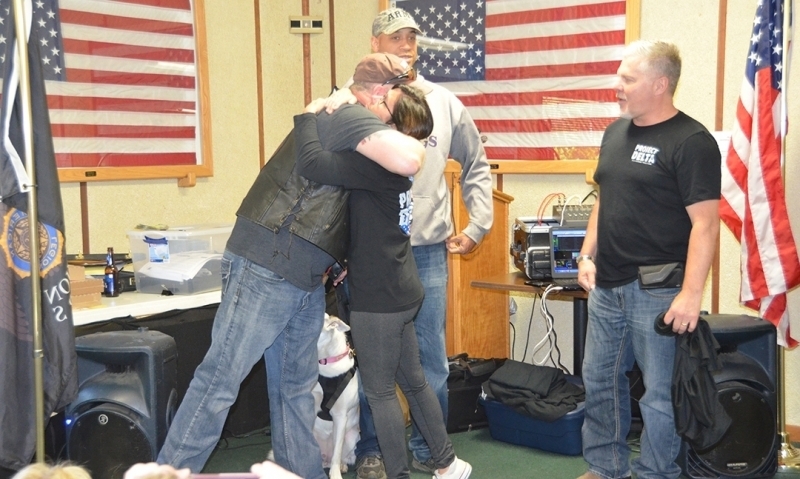 For founder and CEO Patti Robinson, a $15,000 donation from a group of Minnesota American Legion Riders to her organization Project Delta doesn’t just mean two more veterans will be paired up with service dogs.

“That’s basically two teams that I can start from beginning, to screening the veteran and screening the dog all the way up to graduation,” Robinson said. “That covers all the expenses, all the training, the potential housing.

“Being able to have this takes the burden off my mind, knowing that I have what’s necessary for not one, but two teams. That’s amazing. That takes so much pressure off me. When I found out, I was like ‘Are you kidding me?’ It’s just like a rush of relief knowing that two of the four veterans coming into the program, I’ve got covered.”

The $15,000 donation was one of three made on June 3 by American Legion Riders Chapter 560 in Zimmerman, Minn., to organizations that provide assistance to veterans battling post-traumatic stress disorder. Another $5,000 was donated to the Minnesota Veterans Home in Silver Bay, Minn., to help purchase a new pontoon boat raised Chapter 560’s donation total since January of 2016 to more than $100,000.

“The people that come out and support all of our causes, they’re patriots, and they care about the men and women that have served our country,” said ALR Chapter 560 Director Steve Andersen, who helped start the chapter in 2015. “People have really got behind our cause because there’s just too many stories out there where people are taking their own lives. We don’t want to see that happen. When people come home and take their own life, that’s another (killed in action) as far as I am concerned.”

The most recent donations were presented at the conclusion of Chapter 560’s second annual Veterans Benefit Ride, which saw close to 100 motorcycles and nearly 200 participants ride in 50-degree temperatures and gusting winds from Post 560 through Ogilvie, Minn., before ending up at the Veterans Club in Onamia.

Paula Anderson – a trainer with Patriot Assistance Dogs, which also received a $15,000 donation – said the money can be “life-changing” for a veteran battling PTSD. John Strohmayer – who served in the Army from 1989-2014 and has a dog, Apache, provided by Patriot Assistance Dogs – agreed with Anderson’s statement.

That Chapter 560’s Riders provided money for another veteran to get a service dog is “fantastic,” Strohmayer said. “It’s not cheap to raise these dogs and teach them how to do this. It’s great that there’s someone who helps with that cost so that it doesn’t cost us.”

Also receiving a $15,000 donation was Eagle’s Nest Healing, which provides housing, meals and recovery services to veterans dealing with PTSD. The donation will go a long way.

“$15,000 means 15 veterans have a place to live for 30 days,” said Melony Butler, chairman and director of Eagle’s Nest Healing. “Or it means a new boiler for a building that can house 23 more veterans. It’s a big deal. Most of our donations are $5 to $100. This helps us continue our mission to provide a place for healing.”

Butler said the Riders don’t just offer financial assistance. “The Riders … have gotten their boots on the ground,” she said. “Not only do they raise the funds to help organizations like ours … but they’re also there for us every day. I can call them if there’s a veteran who’s homeless and across Minnesota, and they will bring him right to us. That’s powerful.”

Andersen said his Riders group has tried to find organizations to help that focus on PTSD assistance. “These organizations are the hands-on,” he said. “I really want to highlight those guys because they change lives, literally.”

ALR Chapter 560 Historian Shelly Nelson said being a part of a Riders group that has done so much in a relatively short amount of time “makes you feel proud. We all work together and have a great group. We all try to pitch in and help. We’re all one big family.”

Andersen praised his group of 41 Legion Riders for what they’ve been able to accomplish in less than three years. “Our group is so dedicated to just make a difference and do what they can,” he said. “And nobody wants anything for it. It’s a special group of people, and obviously we’re making a difference.”