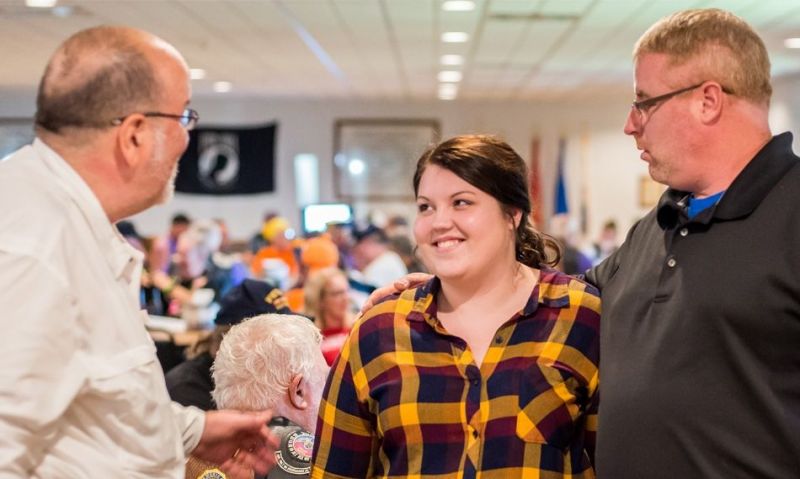 The American Legion Legacy Scholarship Fund provides college assistance for the children of U.S. military personnel killed on active duty on or after Sept. 11, 2001, as well as children of post-9/11 veterans with a combined VA disability rating of 50 percent or higher. The 2018 Legacy Run raised a record $1,300,804 for the Legacy Fund, the fifth-straight year the ride has raised more than $1 million.

Lee, who is 50-percent disabled, said that being unable to work his regular job, the Legacy Scholarship “means the world to me that I can, in some way, support my daughter going to college.”

Those words stuck with Legacy Run Chief Road Captain Bob Sussan, which is why Sussan has collected a list of Legacy Scholarship recipients in each of the seven states that this year’s ride will pass through, with the goal being to have at least one at each evening stop.

“I wanted the Riders to see the impact their efforts have on the kids,” said Sussan, chairman of the National American Legion Riders Advisory Committee. “It really shows what the Riders have done and continue to do to care for these children. Riders ride for the kids, and it’s really touching seeing these big, burly bikers that are doing this.

“You stop at these gas stations and people asked the Riders what they are doing, and they’re so touched by what (the Riders) do that they reach into their pockets and give us money at every gas stop. It’s a wonderful thing.”

This year’s ride will leave American Legion Post 347 in Lady Lake, Fla. – the nation’s largest Legion post – and travel through Georgia, South Carolina, North Carolina, Virginia and Kentucky before ending up at Kenneth N. Dowden Wayne Post 64 in Indianapolis. On Aug. 16, Harley Davidson in Lady Lake will have food vendors and a live band for the ride participants, with proceeds going to the Legacy Fund. And on the night before the ride kicks off, Post 347 will donate the meal for all participants of the Legacy Run.

American Legion National Commander Brett Reistad will accompany the ride, and in fact is getting his ride to the American Legion World Series via Legion Riders. The Run will stop in Shelby, N.C., on Aug. 20 for an afternoon parade in downtown Shelby, and afterward Reistad will be taken to Keeter Stadium for the ALWS championship game.

Sussan said that other highlights from this year’s ride will include a stop in Waycross, Ga., where the mayor, members of the local tourism board and possibly a Gold Star family will meet the Run; stops at lakeside posts in Gainesville, Ga., and Spartanburg, S.C.; a lunch stop at Cumberland Bowl Park in Jonesville, Va.; a dinner stop at Wildcat Harley-Davidson in London, Ky.; and a lunch stop at Post 9 in Madison, Ind., before the ride comes to an end in Indianapolis.

And on some stops, smaller flights of Legion Riders will visit American Legion posts in the area that are not scheduled for stops by the larger Run contingent.

“It looks like it will be pretty interesting,” Sussan said. “We’re engaging more Legacy Scholarship recipients. We’re (visiting) posts virtually everywhere. We’re starting from the largest post in the world. It should be a good ride.”