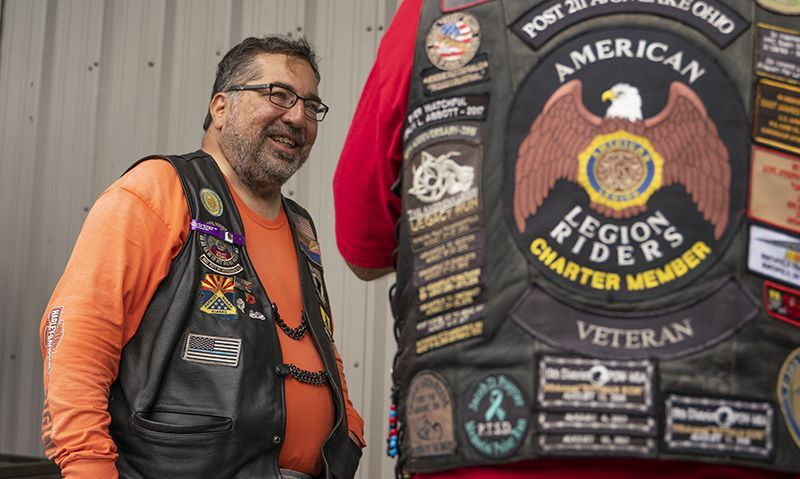 It took nearly 40 years for Vietnam War veteran Charlotte Wilson to join The American Legion after leaving the U.S. Army in 1980. But doing so – and becoming an American Legion Rider in the process – has made a difference for Wilson.

A member of American Legion Post 347 in Lady Lake, Fla., Wilson has become fully immersed in the Legion Riders, taking on multiple offices within a chapter that is just three years old but already boasts more than 100 members. She serves as the chapter’s secretary, road captain and membership secretary.

“It has been a healing process for me,” Wilson said of being a Legion Rider. “I have met some really great people. I am a passionate rider. Meeting other brothers and sisters and becoming a part of this, it’s just exciting.”

Lady Lake Post 347 will serve as the starting point Aug. 18 for the 2019 American Legion Legacy Run. Two days earlier, Wilson and other ride participants gathered 11 miles southeast of the post at Gator Harley-Davidson for a bike night put on by the dealership.

Wilson is taking part in her first Legacy Run. “It’s just a privilege and an honor to participate in this,” she said. “And leaving from our post – the largest post in the world – is overwhelming. And some of the Riders I’ve been meeting as they come in … from Alaska, Nebraska, Michigan, California, it’s just amazing how much that this ride to help the children of our fallen veterans, and post-9/11 veterans and their children is so important to us. I’m so stoked about doing this ride.”

At Gator Harley-Davidson, the Riders could purchase hamburgers, cheesesteaks and pulled pork, as well browse the large selection of gear and motorcycles, and get their motorcycles serviced. The night also included a 50-50 drawing, with money going from the drawing to The American Legion Legacy Scholarship Fund.

For Jan Wideman, Gator’s marketing manager and event planner, talking about the Legacy Run’s mission brings her to tears. She knows about that mission first-hand, as treasurer for nearby American Legion Mount Dora Auxiliary Unit 35 and a member of Post 35’s Riders chapter.

“It’s very emotional,” Wideman explained. “I’ve had a lot of dear friends who have been killed in action, leaving families behind. It’s really cool that we can have all these folks come in from all over … to support that scholarship fund.”

Wideman’s father retired from the U.S. Marine Corps after serving in both the Korean and Vietnam wars, while her husband Jim is a Navy veteran and past commander of Post 35. “(Serving veterans) is very passionate for me,” Wideman said, noting that mission extends to her employer. “We are very veteran-friendly here. John Malik, our owner, believes we really should honor our veterans. It’s very passionate for me to do this for (the Riders).”