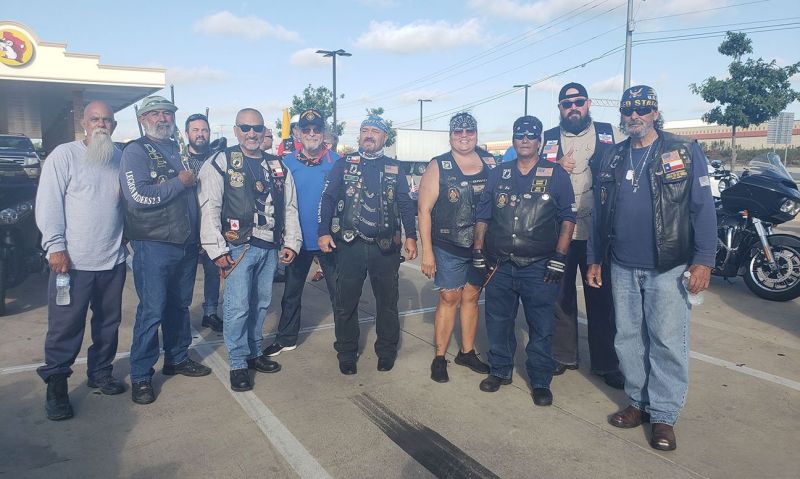 Legionnaire Jay Gonzales (third from right) was among a group of American Legion Riders who took part in a convoy to honor Vanessa Guillén.

The murder of Army Spc. Vanessa Guillén, and the alleged events leading up to it, sparked a national movement of sexual trauma survivors to share their stories publicly, including via social media platforms using the hashtag #IAmVanessaGuillén.

U.S. Army veteran and Legionnaire Jay Gonzales didn’t use social media to share her story. But she nevertheless has made it public. And it’s a story of being fed up with what she says is a problem that has gone on for decades.

There she was interviewed by Spectrum News about why she chose to ride for Guillén and then amplified her thoughts while speaking with The American Legion. Guillén served in the U.S. Army in the late 1970s, where she was sexually assaulted. Taking part in the ride was an easy decision for Gonzales.

“I think enough is enough, and something needs to be done,” Gonzales said. “Women have gone through this for so many years. The fact that everybody was saying (Guillén) was AWOL and what have you, and then come to find out she was murdered … for people like myself with a lot of terrible memories, it was just the right thing to do to be there to support her family and what they’re going through.”

Guillén went missing April 22 from Fort Hood; her remains were found around 20 miles from Fort Hood and identified over the July 4 weekend. Army Spc. Aaron Robinson allegedly told Cecily Aguilar – a civilian – that he killed Guillén "by striking her in the head with a hammer" while on base April 22, then smuggled her body to a remote site in Bell County, according to a July 2 criminal complaint filed by the U.S. Attorney's Office for the Western District of Texas. Aguilar allegedly helped Robinson mutilate and dispose of Guillén's body, according to the complaint. Robinson took his own life on June 30 during an attempt by police to apprehend him.

An attorney representing Guillén's family alleged that Robinson sexually harassed Guillén before he murdered her. Fort Hood and Army Criminal Investigation Command officials maintain that there is no credible evidence that Guillén was the victim of sexual harassment. Army Secretary Ryan McCarthy announced on July 10 that he has ordered an independent review of command climate and culture at Fort Hood.

The assault on Gonzales left her pregnant, and her Catholic faith convinced her to keep the child. “I chose to keep that child because I wasn’t going to take a life,” she said. “For me it was an everyday reminder, but I don’t look at it that way anymore. Once I got past it … I love my child. It’s a gift from God to me.”

Being around other veterans has helped Gonzales continue to heal while giving her a chance to continue to serve. She has filled a large role in Post 213’s efforts during the coronavirus pandemic. As a part of the Buda Veterans Alliance, Post 213 American Legion Family members have helped produce more than 11,000 facemasks for people in 22 states, 58,000 surgical mask ear relief straps for staff at more than 50 medical facilities, and delivered $800 in food vouchers to 16 families.

Legion 213 Commander and Air Force veteran Cassaundra Melgar C'De Baca also spoke with Spectrum News. A victim of both sexual harassment and sexual assault while in the military, Melgar C'De Baca said the Guillén case may actually lead to changes, but those changes have come with a steep price. “I feel horrible that a human being actually has to die for us to make changes,” she said. “At least now … the community, the military are saying it’s not OK. I would to see the military make changes when people make the (sexual harassment and assault) claims. I think that’s still a long road ahead.”

Across the nation, American Legion Post 18 in Weehawken, N.J., staged a candlelight vigil to honor Guillén. On its Facebook page, the post wrote “To all our neighbors, please continue to support our sister-in-arms' loved ones and join us in the work to ensure no military family ever again endures such horror.”