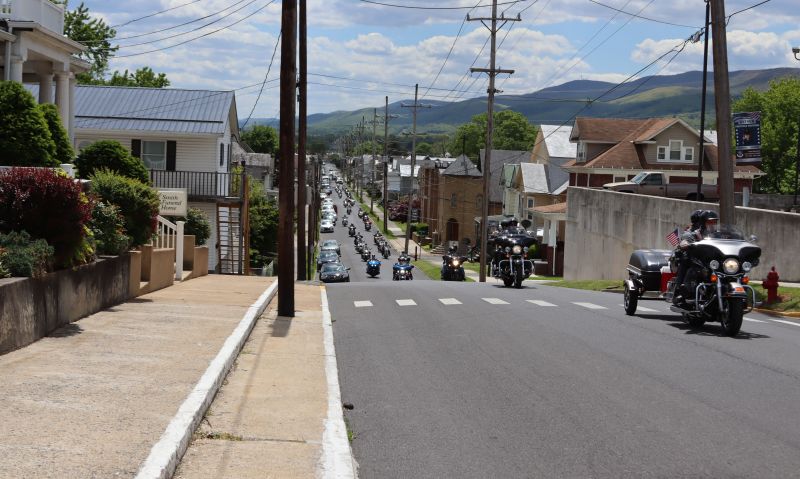 “There was just a misconception of what the Riders were in the department,” said Powell. “I thought the best way to cure that problem was let’s get them to work together.”

Powell and other American Legion Riders department leadership found a way to make that happen. On May 13-16, a group of mainly West Virginia Legion Riders that peaked around 70 motorcycles traversed more than 1,100 miles across the state in the department’s first in-state Legacy Run, making stops at Legion posts and collecting funds along the way.

Powell said in addition to raising money for The American Legion Legacy Scholarship Fund, he wanted the ride to do two things. “One, let’s get all the Riders in the department together to work toward a common goal,” he said. “Let’s open up the lines of communications with the Riders throughout the state.

“The other one was we have 140,000 veterans in the state of West Virginia. Let’s call attention to The American Legion. Let’s roll through these small towns and let everyone know that the Riders are part of The American Legion … and let’s use that tool to hopefully attract new members.”

The ride started in Follansbee May 13 and concluded May 16 with a homecoming dinner in Wheeling. Powell said he asked Assistant Department ALR Director Cliff Shingleton last fall to start working out a route for the ride. Final logistics were put in place in the past two months.

In addition to West Virginia Legion Family members, participants from Maryland, Virginia and Ohio also took part in the ride. Riders from Bellaire, Ohio, brought a $1,000 check to donate to the cause.

“This is the first year we did this, and I really think that next year this is going to grow exponentially,” Powell said. “People are realizing you can get a four-day ride in … and they get out and ride. And we saw some beautiful country. It was a great bike ride.”

Powell noted that the ride was greeted by local American Legion Family members and other area residents at each stop. One particular greeting stood out to him.

“We left Petersburg and were going down the road … and there’s a 12-year-old boy standing along the road rendering a hand salute to the Riders as we went by,” Powell said. “There wasn’t a parent in sight. Just him.”

Several newspaper articles about the ride appeared in local media outlets, but even more publicity came when the state Legacy Run was featured on a Fox News segment.

Powell said the ride has brought in around $13,000 so far, but more donations continue to be delivered. “But the awareness level of the Riders and The American Legion – look, when you wake up in the morning and find out that your story’s on Fox & Friends in the morning, I think that’s a home run,” he said. “When I get a call from a friend of mine or a relative of mine … who says ‘hey, I saw your ugly mug on ‘Fox and Friends’ … I think that’s huge.”

The ride also accomplished Powell’s goal of bringing American Legion Riders from all over the state together for a common goal. “This was a lessons learned,” he said. “But one of the greatest things about it is we met as strangers Thursday morning. By Thursday afternoon we were old friends.

“Cliff did a great job putting it together. I’m fortunate enough that I’m the department commander and it was my idea. They executed it extremely well.”