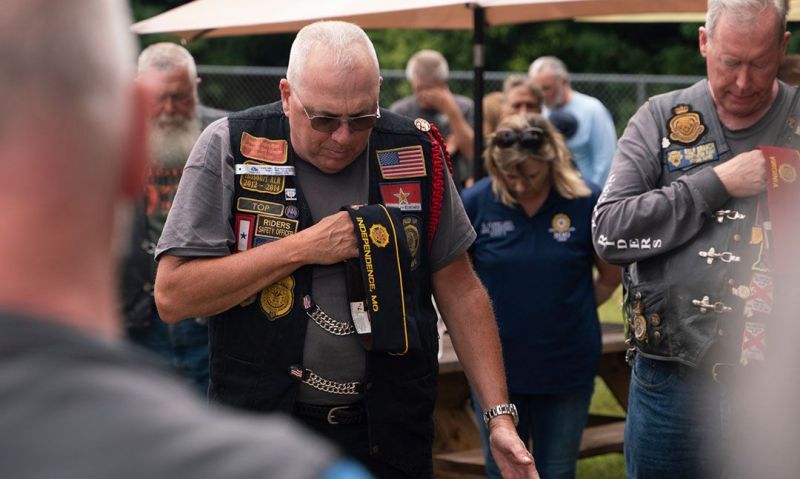 It was disappointing for Clark, who was slated to take over as chief road captain for the Legacy Run, as well as for the hundreds of American Legion Riders who travel from all over the nation – and sometimes the world – to participate in raising money for The American Legion Legacy Scholarship Fund.

But with active COVID-19 cases dropping and more and more Americans receiving the vaccination, the Legacy Run is back. The route has been announced, and registration is open.

Clark – a 16-year member of Tirey J. Ford Post 21 in Independence, Mo., a past Department of Missouri American Legion Riders director and the chaplain on the previous two Legacy Runs – spoke with The American Legion Media & Communication Division about what is was like having to cancel the 2020 ride and how excited he is about the 2021 Legacy Run.

The American Legion: You were set for your first Legacy Run as chief road captain last year. How difficult was it for you personally to have to announce the cancellation of the ride?

Mark Clark: It was incredibly disappointing last year, but we understood it. The safety of the riders is always going to be our most important concern, whether we’re riding or not. We’re always going to be placing their safety first. Was I disappointed? You bet I was. We put a lot of work into planning last year’s ride, and it was going to be an outstanding ride to be a part of. We had so many cool activities, and we were going to go through all these great stops. We had put our heart into it. When it was cancelled of course we were disappointed. But we just immediately shifted our focus to planning this year’s ride in the hopes the pandemic would be under better control.

Q: How nice is it to have the ride back this year?

A: We’re excited about leading this year’s ride. I’m excited about blowing (five-minute-to-departure) horn. There are so many people who touch this thing, and I feel an obligation to each and every one of them that has worked to getting us where we’re at so far on this ride, because they’re going to be a part of making it a success once we start rolling. I feel an obligation to do it right for the Riders out there who just want to ride. But I also feel an incredible obligation for the people that are working behind the scenes every day to make this ride possible.

Q: How much time and effort goes into planning a ride of this magnitude?

A: It really is a year-round effort. We take a break around the Christmas holidays, and then we’re hard at it again. Our (National American Legion Advisory Committee), they’re all involved in the planning. We’ve got our (National) Headquarters staff. It really is such a team effort. There are so many different people, honest to goodness it would be hard to list them all. The team that puts this thing together is really dynamic. It’s certainly much more than me. I couldn’t do this by myself. You can’t organize the logistics of a movement like this by yourself. This is especially true planning it in the middle of a pandemic. But between our national committee, our dedicated headquarters staff and the ride leadership that we’ve leaned on for many years … by the time the dust settles, we think we have a product that people are going to enjoy. We think it’s a route that will be safe, and we think it will honor the kids that we’re riding for. At the end of the day, that’s all we can hope for.

Q: What do you think some of the highlights of this year’s ride are going to be?

A: I think stopping at the national cemetery and riding through the Native American reservations and interacting with Native American leaders, I think that’s quintessential Western America. I think some of the beautiful landscape we’re going to be riding through. There’s a rugged beauty to the southwestern part of the United States that not a lot of folks get a chance to see. The memorials we’re going to visit are going to be fairly remarkable. Visiting some of these small Legion posts that are opening their doors and their hearts to us are going to be highlights of this ride. One of the things that this ride does for us that not a lot of other American Legion activities do is it allows us to get into communities that we otherwise would not be riding through. We can come in there together as an American Legion Family, bring some attention to The American Legion post in these small towns and communities, and thank them for what they do. I think we’ve put together a good ride.

Q: How important was it to get the Legion Riders out on an actual Legacy Run this year if the conditions were right for it, safety-wise?

A: It’s very important, I think, just from a mental health standpoint. Riders want to ride, and they really have a passion for this cause. I wish I could count all the emails, phone calls, text message (and) Facebook messages that I’ve received over the past two years expressing their enthusiasm for getting back on the road, praying that this ride could happen. The Legacy Scholarship Fund was established by The American Legion, but eventually it was adopted by the American Legion Riders. It has become their passion. They have a sincere desire to ride, not just to raise the money for the kids – that certainly is part of their priority – but they also recognize that the Legacy Run brings a lot of positive publicity to The American Legion and to the American Legion Riders. It signals to the community across the country, the American people, that The American Legion after 102 years is still vibrant, active and dedicated to doing what’s right for the community.

Q: What’s it going to be like to blow that horn, hear the motorcycle engines start to rumble and then pull out of Rogers on the first day of the ride?

A: I can’t wait to blow the horn and get us rolling. It’s going to be so gratifying. All the work that goes into this, to make this ride possible, all comes down to that moment. Everything builds to that moment. I’m going to be anxious. I’m going to be nervous. I’m going to be excited. I think everybody is. There’s going to be an excitement that goes through the entire contingent that are part of the ride because we’re going to be back in the saddle. This is what the Riders have been waiting for. They want a chance to get back out on the road as a Riders community and come together for a great cause. And on top of that, the Legacy Run’s like a big family reunion. We’ve missed all of our friends that we couldn’t ride with last year. We look so forward to seeing them all again this year. There’s going to be a lot of smiling faces.