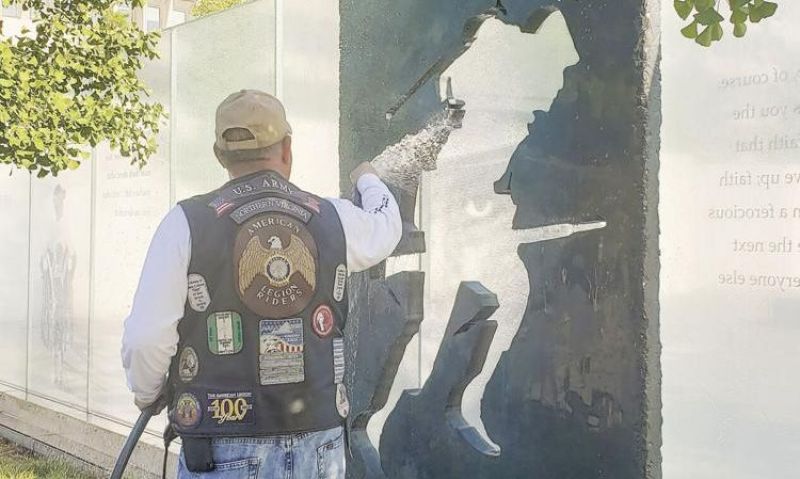 Department of Virginia American Legion Rider Forrest Lingenfelter first learned of the opportunity to assist in the cleaning of the newly created American Veterans Disabled for Life Memorial in Washington, D.C., in late 2014. He took part in the effort but wasn’t satisfied with making it a one-time occurrence.

Lingenfelter said he told his fellow Riders he thought “it would be a great thing for The American Legion to have responsibility for maintaining the American Veterans Disabled for Life Memorial. And starting in June of the next year we started doing it, and we’ve been doing it ever since. It’s an honor for us to do this.”

The clean-up efforts typically begin in April and run monthly through either October or November. Lingenfelter said he coordinates clean-up times with U.S. Army veteran James Pierce, who deployed to Afghanistan in 2012 and lost three fellow MPs during a suicide bomber attack, receiving permanent injuries in the process. Pierce now works for the National Parks Service and oversees the American Veterans Disabled for Life Memorial.

Lingenfelter said anyone can assist in the Legion Riders cleaning efforts, though it’s primarily done by American Legion Riders from Northern Virginia with additional support from American Legion Auxiliary Unit 1 in Washington, D.C. The group does with it can to clean the memorial’s granite and grass surfaces, clean up the reflecting pool and do some weed-pulling.

The Legion Family members weren’t able to clean the memorial during the COVID-19 pandemic and on June 12 made their first visit to the memorial in more than a year. It was good for Lingenfelter to return, considering what the memorial means to him and those who assist in the clean-up efforts.

“We do talk about how a veteran writes a check for up to, and including, their life,” he said. “I wonder just how many think that they’re going to put on that payment line a limb, two limbs, both legs. I don’t think that they see that. They see that as either ‘I go through (military service) and I come out well, or I have paid the (ultimate) price.’

“These folks … they can be visited in VA hospitals, going through transitions and all, and they can have a heck of a time in dealing with this handicap. It’s the least that we can do: maintain that memorial that has been erected in their honor.”