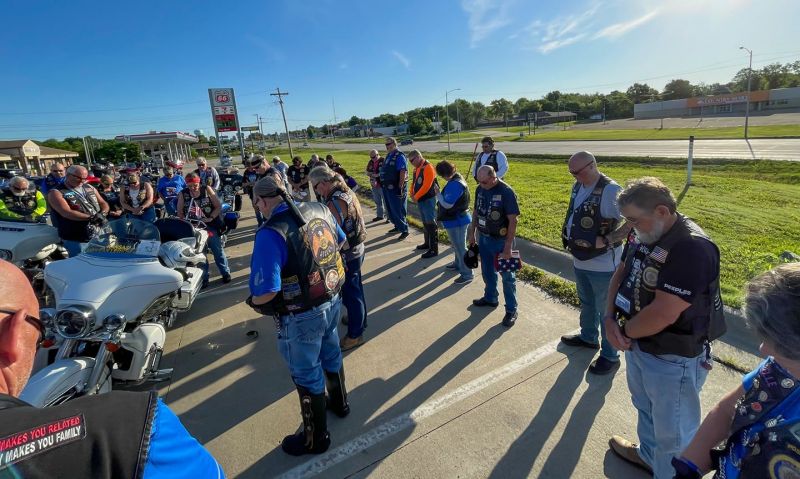 Raising money for The American Legion Legacy Scholarship Fund was one of the reasons Kansas Legacy Run Road Captain Terry Harris was happy the state’s American Legion Riders were able to get back on the road after cancelling the 2020 ride because of the coronavirus pandemic.

But for Harris, the Kansas Sons of The American Legion Detachment adjutant and a member of Squadron 180 in Great Bend, the ride is also about friendship and camaraderie.

“It was great – not only the run, but the people. The people are what make this run,” Harris said. “Old friends, new friends, you know how that is with the American Legion Family. And also, being able to visit posts, get into the posts, have them talk about the history of their post, that’s what it’s all about.

“On the Saturday night (of the ride), everybody gets together for pretty much the entire evening and tells stories. One of the things is how did you get your Rider name. You either do something good or you really mess up to get a Rider name.”

Kansas’ 2021 Legacy Run took place June 10-13, starting in Great Bend and finishing up at Post 174 in Ellsworth. Averaging around 45 motorcycles a day – including six from Oklahoma – the ride made stops at 11 American Legion posts and 10 veterans memorials to perform wreath-laying ceremonies. By the end of the ride nearly $32,000 had been raised for the Legacy Fund.

Harris made sure those on the ride know the cause behind it. He said he reached out to Kansas natives who have been recipients of the Legacy Scholarship. Two of those – one the child of a 100-percent disabled veteran, the other who was 12 years old when his father was killed in action – recorded videos on what the scholarship meant to them.

On the first morning of the ride, Harris showed the videos to the participants. “We played those right before we walked out the door, just to give everybody the idea that that is why we’re doing this,” he said.

The following are recaps of in-state Legacy Runs that already have occurred, as well as future dates of some coming down the road.

The department’s sixth in-state Legacy Run included between 65 to 80 motorcycles and raised around $8,000 so far. The ride took place June 12-15. Click here for more coverage.

The second weekend is scheduled for Aug. 13-15, departing Rushford and finishing up in Hopkins.

Ohio’s American Legion Riders debuted their in-state Legacy Run in 2019 but had to take 2020 off because of COVID-19. But the ride was back on this year, despite the challenges of coming back from an off year for the ride.

“We had everything planned (for 2020) … and then we had to hold off, so to speak, for a couple months hoping the country would open back up. And that didn’t happen, either,” said Eldon Witter, Canton Chapter 44’s ALR director and one of the road captains for the state Legacy Run. “We moved it to this year, and we made it a plan that we’d do it rain, snow or shine.”

Around 30 participants started the ride, while another 30 joined along the way. “What we did is we made sure that we had registration open at every single post we stopped at, which made it a little bit easier for people to join us,” said Witter, Ohio’s 10th District ALR liaison.

Witter said members of Chapter 44 – which was chartered just two years ago – rotated as ride captains and tail gunners and that Chapter 44 Assistant Director Darren Teis was responsible for mapping the route and reaching out to posts along the route. “I’m so proud of him for doing all this,” Witter said. “Every chance I get I’m going to give him kudos because I’m proud of what my (chapter) has done.”

The effort was able to bring in $6,000 for the Legacy Fund. “We wanted to do something on our own … and just through (the in-state ride) was the next step,” said Witter. “We were able to raise a decent chunk of change.”

To watch video of the Ohio Legacy Run, click here.

Oklahoma’s American Legion Riders were able to safely conduct their first in-state Legacy Run last year. This year the ride will travel through Southeast Oklahoma July 8-10, starting at the Norman Veterans Center and finishing up in Shawnee.

So far, 210 participants have signed up for the Virginia in State Legacy Run, which will depart Fredericksburg June 25, make an overnight stop in Danville and then finish up June 26 in Norfolk. A kickoff event will take place June 24 at Stafford Post 290.

This year the Virginia American Legion Riders have added a new fundraiser to the ride, one that is rather timely: a bug splat target for each participant’s motorcycle to keep track of any cicadas who might get in the way of the ride. Multiple rules are in place for the fundraiser, including no using other cicadas as bait and no wiping bugs off fellow riders’ bikes.

Prizes will be awarded to the closest to the center of the target, the biggest splat and the most splats, as well as a few special awards.

On May 13-16, a group of mainly West Virginia American Legion Riders that peaked around 70 motorcycles traversed more than 1,100 miles across the state in the department’s first in-state Legacy Run, making stops at Legion posts and collecting funds along the way. More than $13,000 was raised during the ride.