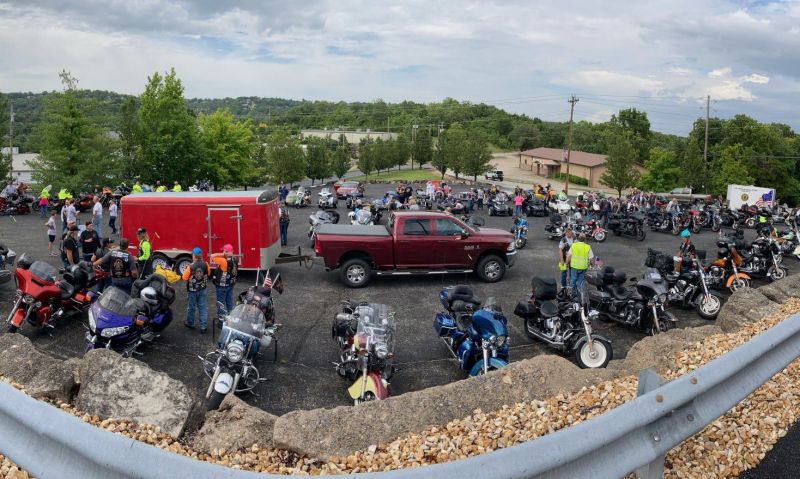 As the 2021 Legacy Run approaches – if you haven’t registered yet, you can do so here – more and more American Legion departments are staging their own in-state Legacy Runs to bring in money for The American Legion Legacy Scholarship Fund.

The Department of West Virginia staged its first-ever state Legacy Run in May, raising over $15,000. Kansas also had another successful state ride, bringing in around $32,000. The efforts have earned the praise of National American Legion Riders Advisory Committee Chairman Mark Clark, who will serve as the national Legacy Run’s chief road captain Aug. 22-26.

“I couldn’t be prouder of the resilience of the Riders across the country,” Clark said. “I tip my cap to the Riders of every department that hosted a legacy ride so far this year and wish all others planning one great success. Riders always answer the call and put their passion for the children to work each and every year, and it makes my heart swell with pride.”

Clark, a member of Tirey J. Ford Post 21 in Independence, Mo., didn’t have to look far to find a state Legacy Run in his area. His own department staged their seventh annual in-state ride June 25-27 through Southwest Missouri and had as a special guest National Vice Commander Richard Heigert, who rode all three days. To date, the donation total raised is just short of $80,000.

“I am always proud of my home state riders,” said Clark, the department ALR director from 2012 to 2014. “They put on one of the most organized rides in the country, and our department really embraces the annual ride. It is easy to rest on your laurels after you have some success, but the Missouri Riders always look to keep the positive momentum going from year to year. I am proud to call myself a Missouri Rider.”

Norris, a member of American Legion Post 331 in St. Robert, Mo., said it’s the cause behind the national Legacy Fund – the Legacy Scholarship Fund – that drives both him and other Missouri Legion Riders.

“Missouri being a big military state, I just think everybody believes in helping the children. Every one of us ride for that cause, and every year it keeps growing and growing,” Norris said. “One of the reasons I got into it is I’ve got three cousins … and their father was killed in Vietnam. I talked to the oldest cousin, and she said that if something like (the Legacy Fund) had been available for them when they were growing up … it would have changed their lives immensely.”

The route traversed 442 miles, with 14 stops that included American Legion posts and the Mt. Vernon Veterans Home. A year ago, due to social distancing, the Riders provided a motorcycle parade around the Missouri Veteran’s Home in Warrensburg on the state Legacy Run. A similar parade took place this year in Mt. Vernon.

“We want the older veterans to know that they’re not forgotten,” Norris said. “It’s our way of thanking them for what they did for us.”

Norris said planning for an in-state ride starts as soon as the previous ride ends. “We’re actually meeting this Saturday to discuss (the 2022 ride),” he said. “It takes a good year to really get everything rolling.”

“What has happened with the ride is people starting to believe,” said Gunn, a member of American Legion Post 284 in Colonial Heights. “What has happened is that Riders themselves have started to believe in the (state Legacy Run). Before, I couldn’t get people … to commit. Now, I’ve probably got over 100 volunteers that can’t wait until next year already. I’ve got seven … different posts and one motorcycle place that said ‘please come here (in 2022).’ That’s pretty good.”

Gunn said this year’s in-state ride has approached $40,000 for the Legacy Fund. Those donations will be presented during the national Legacy Run.

Along the way during the in-state rides, Gunn said, locals want to contribute to what the Legion Riders are doing. He pointed to a morning kickoff in Danville this year in which a “preacher” jogging through a nearby park asked why the Riders were assembled.

“The preacher reaches into his pocket and pulls out a $50 bill,” Gunn said, noting the preacher also included a business card that didn’t have his name – only the name of the church itself.

The donation ended up with Gunn telling the other Riders that the donation was “sent from God” and said “if the Lord can send $50 this way, the least we can do is somebody can match it so we can have a $100 donation.”

That ended with the Riders in the group adding another $2,000 in donations that came in on the spot. “That started with just a pastor,” Gunn said. “I called it the ‘Pastor Challenge.’ Everyone was so motivated. To raise $2,100 to not really ask for any money … it was less than two minutes. It was really cool.”