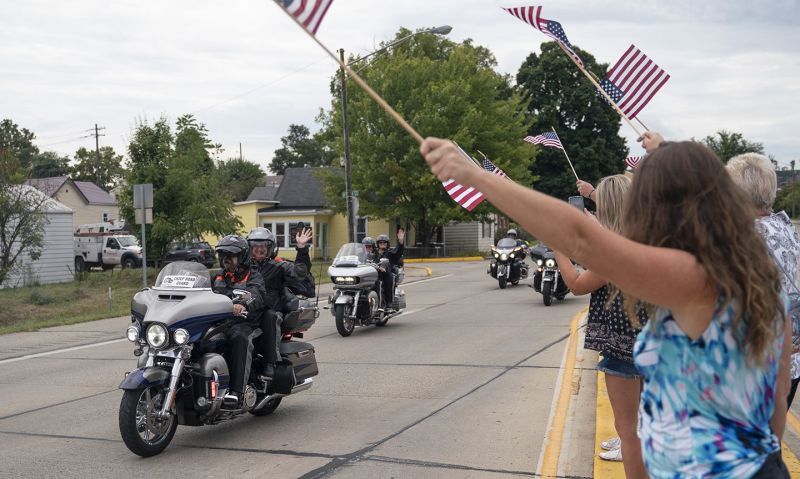 And while the cause itself is one the Riders have taken on as their own, raising more than $11.5 million since 2006, being able to stage this year’s ride after the 2020 edition was forced to go virtual is a source of relief and happiness for the participants.

“It’s very surreal, because there are so many uncertainties surrounding the COVID pandemic and what that would look like across the five (American Legion) departments we’re going to ride through,” said National American Legion Riders Advisory Committee Chairman Mark Clark, the Legacy Run’s chief road captain. “There’s been a lot of anxiety in the Riders community about whether or not we were going to be able to make the ride go. I wish I had a dollar for every question I’ve gotten – ‘Is the ride going to go?’

“Our dedicated Riders really want the opportunity to ride for the kids. There was real doubt early on about whether we could make this happen because of the COVID pandemic.”

The 2021 Legacy Run will leave Rogers, Ark., on Aug. 22 and finish up in Phoenix, traveling through Oklahoma, Texas and New Mexico before entering Arizona. The ride will include passage through tribal lands throughout the West, including the Choctaw Nation and the Tonto Apache Tribe. A complete route schedule can be found here.

Clark said it was important that the Legacy Run acknowledge the sacrifices of Native Americans who’ve served in the military. Stops along the ride included a wreath laying ceremony at Choctaw Nation Veterans Cemetery and a memorial service with Salt River Pima Maricopa Indian Community (SRPMIC) tribal leaders at the USS Arizona Memorial Garden.

“Anybody who served in uniform has to have respect for the Native American community,” Clark said. “Not only do they bring a unique talent set … to the military, as the code talkers represented, but also when you take a look at the per-capita representation in our armed forces compared to the population of the Native American community, it is incredible how dedicated and loyal they are to defending a nation who early in their tribe’s history didn’t treat them particularly well.

“The Native-American community has not received the best of treatment over the time that America has been a nation. Yet they still remain loyal to the cause of defending this country … to be willing to lay down their life and limb to defend their way of life. Who can’t respect that? There’s no way we ride through Native-American communities without stopping and pausing and paying respect to the warriors in their community who have donned the cloth of the nation and signed their name on the dotted line … basically signing a blank check payable up to and including the sum of their life to defend our nation.”

Money raised prior to and during the Legacy Run goes to the American Legion Legacy Scholarship Fund, which provides college scholarships to children of U.S. military personnel killed on active duty on or after Sept. 11, 2001, as well as children of post-9/11 veterans with a combined VA disability rating of 50 percent or higher. Now in its 15th year, the fund has collected more than $11.5 million dollars since 2006.

Being able to gather again for that cause is meaningful for Clark. “I think probably the most special thing about this year’s ride is just getting everybody back together,” he said. “There’s something special about the American Legion Riders and the dedicated folks that have a passion for riding for these kids.