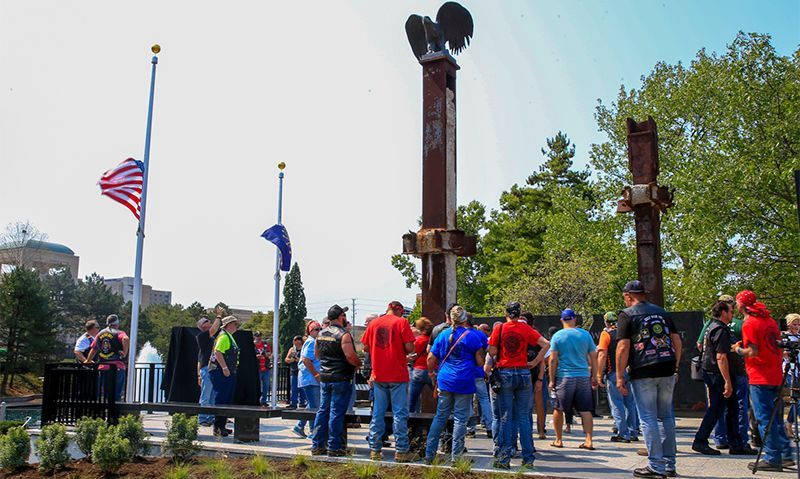 American Legion Riders gather at the site of the Indiana 9/11 memorial in downtown Indianapolis on Sept. 11, 2021 photo by Justin Casterline

Indiana Legionnaire Mike Brady was in Tennessee on Sept. 11, 2001. And in addition to the terrorist attacks on that day and the lives lost because of them, 9/11 also means something else to him.

“I didn’t know what the hell was going on,” said Brady, a member of Eugene Pate Post 265 in Evansville, Ind., and a Rider from Kenneth N. Dowden Wayne Chapter 64 in Indianapolis. “But at that time, two of my sons had just enlisted in the Army, and my third was about to. So (9/11) means a lot to me because of them. They served in Iraq and Afghanistan. They’re all home safe, praise God.”

A U.S. Army veteran, Brady enlisted in the National Guard following the attacks, despite being 40 years old at the time, and served three years. Now, he serves as Indiana American Legion Riders director and helped organize the 9/11 Remembrance Ride, a Sept. 11 effort that had more than 460 motorcycles – including hundreds of American Legion Riders from Kentucky, Ohio and other states – depart the Indiana American Legion Headquarters to the Indiana 9/11 Memorial in downtown Indianapolis to help mark the 20th anniversary of 9/11.

“The result of this has been unreal,” Miller said. “And it’s not really about The American Legion today. It’s about America, it’s about the memorial, what happened 20 years. And you can see what it means to people.”

Brady said it was the biggest event the Indiana ALR has coordinated at the state level and allowed them and other Legion Riders to do “what we do best, and that’s riding motorcycles and raising money. It’s right up our alley, and I’m real, real proud of the support we’ve got from our posts and our chapters. I couldn’t be happier.”

David Stockburger, a member of American Legion Post 147 in Jasper, Ind., rode with a group of Legion Riders more than 130 miles to take part in the Remembrance Ride.

The reason? “You have to remember,” he said. “It’s part of our history. Too many people forget what this country’s been through, and this is one of those events we don’t want to forget.”

Seeing the large turnout was “fantastic” for Stockburger. “This is why we are The American Legion. We stick together. It doesn’t matter whether you’re Army, Navy, Air Force, Marines, whatever. We’re a part of a big family. And it’s great to see everybody get together to honor such a great event.”

It was a similar feeling for Bobby Wiggins, a U.S. Army veteran and member of American Legion Riders Chapter 119 in nearby Greenfield, Ind. He said the turnout for the ride “was just phenomenal – this many people coming from all over Indiana. It’s to not forget. It’s remembering what happened and not let it happen again.”

For Mark Clark, the American Legion Riders Advisory Committee chairman, getting a chance to take part in the Remembrance Ride was well worth the 470-plus miles he traveled from outside of Kansas City to Indiana.

Clark, who retired from the U.S. Air Force, deployed to both Afghanistan and Iraq. “I had a couple of my young men in Iraq that didn’t get home alive,” he said. “I ride today to honor them and all those who have served.

“Also, as a past federal law-enforcement officer, I have a great of respect for the first responders who lost their lives on 9/11. Today, we have a chance collectively to say ‘thank you.’ To let their families know we haven’t forgotten them. And to let the communities know this memory needs to stay alive in their minds.”

The destination for the Riders was downtown Indianapolis for a ceremony rededicating the city’s 9/11 Memorial. Former Vice President Mike Pence and Indiana Gov. Eric Holcomb were among the speakers during the ceremony, as was Teri Maude, the wife of former Army Lt. Gen. Timothy J. Maude.

Timothy, an Indiana resident, was working at the Pentagon on the day of the terrorist attack. He was the highest-ranking servicemember killed that day. A plaque was unveiled at the Indiana 9/11 Memorial bearing the same epitaph on Maude’s gravesite at Arlington National Cemetery: “He took care of Soldiers.”

“Tim loved the Army. He loved taking care of his soldiers and their families,” Teri said. “That was his passion – making sure that every decision the Army made was made with that soldier and his family in mind.”

Department of Indiana Commander Mark Gullion helped present the $50,000 check to the 9/11 Memorial in 2020. Standing a few feet from the memorial on Saturday afternoon, he said the Remembrance Ride “exceeded my expectations. The patriotism of all the people that came here today is outstanding. (Today) brings back a lot of memories. I retired from the military and tried to come back, and they wouldn’t let me. I was too old. So today is to honor all those people who answered the call.”

Following the ceremony, many of the ride’s participants headed to American Legion Post 64 for dinner and entertainment. Miller said if you asked those who took part in the ride what 9/11 means to them “I’m sure each and every one of them has a personal feeling toward it. All I can say is that every one of these people … on the front or on the back (of their vests or jackets) have an American flag. Today, that’s what it’s about.”