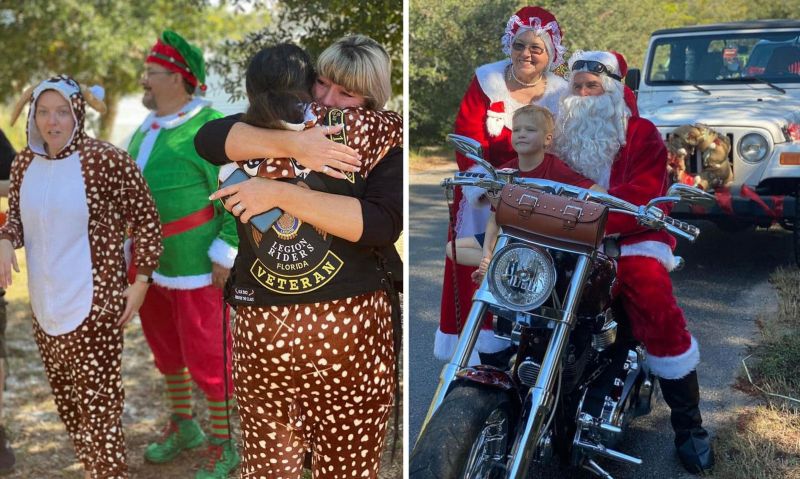 For seven years, American Legion Riders Chapter 382 in Navarre, Fla., has staged a Ride for the Claus that distributes Christmas presents to local children on the first two weekends in December. The past four of those, ALR 382 Director Jason Skobel has been involved.

And he still remembers a piece of advice he received prior to his very first Ride for Claus.

“I was told, ‘make sure you have dark sunglasses,’” Skobel said with a laugh. “Because tears will be flowing.”

Skobel said it’s because of the reactions he and the other Legion Riders get from their effort. On each ride, the Riders deliver toys to families struggling in some way. The event started when members of Chapter 382 realized there was a need for a Christmas toy program for Santa Rosa County families in need. Since then, the chapter has delivered thousands of dollars in toys each year.

“We fund raise all year. This the biggest event of the year that we do for children and youth,” Skobel said. “Usually in October and November we start purchasing toys and gathering the names of kids around the community. We get them from schools. We get them from daycare. Sometimes these people hear from neighbors that we’ve delivered to and ask, ‘how do I get on the list?’”

The list starts with a very specific group but then expands. “Low-income (families), special needs and Gold Star families – that is our priority,” Skobel said. “But we don’t turn anybody down. If they call us, they’re going to get put on the list, and we’re going to show up in front of their house.”

Some of the Riders dress up for the deliveries, including as the traditional toy deliver himself. And any children along the route that request a toy are provided one.

“We make sure that we have enough gifts for those that sign up or that we get names for, and we usually buy two to three times as much extra gifts,” Skobel said. “When you pull up on a street with 20-30 motorcycles and a Santa Claus, reindeer and elves, kids come out of the woodwork from all the houses. We don’t want to turn anybody down. We buy a lot of extras, all age ranges, so we can accommodate any kids that come out onto the street to see what we’re doing.”

The Riders distributed around $4,000 worth of toys last weekend and expects to add another $2,000 or so after this weekend’s delivery. A total of 60 families and around 220 kids – in addition to another 80 or so children who get presents along the way – will be impacted by this year’s Ride for the Claus.

Skobel said there are so many touching moments during the ride, but one stood out this year: a mother who’d lost her job in the service industry during the pandemic and reached out to the post for help.

Skobel said the mother sent a text to his wife on the day of the Ride for the Claus. “She told her how much this meant to her and that this was going to be the only gifts her son receives this year,” he said.

While the ride itself is a Chapter 382 program, Skobel said the effort receives support from all facets of the post’s American Legion Family. “I have to give a big shout-out to our (First District) commander, Sonny Decker, and our post commander, Israel Root, who have just preached Legion Family,” he said. “Yes, we have certain things that (are separate), but we in the last year we have come together as a Legion Family and made all of our events better.”

An Air Force veteran who also is a member of Post and Auxiliary Unit 382 – and has applied for membership in the post’s Sons of The American Legion squadron – Skobel said being a part of the Ride for the Claus is one of his highlights of the year.

“We give the parents a heads up, saying, ‘hey, we’re 15 or 20 minutes out from your house,’ so they kind of prep their kids and get them ready,” he said. “Some of them are waiting outside. When they hear the motorcycles and see a Santa get off, some of the kids come running from the front door through the yard. They just want to give Santa a hug. We had one little girl say, ‘Santa, where have you been? I missed you last year (because of COVID restrictions).’ It’s a tear-jerker. The goosebumps you get …”

And the program is expanding. “This is the first year we’ve had a surrounding post participate,” Skobel said. “Post 235 in Fort Walton Beach, they have sent some of their guys over to ride with us. This is something they want to start doing. Next year we’re going to try to make this even bigger. There are three posts within 20 miles of each other. So we want to make this something next year where all three posts get together.”