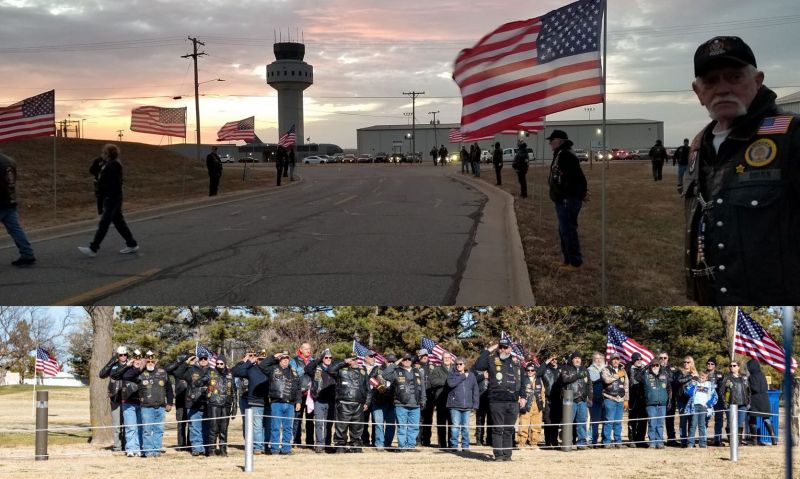 After he died on Dec. 5 and arrangements were made to honor him in his home state, members of the Kansas American Legion Riders were asked to provide eight U.S. flags in the small Kansas town of Russell to honor former U.S. Sen. Bob Dole, a World War II veteran and 71-year member of Post 99 in Russell.

But the Riders wanted to do more. Much more. And they did.

Dole returned to Kansas on Dec. 10. Waiting for him in Salina and then providing honors along the way to Russell and then Topeka the next day were American Legion Riders from more than a dozen Kansas chapters, manning flag lines and rendering salutes as Dole’s casket and family passed.

“It was amazing what we did,” Kansas American Legion Riders Committee Chairman Roger Beckley said. “We did four missions, basically, and put them together in 24 hours in three different locations in the state. We’d all kind of been on standby for a long time, knowing (Dole) was going to pass. But this kind of hit us really fast.

“I just kind of talked to people and ID’d people that could make this happen, and then we just started flooding Facebook and email, telling people, and boom. And this whole thing happened because of teamwork with a capital T. It wasn’t one guy or four of us doing this and this and this. It was everybody all together doing their piece. That’s what makes me proud … the amount of teamwork and camaraderie that was shown.”

After Dole passed on Dec. 5, Beckley said he got a call two days later from Ray Palmer, the director of ALR Chapter 173 in Hays, who had been contacted by the funeral home in Russell to see if the Riders could provide a small flag line outside of St. Mary Queen of Angels Catholic Church. Palmer immediately said yes, but in their ensuing conversation Beckley suggested doing more. Palmer agreed, and planning began.

Beckley went to see the funeral director and said the Riders could provide a flag line along Highway 40 “as far out of town as we can get them. And he just looked at me with a big smile.”

On his drive home, Beckley said he started thinking about Dole’s arrival in Salina on Dec. 10, which led him to reaching out to the airport about placing a flag line outside of the airport. He reached out to Kansas ALR Area Director Stan Britt, who was able to coordinate setting up a flag line to greet the arrival.

In the meantime, Legion Riders in Topeka – where Dole’s body would lie in repose in the State Capitol the afternoon of Dec. 11 – reached out to Beckley to see what they could provide there.

“I hadn’t even thought about that part of the mission,” Beckley said. “So, I called my other committeeman who lives on that side of the state, Don Harden, and I said, ‘can you take care of this Topeka piece?’ Don and another director in that part of the state got that piece handled.”

The final result was honors for Dole and his family via the Legion Riders from his arrival in Salina to his final service in Topeka.

“I was really pleased with the turnout, because it was so last minute,” Beckley said. “It was right in the middle of the holiday season. We didn’t really know who we could get. And we had some really harsh, colder weather move in over the weekend. But we had people flocking from posts all over.”

Beckley said around 24 chapters took part in the entire effort, some riding as far as south of Wichita. “With the (wind chill) at 10 degrees … those guys had some courage to do what they did,” he said. “But that’s what we do.”

Beckley said Dole – the 1997 recipient of The American Legion Distinguished Service Medal – earned that type of effort. “To us, he was a real-life Kansas hero to our veteran community,” he said. “He had such a strong bond with all the veterans and did so many things. The Honor Flight that flies out of Omaha to D.C., before he got really ill, he was there to greet them when they got there almost every single time. And the (Russell County Veterans Memorial), when they were putting that together … nobody reached out to him or anything. He just sent them a check and paid for the whole thing.

“He was a hero to veterans, and he was just a good old-fashioned country boy. He never forgot where he came from.”