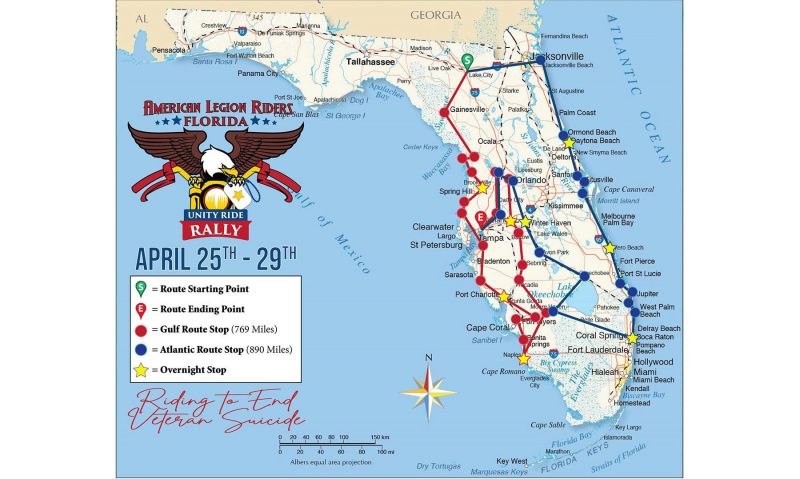 In 2013, the American Legion Department of Florida began staging an in-state ride that for years raised funds for The American Legion Legacy Scholarship Fund. But as awareness rose about veteran suicides, the fundraising effort – the In-State Unity Ride – switched over to the department’s PROJECT: VetRelief Suicide Prevention Initiative.

The coronavirus pandemic forced the event to go virtual in 2020, but Florida’s American Legion Riders and other Legion Family members were able to raise $60,000. And last year, between the actual ride itself and all the associated fundraising that goes on leading up to the ride, that amount was nearly doubled to $115,000.

Fundraising started in April for this year’s effort, which will be capped with the In-State Unity Ride April 25-30 that finishes up at a state rally at the OCC Road House & Museum in Clearwater. Registration for the ride is ongoing.

Florida American Legion Riders State Director Jim Wineland admits he never saw the event get as big as it has. But he knows the reason why it has.

“Was the growth planned? No,” said Wineland, a member of American Legion Post 129 in Jacksonville Beach. “When it started to really take off, we added more things to it. And nobody’s sitting on the lid. The lid’s off, and we’re letting it grow.

“But we were blessed, I guess is the best way to put it. It’s just having the right team of people together, and having individuals and posts that want to get it done. And we have to have fun doing this. And we do. We have a ball.”

Like past Unity Rides, fundraising for this one started at the beginning of April. Legion Family members have the opportunity to set up online fundraisers that others can support, while districts have been pitted against each other through a variety of chapter rides. Riders can stage their own and share them on the Florida American Legion Riders Facebook page to earn points toward the District Round Robin Trophy. Those rides must include stops at three different American Legion posts, which gives the Riders an opportunity to visit posts at which they may not normally stop.

So far, 100-plus riders have signed up to participate in the five-day ride, which has two routes that each depart from Lake City: the 828-mile Gulf Route and the 890-mile Atlantic Route. The Gulf Route makes overnight stops in Brooksville, Port Charlotte, Naples and Lakeland, while the Atlantic Route stops at night in St. Point Orange, Vero Beach, Boca Raton and Winter Haven. The two routes meet up in Tampa April 29.

“It’s just a hoot,” Wineland said of the ride. “To go into these little towns … and have the kids line the street, it, uh, it hits you.”

But it’s also the cause – raising awareness about veteran suicides and working with other agencies throughout the state on prevention efforts – that drive Florida’s Legion Riders.

“We’re all in for the cause,” Wineland said. “All of us have had connections with our comrades committing suicide, or it’s been in our families, or we’ve witnessed it in other ways. It’s out there. And nobody for awhile seemed to understand that.

“When The American Legion was organized after World War I, and they said, ‘We don’t know what to do with all these shell-shocked veterans that are homeless on the street’, that’s why The American Legion was formed: to help those people. This is a continuation from that: over 100 years to make sure we take care of our veterans.”