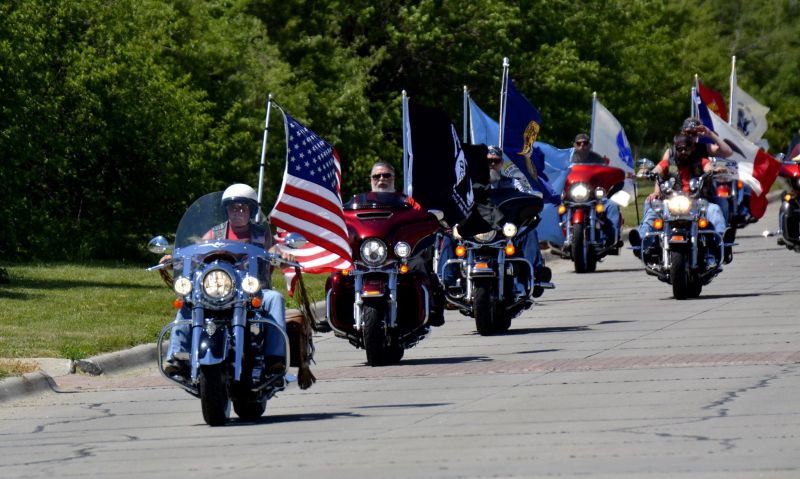 In 2014, a group of Iowa American Legion Riders – led by American Legion Wasmer Post 241 member Larry “Doc” Foster – took what they had experienced participating in Rolling Thunder in the nation’s capital and brought it home. Those Riders set up their own event similar to Rolling Thunder’s “Run for the Wall,” pulling together fellow Legion Riders and others – around 80 motorcycles – and traveling from Sioux City’s Tyson Event Center to Siouxland Freedom Park in South Sioux City, Neb., home to a permanent half-scale Vietnam Memorial Wall.

The Riders’ “Thunder on the Missouri” expanded in 2015 to the five-state area and drew 140 motorcycles, while 2016 and 2017 each saw around 200 bikes, along with additional events added.

In 2018, fellow Post 241 Legion Rider Larry “Grumpy” Haitz began coordinating the event, and a year later the route was changed to depart from Post 662 in Sgt. Bluff, Iowa. More than 300 motorcycles participated, while Post 662 provided food and beverages throughout that Sunday.

Then came 2020 and COVID-19, which cancelled “Thunder on the Missouri.” The event resumed in 2021 with around 150 motorcycles. And immediately after its conclusion, Haitz began preparing for this year’s ride, which again will take place Memorial Day Weekend.

“As soon as one’s done, the next one starts. It makes it easier to take a little bit at a time and move that way, instead of waiting until the last minute and trying to throw it together,” Haitz said. “When I took this over it was just me, and what I wanted to do I knew I couldn’t do alone. So, I formed a committee that consists of about 80 percent Legion Riders (from Chapters 241 and 662 in Iowa, and Chapter 307 in South Sioux City, Neb.).”

Haitz said with the way this year’s event has been publicized, he expects more than 400 motorcycles to participate. He said that when Rolling Thunder staged its last national ride in Washington, D.C., in 2019, it urged local Rolling Thunder chapters to get involved in local rides – such as Thunder on the Missouri.

This year’s Thunder on the Missouri will kick off Friday, May 27, with a Patriot’s Bike Blessing at Siouxland Freedom Park. Later that night a Vietnam Memorial candlelight ceremony will take place, similar to what used to take place during Rolling Thunder at the national Vietnam Veterans Memorial.

The following day, American Legion Riders taking part in the Nebraska Medal of Honor Highway 20 Thunder Run will end their ride at the Siouxland Freedom Park’s Vietnam War Memorial for a ceremony before meeting up with Thunder on the Missouri participants. And on Sunday, all of the Riders will depart Post 662 for the Vietnam War Memorial, where the procession will present its annual “Thunder Salute” as it circles Freedom Park.

The additional activities surrounding “Thunder on the Missouri” are scheduled with a purpose. “We have tried to emulate what they did in Washington, D.C., (during Rolling Thunder) as much as we could,” Haitz said. “At the beginning we couldn’t do everything, so we’re moving that direction.

“The other thing is we’re getting people from further away in the Midwest that are coming here, and lodging here and camping here, and we’re trying to give them more things to do.”

Haitz said all the effort that goes into planning “Thunder on the Missouri” is worth the meaning behind the weekend. “The country was moving away from recognizing veterans and what they did for the country and how they protect our freedoms,” he said. “Our goal was to try to refocus that and make people realize what the veterans have done for them, and the veterans who lost their lives trying to accomplish that, and those who have never been found to bring back home.”