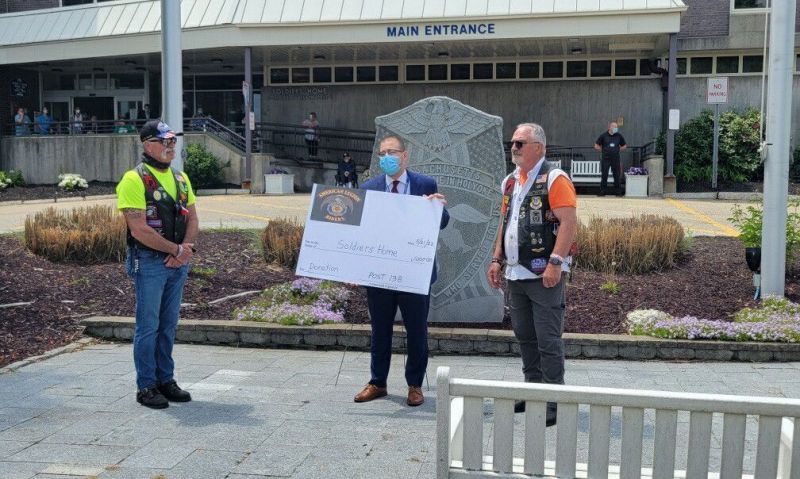 Since getting its charter in 2009, American Legion Riders Chapter 138 in Spencer, Mass., has staged two major rides per year – one in May and the other in August. Each one of those is attached to a name or title, which is meant to represent a cause or honor someone or a group.

The most recent took place on May 22, despite temperatures in the 90s and high humidity. And this time, the title was “Never Forgotten” to honor those lost during the onset of the coronavirus pandemic in nearby Holyoke.

In late March 2020, a COVID-19 outbreak at the Soldiers’ Home in Holyoke led to the deaths of 76 of the veteran residents living there while infecting 80 employees. It was one of the deadliest outbreaks in the nation – and one Chapter 138 is determined to not let anyone forget.

“I think it kind of fit the narrative of ‘never forgotten’,” Chapter 138 Director Dan Meloche said. “It’s important that those who lost their lives through this don’t fade away in our memories down the road.

“We do two major riders every year. We’ve had World War II rides. We’ve had Vietnam rides. A young man from Spencer who was wounded in Iraq and lost part of his leg, we had a ride for him.”

After leaving Post 138 and arriving in Holyoke some 40 miles later, the Riders dismounted outside of the Soldiers’ Home as the residents were brought outside. Marine Corps veteran and Chapter 138 Rider “Red” Burdett gave a short speech. “Everyone had a tear in their eye after he was done,” said Meloche.

After the speech and presenting a $1,000 donation to the home to be used to fund activities for the residents, each of the Riders left a penny on the granite stone in front of the home.

“There’s several different variations, but typically if you go to a cemetery and you see coins on a tombstone, they’re there for a reason,” Meloche said. “The very first level of recognition is a penny, and that means you’re paying respects to that person. We made sure everybody had a penny … to show our respect and to designate that they are not forgotten.”

The Riders then headed to nearby Granby Post 266 for snacks before returning to Post 138 for food, music and raffles. Meloche said the reactions from those the chapter wanted to honor make the effort that goes into planning and carrying out the ride worth it.

“Even though we know these things exist as part of our everyday life – veterans in veterans’ hospitals and so forth – you don’t get a full appreciation for their plight until you see them wheeled out in wheelchairs with blankets on a lot of them,” he said. “Some of them are up in age. And how happy they were to see us. The veterans appreciated it.”