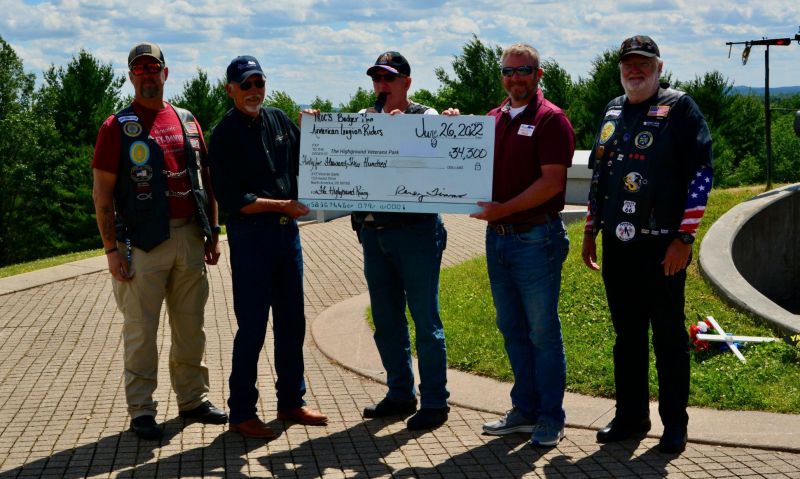 Located in Neillsville, Wis., The Highground Veterans Memorial Park is a 155-acre area that includes a museum, gift shop, hiking trails, picnic areas, and one national and one state veterans tribute among its more than a dozen other tributes. It also offers programs for veterans dealing with post-traumatic stress disorder, homelessness and physical disabilities.

Receiving neither state or federal funding, The Highground is in the midst of a $4 million fundraising campaign to, among other projects, improve access for disabled veterans and construct a new 12,000 square-foot Welcome and Visitor Center, with space for larger events, meetings and programs, as well as mental health services.

Thanks to a group of Wisconsin American Legion Riders, more than $34,000 was recently added to the funding for the project. A three-day, 600-mile ride June 24-26 saw more than 50 motorcycles and an advance team travel from Triple Nickel American Legion Post 555 in Sheboygan to The Highground. The participants in IROC’s Badger Run – named for Department of Wisconsin Commander and Legion Rider Greg Eirich – made stops along the way at American Legion posts while raising funds for the park.

Ride co-chair Randy Timms, director of Wisconsin’s District 1 Legion Riders and a member of Sons of The American Legion Squadron 375 in Mukwonago, said it was a chance meeting with Eirich last year that led to the IROC Badger Ride.

“I told him that I was trying to figure out how to do a statewide Legion Riders run,” Timms said. “Originally, I envisioned that we would end the run at the department convention. We talked about some other possibilities. He said he wanted to do a run, too.”

“Corey and I started planning this in October of last year,” Timms said. “In the beginning we met via telephone conference call every Tuesday afternoon. Once we started to assemble a little bit of a team, the team met via Zoom meetings every other week. We did that probably since early November.”

All that planning led to a ride that surpassed Timms’ expectations. “Corey and I have kind of laughed about this, and Commander Eirich and I have as well,” he said. “In the early, early, early days … we were pretty grandiose about the whole thing. As things started to unfold and the clock continued to tick, we thought if we could raise 30 grand, that would be wonderful. And the longer the clock turned, we changed our tune and said, ‘Well, $20,000 is a lot of money, and that would be wonderful.’

“I think we were just thrilled with the (total raised) and the check we gave them that day. And I think there’s probably another $1,000 coming in through donations that Highground hasn’t gotten yet.”

Timms, who also doubled as the state ALR secretary, said the reason to raise funds for The Highground was that “as Legion Riders, we’ve given to many, many veteran causes over the many years,” he said. “We felt that helping The Highground project get started was a good idea.”