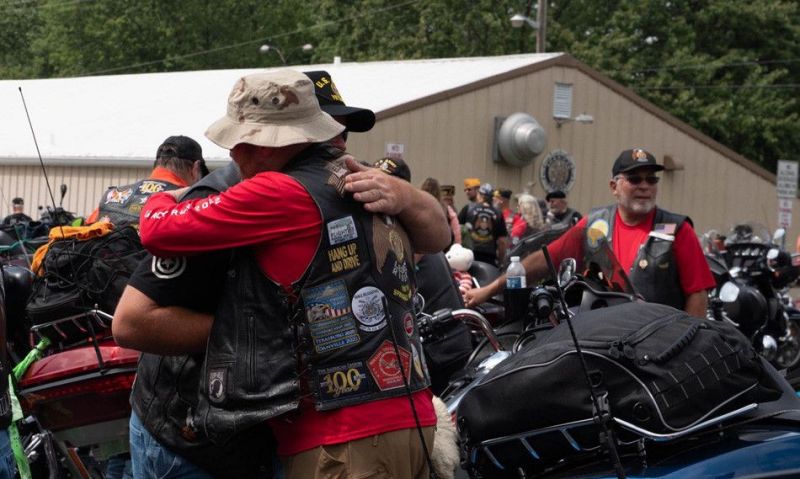 American Legion Riders give each other bittersweet goodbyes as they hug each other. (Photo by Hilary Ott)

With large donations from various state Legacy Runs expected to be presented on Aug. 30 on the floor of the American Legion national convention, the record of $1.3 million raised in one year could be in jeopardy.

But records don’t matter to American Legion National Paul E. Dillard, who rode with this year’s Legacy Run the first few days and then was there to greet them at American Legion Post 434 in Oak Creek. It’s the mission that matters.

“I’ve always been the kind of person that it doesn’t matter who’s got what,” Dillard said. “We’re all in it together. It’s not about me. It’s about The American Legion, and the brothers and sisters we do this for, and the children we do this for.”

Dillard likened the Riders’ dedication to that of a pot of gold. “I’ve heard all my life, especially when you’re a kid, that people chase a pot of gold at the end of a rainbow,” he said. “They don’t have to do that. They just need to meet these Riders and ride along with them three or four days, and they’ll be a pot of gold in their heart. It will be very warming.

“It’s brothers and sisters, like we were in the military. And they’ve just done an outstanding job and had a very safe trip. There’s nothing else we could ask for.”

“We had 70 brand-new Legacy Run riders with us, and when we left Alabama we had more than 320 souls lined up behind me,” Clark said. “We rode into some terrible weather. We were chasing some weather that would make an experienced motorcyclist cringe a little. But they just plowed through, hung in there and stayed focused. They supported each other, and I can’t tell you how proud I am of them.

“It speaks to the character of the folks here who are on this ride. It speaks to the character of the American Legion Riders around the country and around the world, how much they care about this cause. They’ll endure heat, they’ll endure, they’ll endure long days, because at the end of that, they know they’re making a difference and providing a young person an opportunity to live the life of their dreams and achieve their educational goals.”

Woodburn actually participated in the 2019 Legacy Run, riding as a passenger with her father, Department of Indiana Adjutant Chad Woodburn. Being on that ride gave her a greater appreciation for how the money is raised and the effort the Legion Riders put forth to do so.

“I’m entering my senior year now, and I will have very little student loan debt to pay back,” she said. “And that’s because of this scholarship. From a student, a military kid and a fellow Rider, I couldn’t thank you enough for everything you’ve done. From the bottom of my heart, I love you all.”

A Chance Meeting. The ride made a scheduled stop at the Southern Wisconsin Veterans Memorial Cemetery, where a special guest was waiting for them.

Illinois resident Sandra Hess, whose first husband Daniel Graham served in the Vietnam War and is buried in the cemetery, read on Facebook about the Riders’ stop earlier that morning. She wanted to be there to greet the ride and thank them on behalf of her and her son, Army Spec. Kevin Graham, who was killed in action Sept. 26, 2009, by an IED in Kandahar, Afghanistan.

“I can’t tell you how emotional it was seeing you all ride in here,” Hess told the Riders. “It’s just overwhelming. Thank you. What an honor it is for me to be here.”

Mark Clark was visibly emotional after Hess spoke. “I will never forget this moment,” he said. “Of all my Legacy Runs, I will always remember this.”

Clark said that cemeteries such as Southern Wisconsin “mark a holding place for our society. They’re a visible reminder of the sacrifice it takes to defend a free nation. It’s fitting that before we get to our final stop, this group – that works every day to take care of the children of our veterans, our brothers and sisters – should stop to pause to say thanks quietly.”

Consider Them Hooked. In 2019, Alabama Legionnaire Travis Opsal took part in the Legacy Run for the first time. Travis’ wife Leslie said her husband had “great stories” afterward about the ride and encouraged her to participate.

“I’ve been riding for a long time,” Leslie said. “My husband said, ‘I think it will be stressful for you to do it, but you’re really going to enjoy this part of it.’”

“This part,” Leslie said, is the camaraderie on the ride, something she felt when she took part with Travis this year. Both retired from the U.S. Air Force and members of American Legion Post 44 in Gulf Shores, they each rode their motorcycles the entire ride. And Leslie was glad they did, though the final stretch into Post 434 was emotional.

“Oh, I cried,” she said. “When we came around the corner and the advance was standing there saluting us, that was just too much. They done nothing but support us the whole time, and they end standing there doing that. It was overwhelming.”

For Travis, it’s both the people and the mission that has drawn him to the Legacy Run. “Riding for the kids and coming into the communities … is overwhelming,” he said. “And it’s truly like family. To meet people from literally anywhere … and have everyone come together with one common goal, one purpose, it’s amazing.”

Leslie said the pair already has asked Clark when registration will begin for next year’s ride. “Barring crazy life events and what not, I hope to not miss another one,” added Travis.

The pair both referenced Nebraska Legionnaire Rollie Otte, who took part in the past 15 Legacy Runs before saying his goodbye to the ride on Wednesday. “It’s family. That’s really what it comes down to,” Travis said. “And he’s just the salt of the earth. But then, everyone here is. Otherwise, they wouldn’t be doing this sort of thing.”

Still Going Strong. In 2006, Texas Legionnaire Jim Fleming and a group of fellow Legion Riders met the inaugural Legacy Run in Kansas and rode with it the rest of the way to Salt Lake City. And that was all it took.

“We rode all the way (to Salt Lake City), and I talked to them and said, ‘I’m doing this again,’” Fleming said.

And he did, again and again and again. And every year since then, Fleming has taken part in the Legacy Run. The one year there was no full-length run – in 2020, due to COVID-19 – he still took part in a segment of the Pony Express fundraising ride.

Fleming, a member of American Legion Post 194 in Annam, Texas, is thrilled to have seen the Legacy Run grow, from 62 in its first effort to more than 200 motorcycles at times during this year’s ride. “It’s fantastic,” he said. “It’s growing like wildfire.”

Fleming said the Legacy Run has become “like a calling. It’s just something I’ve done. And everyone in Texas knows I’m the Legacy kid.”

Fleming is 82 and last year recovered from colon cancer just four months before the Legacy Run. But that didn’t stop him from taking part in the ride from Arkansas to Phoenix. “It all depends on my health,” he said. “Last year I probably came back too soon. But as long as my health holds up, I’m going to keep coming back.”

A Legion Rider Becomes a Legionnaire. David Heredia currently serves as a vice commander for the American Legion Department of Maryland. He’s also served as a post commander and continues to immerse in the organization.

But Heredia freely admits that it was being a part of the Legion that drew him to join the organization: the American Legion Riders.

“When I joined The American Legion, I joined as a Legion Rider, a member of Bernard C. Tobin Post 128 and the assistant chief road captain for this year’s Legacy Run. I didn’t know anything about what the Legion did. After (National) Legion College (in 2016), it expanded my knowledge about this great organization. Legion College helped me to be a Legionnaire. Being a Legionnaire allows me to be a Legion Rider and understand what the Sons and the Auxiliary do.”

Heredia previously served as the ride’s chief tail gunner in 2017, then had to miss the 2018 and 2019 rides. Last year he was tail gunner for Flight K but got the call from Clark about moving up to the No. 2 spot in the ride when longtime Assistant Chief Road Captain Jim Cowley became ill and later passed away.

“When Jim was ill, I called and spoke to him. I’ve always told Jim, ‘The job is yours when you’re ready,’” Clark said. “And I told him, ‘Listen, if you can’t come … I intend to ask David Heredia to be my assistant chief road captain on this Run. Without hesitation, Jim said, ‘You picked a good one there, bud.’ And you better believe we did.”

Going from tail gunner to the front of the pack brought some different perspective for Heredia – and an appreciation for the magnitude of the ride. “Being up front, I get to see more of the scenery,” he said. “In the back I’m not focused on the scenery. I’m focused on everybody else. It’s given me a perspective to see how beautiful the country is from the start to where we are here today. And I get to look in the mirror and see that beautiful line of bikes behind us. It’s quite a perspective.”