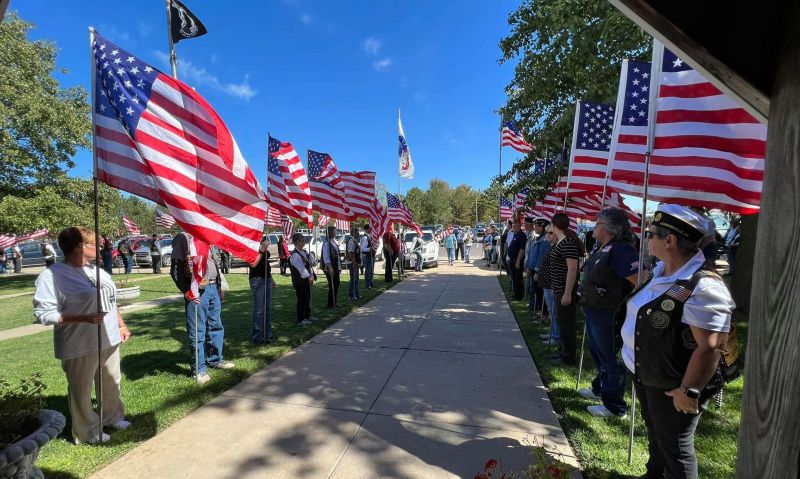 While on his way to his 16th American Legion Legacy Run in August, longtime Kansas Legion Rider Dave Schoonover was involved in an accident. He succumbed to his injuries later that day.

Five and a half weeks later, hundreds of fellow American Legion Riders from all over the nation came to Hutchinson, Kan., to honor Schoonover and show their support for his wife Millie.

Schoonover, a member of Lysel Rishel Post 68 in Hutchinson and a longtime presence on the National American Legion Riders Advisory Committee, was remembered during a celebration of life that included a memorial ride and flag line. Riders from as far away as Virginia, Georgia and New York were among those in attendance.

“It was amazing,” Millie said. “Dave didn’t want to have anything like this, because he was afraid nobody would come. Originally, I wanted it to just be friends and family and stuff like that. But (Department of Kansas Commander Jeremy Ehart) was telling me that he was getting calls from other states … and I told him, ‘You guys run with it. Open it up to anybody who wants to come is more than welcome.’

“So it went from nothing to something incredible.”

George Guthrie, a South Carolina Legion Rider and Georgia resident, made the 34-hour round-trip trek with his wife and fellow Rider Cindy to take part in the celebration of life.

“He’s been a good friend to many people,” Guthrie said. “It’s hard to describe. He’s my good friend. We’ve become family. Everyone that was (at the celebration of life), it’s like your family.”

Guthrie also said he wanted to be in Kansas to support Millie. “She wasn’t involved in what (the Riders) were doing directly, but she supported Dave to be able to do what he did. She’s basically extended family.”

Millie said Dave – a U.S. Army veteran and Patriot Guard Rider – was passionate about the POW-MIA issue, getting updated numbers to share those with fellow Riders. When the traveling Vietnam Veterans Memorial came to Kansas, Dave and Millie put together a list of POWs/MIAs, along with short stories about each, and shared them at the memorial.

“I took one full drawer of information out of his desk and gave it to the Riders strictly for the POWs/MIAs,” Millie said. “That was one thing he was adamant about. I don’t know what got him started on it. Once he did, he was like a bulldog. He didn’t turn lose.”

Millie used to ride on the back of Dave’s motorcycle because back issues for her put a stop to that. But she continued to be involved with her husband’s Riders work in other capacities.

“He’d say, ‘I need you to find this for me.’ Somehow, I always managed to get involved in all his stuff. I couldn’t get out to do stuff with him, so it was always, ‘Honey, I need your help doing this.’”

Schoonover had participated in every Legacy Run, the road captain for Flight D, though he was limited to just riding through his own state on one of those. “He’d broken his tailbone, and he’d done it like two days before the ride,” Millie said. “So he just went across Kansas. He came home and he was in tears because he was hurting so bad. But he said, ‘I made it across Kansas!’”

Guthrie said as a flight captain on the Legacy Run, it’s his job to make sure everyone in the flight feels safe. That was something Dave excelled at while on the ride.

“And he had a lot of good ideas going on that was he was implementing up there in Kansas. We’ve lost a good one.”