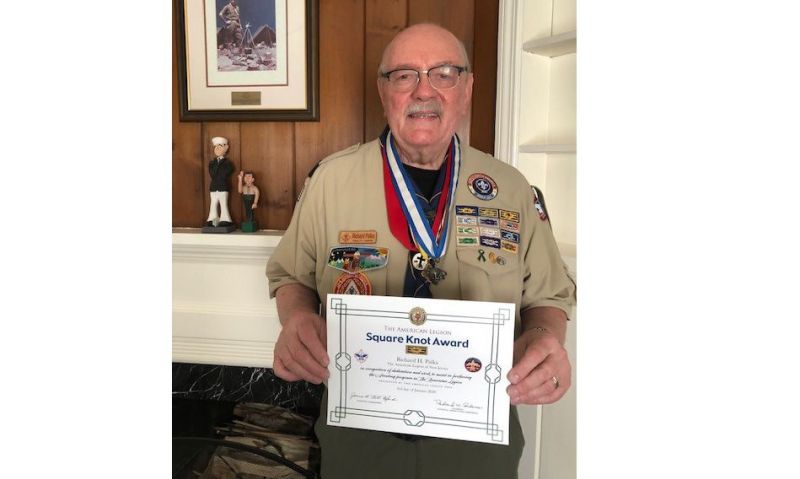 Richard Palka’s wife told him not to make plans for Friday evening – he had a Tiger Cub Scouts meeting with his two sons, Andrew and Paul Michael.

That was 32 years ago. And ever since, Palka’s been involved with the Scouting program of Troop 71 in Leonia, N.J., even after the loss of Paul Michael at the age of 16.

Palka is one of 12 American Legion, Sons of The American Legion or Auxiliary members to earn The American Legion Scouting Square Knot Award in 2019. The award was established during the 2003 Springs Meetings of the National Executive Committee following the passage of Resolution No. 34, “to provide recognition to those individuals who have made a significant contribution to the youth of their communities through the programs of the Boys Scouts of America.”

The criteria to earn The American Legion Scouting Square Knot Award features several requirements to be met under service, training, tenure and performance. Palka’s opportunity to apply for and earn the award came about five years ago when American Legion Post 1 became the sponsor of Troop 71 after its previous charter of 50 years, a Lutheran church, closed its doors. As the assistant Scoutmaster for Troop 71 and the Cubmaster for the newly formed Cub Scout pack, Palka said, “My mentor (Post 1 member Dr. Carl Springoff) started knocking on my door again … ‘Now is the time you can get your (American Legion) Square Knot,’ so I started looking at the requirements.” He had to fulfill a few additional requirements with training and activities.

With report in hand that featured page after page of awards, training, etc., Palka gave it to Post 1’s senior vice commander to sign off on it before it went to the Department of New Jersey for additional signatures. Palka said the senior vice commander said a swear word when the report was put in his hands because he was so in shock of its large size. “The requirements are extensive,” Palka said.

“I’m honored that I earned it,” Palka said. “When you get it from something you really worked hard for and it’s presented by someone you know and admire, it makes it so much more special.”

Palka credits his mentor for helping him achieve the 16 Square Knot awards and for being a reason he’s still in the program to ensure its ongoing success.

“You have to nurture Scouting. You have to make sure there are people that are going to continue the program,” he said. “I have mentored nine Eagle Scouts under my wing. I consider that a big accomplishment for our small troop.”

Palka could have left the Scouting program nearly 20 years ago after the loss of his son, who was involved with Scouting for about 13 years and “really enjoyed Scouting. Paul Michael was a great instructor, he was interested in helping the kids, especially the younger ones as they came into the troop.”

American Legion posts sponsor more than 2,500 Scouting units across the country. This is natural for Legionnaires, who bring their service-learned skills and experiences as veterans to help build character and positive traits in our country's youth.