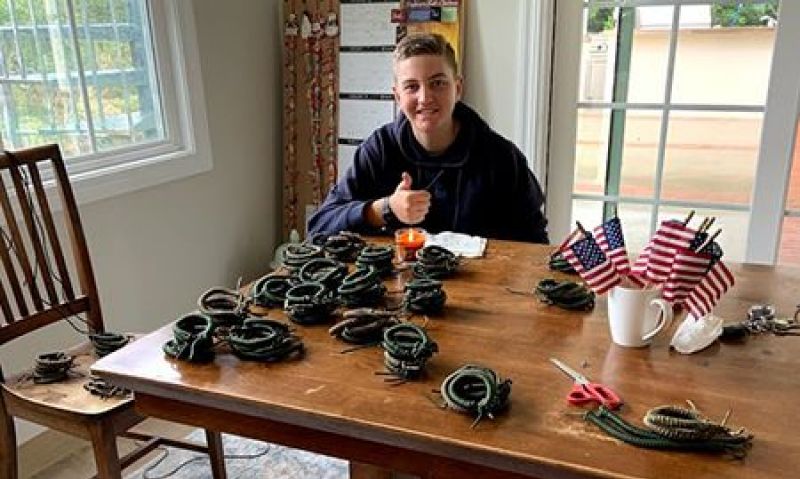 McPhie was nominated for the award by the Department of California and is a 15-year-old freshman at University High School. He has been active in Scouting since 2013, and earned his Eagle Scout rank in June 2019.

For his Eagle Scout project, John wanted to “help other students better understand and appreciate our armed forces,” he wrote in the Eagle Scout of the Year application. “A ton of good comes from noticing things to be grateful for and taking time to express that gratitude and thankfulness. So I brainstormed projects that would help strengthen the connection between civilians and the military.”

The result was emergency paracord bracelets.

John visited elementary schools, middle schools, Boy Scout troops and community organizations to help him assemble the emergency paracord bracelets, write letters of appreciation, and listen to his presentation on what the U.S. military does at home and around the world.  He provided all the materials needed to create the bracelets, including the paracord that he pre-cut and singed.

The emergency paracord bracelets can be “deployed” in 30 seconds, releasing 7.5-feet of paracord that can be used to secure camouflaged nets to trees or vehicles, build a makeshift shelter, create a harness to extract an injured person, make a sling or splint, and more. The beneficiary for the bracelets was Operation Gratitude; they include the bracelets in the care packages sent to deployed servicemembers, first responders, new military recruits and veterans.

“I was grateful that I could give other students the opportunity to reflect on what we owe to our deployed troops who put themselves in harms way,” John wrote. “We all recognized that the few hours we spent together writing letters of appreciation and assembling emergency paracord bracelets for care packages does not begin to compare in any way with the service that our American heroes give to our country each and every day.

“My Eagle Scout project showed me that many people really appreciate the opportunity to say thank you to the men and women of the military.”