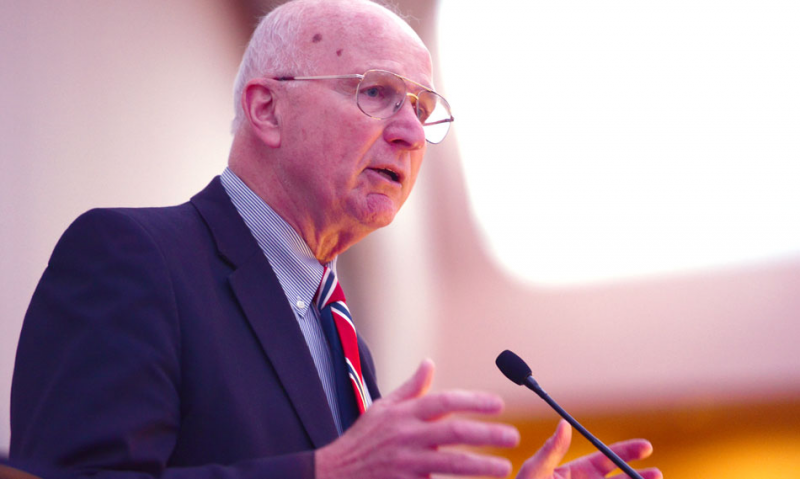 The American Legion National Security Commission held a meeting on Feb. 26 to discuss defense budgeting, cybersecurity issues and TRICARE changes. The meeting was held at the Washington Hilton Hotel in conjunction with The American Legion’s annual Washington Conference in Washington, D.C.

According to Lawrence Korb, a senior fellow at the Center for American Progress, the proposed defense budget for 2019 is $716 billion. Korb said the first thing to keep in mind when it comes to the budget is that one cannot buy perfect security.

“No matter how much you spend on defense, you’re always going to have to make choices about where you spend the money,” said Korb. “The good news is yeah, you can do more things. The bad news is how are you going to pay for it and, is it because you have so much money, are you not going to do the things that are so important for the American people?”

Korb said interest on the national debt is going to be 30 percent more than the defense budget, making debt the greatest threat to the U. S. national security.

Because the world isn’t as stable as it should be, Korb said it’s important to make national security a win-win system for everybody.

“I looked at a Gallup poll and (it reported that) a majority of Americans do not support spending this much money on defense,” he said. “National security is not just defense. If you don’t have diplomats and people out there working on these things, you’re going to endanger security.”

When it comes to current threats around cybersecurity, Tim Maurer, co-director of Cyber Policy Initiative at the Carnegie Endowment for International Peace, said this issue has gone from a debatable topic to a regular discussion on the national agenda.

According to Maurer, the most recent development was over a week ago where the White House, along with a series of other governments, publicly blamed Russia for last year’s NotPetya cyberattack. Maurer said the malware was distributed to various businesses around the world, locking up computers so that they couldn’t be used again.

“It significantly disrupted their business operation so that each company suffered more than $300 million in costs. The overall costs of the single cyberattack was estimated to be about $1 billion,” said Maurer. “The fact that the government felt confident enough that the Russian government was behind this is significant because we haven’t seen it before.”

Maurer said another instance where U.S. officials publicly accused another country was back in December 2014, after the cyberattack against Sony Pictures, which cost more than $1 billion over the span of a few weeks.

“There had been a lot of news about this comedy (movie) that was making fun of the North Korean leader. North Korea had threatened that it would attack the United States if this movie would be released in American movie theaters,” Maurer said. “The North Korean threat was actually successful enough for the movie theaters to pull the movie. (Sony officials were worried that they) would be legally held liable for any sort of incident.”

Maurer also spoke about the 3 billion Yahoo email accounts that were hacked in 2013, which is still the single largest data breach in U.S. history to date.

“These four individuals managed to hack all of the three billion email accounts that Yahoo managed. Not only did they manage to gain access to confidential information, but Yahoo was also in negotiations to be taken over by Verizon,” Maurer said. “Once the news about this data breach hit the news, the deal had to be renegotiated and was renegotiated down by $300 million.”

When it comes to trends, Maurer said more than 30 countries are now developing defensive cyberwar capabilities. This is a huge increase since 2011, in which only a few countries were considered to be cyberwar superpowers including the United States, Russia, China, Israel, the United Kingdom, France, Iran and North Korea.

“It’s less about geography and more about the effects that you can cause through hacking,” Maurer said. “Because hackers can operate from their own country and in their own homes, the tools that we have available to actually mitigate against these threats are fairly limited.”

The overall effect of these indictments, according to Maurer, have been mixed. Other than the indictments, Maurer said there’s little to nothing else that U.S. officials can do.

“We’re not going to send a rocket in response to a hack,” he said. “We have challenges in terms of what to do, which raises the question as to how we will deal with the future risks.

“Hackers are no longer only costing money, but might be costing lives down the road because they are growing increasingly daring. This is something that I think we have to watch.”

According to Health.mil, the Military Health System is modernizing to better serve beneficiaries and respond to changes in law and policy. In terms of changes, TRICARE Select replaced TRICARE Standard and Extra; new enrollment rules began; there are new stateside regions and regional contractors; new costs for some plans; improved access to urgent care; improved access to preventive services for TRICARE Select beneficiaries; and the TRICARE Philippine Demonstration ended.

Most provisions went into effect Jan. 1, with full implementation beginning Jan. 1, 2019. Other changes include provisions to pharmacy copayments which began Feb. 1, the TRICARE Retiree Dental Program will end on Dec. 31, and eligible beneficiaries can start enrolling in the Federal Dental and Vision Program as of Jan. 1, 2019.

“There’s really no change for the active duty population,” Canestrini said. “In three years, the (Department of Defense) DoD will do an assessment to see how well we did at putting out a network that afforded 85 percent of our TRICARE beneficiaries the opportunity to use network care.”