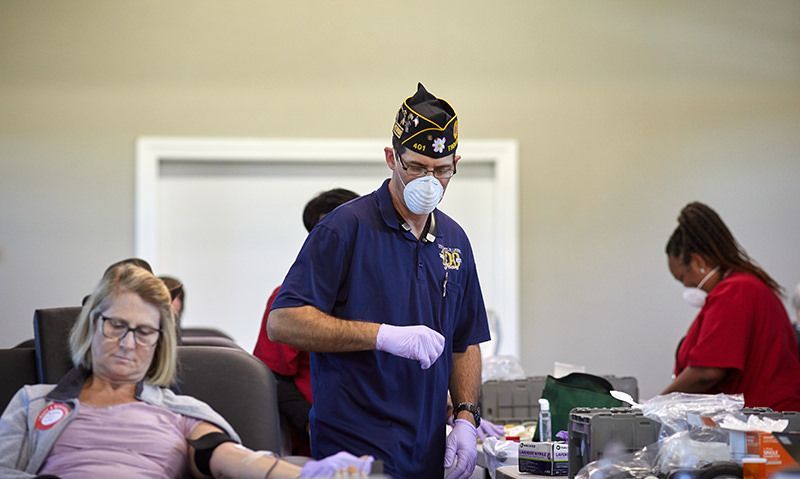 By all accounts, the first blood drive coordinated by American Legion Post 401 in Troutman, N.C., was “amazingly successful.”

Before the April 4 event, all 36 donor slots were filled. Overall, 38 donors contributed 34 units of blood during a time when the American Red Cross has determined “an urgent need for blood donations” amid the coronavirus pandemic.

Lee McDaniel, Post 401’s sergeant at arms, served as coordinator for the blood drive. He had planned the event before COVID-19 had entered the United States. But as the virus spread, the urgency grew.

“Even though it is not something I can donate to, this is the mission that I had,” said McDaniel, who is unable to donate himself because he was in England in the 1980s during Mad Cow Disease. “Just being able to organize it and bring people together who are able to donate to complete the mission was very rewarding and satisfying to me. The Red Cross staffers who were there were amazed at how well our first blood drive went.”

The American Legion has supported such Red Cross efforts for decades. In 1942, The American Legion launched its Blood Donor program that encourages individual blood donations and post blood drives. American Legion National Commander Bill Oxford, who donated eight gallons of blood in his lifetime, delivered that message in a video released last week.

“Please consider a blood donation to support these efforts,” said Oxford, from his home in North Carolina. “Additionally, I would encourage American Legion posts to consider working with your local Red Cross to promote — or even host — a blood drive.”

Amid the coronavirus, the Red Cross has instituted new safety procedures to ensure the safety of donors, volunteers and the blood being donated. Among the new protocols is checking for fevers of all potential donors before they enter the facility. In Troutman, no one failed the temperature checkpoint.

He explained that a donor would first walk to the front entrance where a volunteer performed the temperature check. Once the donor passed, they would walk into the post’s foyer area, which served as a waiting room for up to two people at a time. From there, donors would proceed to the main hall one at a time to the check-in area, then wait until they were called to the opposite end of the hall to complete a form about their health history. One at a time, donors would then be led to where they would give blood.

The approximately dozen or so volunteers — American Legion members, Red Cross volunteers and civilians — all wore face masks and gloves throughout the 5 ½-hour drive. Additionally, the Red Cross follows traditional safety procedures such as changing gloves frequently, disinfecting donor-touched areas and sterilizing tools before each donation.

Efforts by American Legion posts, members and others has been appreciated by the Red Cross.

“A sufficient and safe blood supply is a community responsibility to help ensure we have blood products available for patients in need,” American Red Cross National Partnerships Director Donna M. Morrissey said. “The American Red Cross thanks The American Legion from the bottom of our hearts for the ongoing support. We applaud your courage and strength to give blood during this worldwide health crisis.”