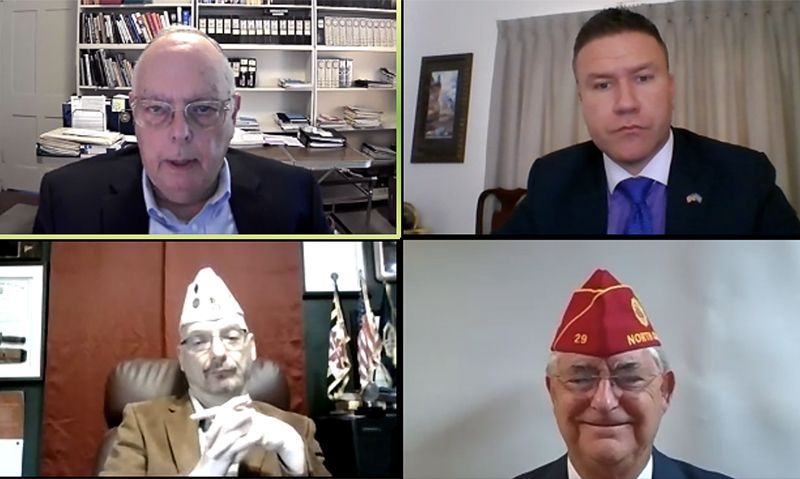 While the components of foreign policy include trade, economics and national security, the coronavirus pandemic has brought another component critical to developing and maintaining policy into the limelight: health, defined by experts as health security – a developing but critical part of global relations.

A panel discussion with representatives of the Defense Security Cooperation Agency/Defense Institute for Medical Operations (DIMO) and the U.S. Agency for International Development (USAID) discussed the need for health security, especially during the coronavirus pandemic. DIMO utilizes subject matter experts throughout the Department of Defense to develop curriculum and teach courses around the world, promoting and implementing global health initiatives. USAID leads international development and humanitarian efforts to save lives, reduce poverty, strengthen democratic governance and help people progress beyond assistance.

Luttrell, an active-duty Navy veteran now in the reserves and approaching 20 years of military service, said that global health security “has never been more critical to the well-being of the United States and its citizens, really, than it is right now. As evidenced by COVID, infectious disease does spread more quickly than ever before.”

And with that has grown the need for dealing with health at the global level. “As health also becomes, really, an ever more critical element in foreign policies, security, policy development strategies in trade agreements, new and complementary skills are really needed to negotiate for health in the face of other interests,” Luttrell said. “An increasing number of health challenges really can no longer be resolved at the technical level only. It really does require political negotiation and solutions that really involves a wide range of actors.”

Dr. Dorothy Narvaez-Woods – Chief of Staff for USAID’s Bureau for Global Health, a former U.S. Navy dentist and a Gold Star wife – said the United States is playing the leading global response role to COVID-19 and that within that “USAID is playing a very key role. The USAID has actually pledged more than $1.3 billion across various funding streams to help fight this pandemic. We work closely with the State Department, the (Centers for Disease Control and Prevention), the DoD as part of sort of an all-America response to support health systems, humanitarian assistance, economic, security and stabilization efforts worldwide.

“But across the globe, we provide meaningful assistance by working directly with governments, ministries of health, international organizations, (non-governmental organizations) and private sector. We’re responding on the ground with these groups, working with frontline workers to slow the spread, care for the affected and to really equip local communities with the tools that are needed to fight the pandemic.”

Narvaez-Woods said USAID is working closely with the National Security Council and other U.S interagency partners through DoD and the private sector to fulfill President Trump’s commitment to provide ventilators to countries in need.

“We shouldn’t forget that there are also second-order impacts of the pandemic on health assistance,” Narvaez-Woods said. “We want to make sure we are continuing to maintain vaccination programs, child health, malaria diagnosis and treatment, as well as the other sort of core, essential health-care services and programs.”

Panel moderator Sean Sorbie, Director of Veterans Outreach for the U.S. Global Leadership Coalition (USGLC), said the pandemic has demonstrated that “these diseases know no borders. The global community really wasn’t ready to combat these infectious disease threats. According to the CDC, 70 percent of the world remains unprepared to respond to a pandemic. Increased diplomacy in the area of global health is really critical.”

The forum’s viewers also heard from former U.S. Ambassador Robert M. Beecroft, whose foreign service included serving as U.S. ambassador in Bosnia, as well as postings in Sarajevo, Brussels, Belgium, Paris, Amman and other stops. Beecroft retired from the U.S. Foreign Service in 2006 as a Career Minister-Counselor before returning for a stint at the U.S. State Department from 2009 to 2016 as a Supervisory Senior Inspector, leading inspections of U.S. diplomatic operations in Kuwait, Syria, Taiwan, Vietnam, Ukraine, Belarus, Lithuania, and four bureaus at department headquarters. He also served in the U.S. Army Reserve from 1965 to 1970 as a medical corpsman and Civil Affairs officer.

U.S. diplomats are tasked with being able to think on the fly and look at a wide range of possibilities. “Diplomats appreciate nuance. Instead of an automatic ‘can do’, we’re trained to ask “what are our options and how can we exploit them in the U.S. interest?’” Beecroft said. “To some, asking probing questions at times of crisis and confusion may seem like a weakness. Diplomats see it as a strength. It’s sometimes necessary to talk to adversaries, not only friends.”

Beecroft said an ever-changing world has altered the way diplomacy is conducted. “Traditional niceties, such as delivering formal diplomatic notes to host government foreign ministries have been largely replaced by emails and tweets,” he said.

American remains the world’s “800-pound gorilla,” Beecroft said, “and if gorillas could talk, even they might tell you that not all threats can be resolved with brute force. At the National War College, a commonly used teaching tool is called the DIME. The term refers to the four key levers of state power: diplomacy, intelligence, military power and economic strength. Our diplomats are the American presence on the ground many times before anyone else gets there, and we tend to remain behind after everyone else leaves. We pride ourselves on knowing the people, the territory, the issues and the language of the host country. We are, in a word, your tripwire.”

“As you ponder today’s headlines, I hope you’ll remember the DIME: A nation’s strength measured in diplomacy, intelligence, military capability and economic strength. In dealing with Syria or South Sudan or North Korea or Russia or the EU or whoever, what lever or levers of power, if any, should our leaders pull? It’s questions like that that foreign service officers grapple with every day."

Dr. Alton Frye, presidential senior fellow emeritus at the Council on Foreign Relations, an independent, nonpartisan member organization, think tank and publisher, said the United States is best served in advancing its own interests by “understanding and taking account of the interests of other (countries). Not by always agreeing with them. We do not expect identical interests or common interests in every case. But the first task that I find before us … is to define a compatible interest among (nations). The objective is not to defer to the interests of others, but to identify those interests that we can accommodate, rather than to assume that we have to be incompatible.”

Frye said the coronavirus has served to divert attention to what he called “the most protracted, long-term threats that we face. There’s a familiar list: China becoming a global strategic power. Russia. (North) Korea. Iran. Others fall into lower categories.”

Frye said the over-arching danger remains the “nuclear menace.” Great clarity, he said, is needed in the essential goals of managing the nuclear danger. “Mutual assured destruction … is not a rationale policy,” he said. “It is a caricature. It is a technological condition that if nuclear warfare breaks out, the destruction will be on historic scale.”