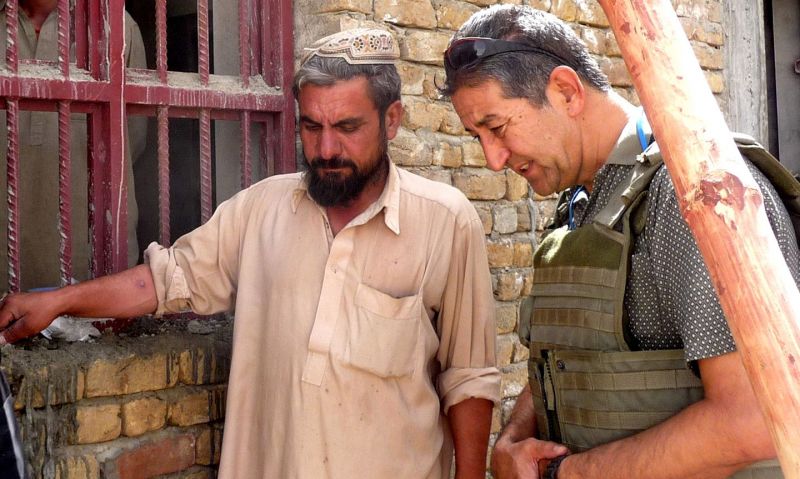 Atiqualla Rahin and an Afghan contractor walk around the grounds of a new building site for a men's detention facility in Lashkar Gah.

“We welcome an end to ‘forever wars,’ but withdrawal must be conducted in an orderly and honorable manner. This falls short on both counts. Abandonment of those who assisted us is literally an issue of life or death,” Oxford said. “Any veteran who has worked with Afghan interpreters will tell you how valuable these brave heroes were to our mission there. It is precisely because of their dedication to our cause that they are primary targets for barbaric retribution by Taliban terrorists. Their families are also targets. They have already undergone extensive security screening and further processing can occur in Guam or other region safely out of harm’s way. It is a moral imperative that we offer them immediate and safe passage away from the enemy and to the United States. If we abandon such friends, how could we expect any assistance by potential allies in future missions?

“The president said today that his administration approved 2,500 Special Immigrant Visas (SIVs) for Afghan nationals since January 20,” Oxford said. “Yet estimates of the backlog run as high as 18,000. If you include close family members, the administration should be prepared to quickly evacuate as many as 70,000. We saved many more lives when we left Vietnam, and even that wasn’t enough when you consider how many were left behind and slaughtered after our departure. A great nation such as the United States does not abandon its friends.”

Oxford also lamented that time is running out, in spite of the letters that he sent to President Biden and Secretary of State Antony Blinken in April which raised alarms about the dangers faced.

“The American Legion passed a national resolution in 2018 asking the president and Congress to prioritize SIVs for our Afghan and Iraqi allies,” Oxford said. “This is not a new or recent issue. The American Legion is calling on the White House to immediately institute a better plan and evacuate our friends now. Delay means death for many of these brave people.”