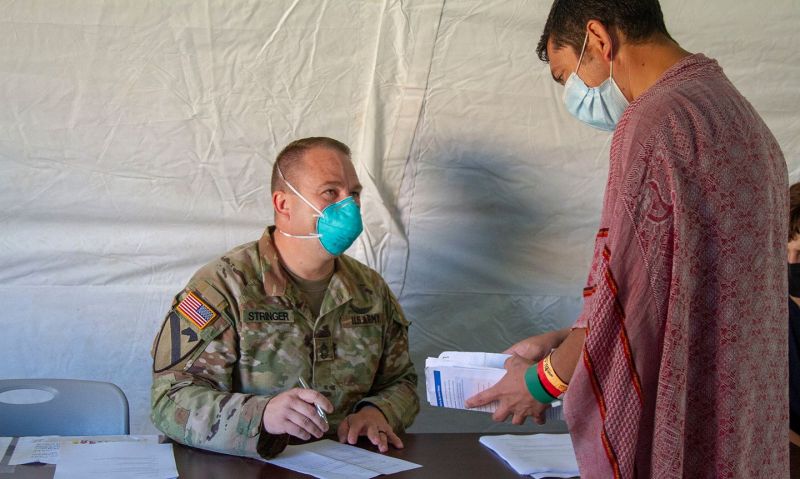 Tens of thousands of interpreters and their families remain trapped in Afghanistan as evacuations dwindle, the U.S. immigration system becomes overwhelmed and Afghans who worked with the U.S. military are unable to obtain visas or other documents that give them a chance of reaching safety.

Large numbers of people also are fleeing Afghanistan, creating a massive refugee crisis in neighboring countries, says Margaret Stock, a leading immigration attorney and retired Army officer. Many will be deported back to Afghanistan, where they are at great risk of being executed by the Taliban.

“People’s lives are at stake because they worked for the U.S. government,” says Stock, who is a member of American Legion Jack Henry Post 1 in Anchorage, Alaska. “Their whole family is in danger. We have a moral obligation to get them out of there.”

The situation will almost certainly get worse as winter curtails use out of the Kabul airport for evacuation flights and famine and Taliban retribution intensify. Veterans, refugee advocates and immigration attorneys are calling on the Biden administration to take swift, decisive action.

“If there’s one thing that needs to happen, it’s for the administration to commit to getting U.S. allies out of Afghanistan,” says Sunil Varghese, policy director of the International Refugee Assistance Project (IRAP).

“The White House needs to take ownership, admit that we left a bunch of people behind, and say we’re going to get them out,” Stock adds.

For years, The American Legion has called on Congress to ensure Afghan and Iraqi interpreters can safely come to the United States. “Our wartime allies saved countless American lives and directly contributed to every level of tactical, operational and strategic success during the mission in Iraq and Afghanistan,” states Resolution No. 16, passed by Legion’s National Executive Committee in October 2018.

The crisis is partially rooted in the long troubled Special Immigrant Visa (SIV) program created more than a decade ago to give Afghan and Iraqi interpreters who worked with the U.S. military a more direct way to immigrate to the United States.

DoD also didn’t follow some well-established procedures for noncombat evacuations, including working with other U.S. government agencies to compile a comprehensive list of everyone who needed to be evacuated, Stock says. As a result, the U.S. military tried to create lists on the fly and more than half the people who should have been evacuated were left behind.

“We taught classes on how to evacuate people from countries when I was an instructor at the Combined Armed Services and Staff School and Command and General Staff College,” Stock says. “We used to do this in exercises. That institutional knowledge went to waste.”

The Pentagon says the State Department has responsibility for compiling the master list of evacuees. And overall, the agency says the criticism is unwarranted given the sudden collapse of the Afghan government and military and the resulting security problems in Kabul.

“Despite these unprecedented challenges, U.S. forces, alongside our allies and partners, were able to evacuate more than 124,000 at-risk personnel aboard 778 airlifts at an average rate of one departure every 45 minutes – all with zero cancellations due to maintenance, fuel or logistics issues,” says Maj. Rob Lodewick, a DoD spokesman. “This is truly historic. While far from the ‘perfect’ Noncombatant Evacuation Operation scenario taught at school houses, executing the largest airlift in U.S. history over the course of just 17 days does not happen without the development, refinement, and execution of the very ‘well-established procedures’ and operational plans that (Stock) is asserting we did not follow.”

The massive August operation aside, IRAP, the Association of Wartime Allies and other organizations say they repeatedly asked the Biden administration to begin evacuating interpreters and other Afghans who worked with the U.S. government before the president’s spring announcement that U.S. troops would fully withdraw by September. “They were warned over and over and over again that they could not ‘process’ their way out of the SIV backlog,” says Kim Staffieri, founder of the Association of Wartime Allies, which helps Afghanis navigate the visa process.

More than 60,000 Afghan interpreters and other visa applicants remain in Afghanistan, according to State Department estimates reported in The Wall Street Journal in December. IRAP says it’s not clear that number is accurate. “I’m not sure anybody except the Biden administration has a reliable estimate, and they’re not sharing,” says Adam Bates, an IRAP attorney.

In addition, many interpreters didn’t apply for an SIV until U.S. forces left Afghanistan. “Most people I’m helping are in the preliminary process,” Stock says. At the same time, the U.S. Citizenship and Immigration Service (USCIS) is denying scores of humanitarian parole applications, a status that would allow Afghan SIV applicants and their families to come to the United States for two years while they work on securing permanent residency. “Somebody flipped a switch after the (August) evacuations stopped, basically telling people in Afghanistan, ‘We don’t care about you anymore, You need to stay in place and die,’” Stock says.

USCIS says it typically receives fewer than 2,000 humanitarian parole applications a year from all nationalities and approves between 500 and 700 of those requests. Since July 1, however, USCIS has received more than 35,000 humanitarian parole requests from Afghan nationals alone. As of late December, the agency had denied approximately 470 of those requests and conditionally approved humanitarian parole for more than 140 Afghanis who are living outside the United States. In addition, the Department of Homeland Security has dramatically increased the number of officers working on parole cases by approximately five-fold to assist with the surge in requests and improve processing times, a USCIS spokesperson says.

Meanwhile, Afghan SIV and humanitarian parole applicants who fled to Pakistan, Turkey and other countries are at grave risk of being deported back to Afghanistan as they deal with bureaucratic squabbles between the State Department and USCIS, Stock says. She helped 17 members of an Afghan medical student’s family obtain humanitarian parole late last summer. But they were not able to reach Kabul to pick up the documents necessary to board a flight to the United States before the embassy closed.

USCIS finally reaffirmed the it had granted humanitarian parole to the 17 family members and they went to the U.S. Consulate in Islamabad to get their boarding documents. But the State Department sent the family back their passports in early February without the flight boarding documents and is denying their request to seek refuge in the United States, Stock says. “This is truly awful.”

Ramish Darwishi, a former interpreter who came the United States in late 2020 after a long battle to obtain an SIV, cannot even find someone to discuss options for helping his family get out of Afghanistan. “I’ve called so many places. No one is answering. No one cares,” says Darwishi, who worked with the U.S. military in Afghanistan for eight years. “I'm thinking, every second, that Taliban will kill my family.”

Stock isn’t surprised that Darwishi is getting stonewalled. “It’s difficult to call anyone to help because the White House has decided they are not going to let anybody come here anymore,” she says.

The situation is heart-wrenching for former servicemembers who served in Afghanistan she adds. And in many ways it’s a replay of what happened after the U.S. military left Vietnam – with one key difference. Congress passed legislation in 1975 that allowed an estimated 1.7 million Vietnamese refugees to come to the United States over 12 years. “And the folks who we brought here after the Vietnam War ended up being very successful,” Stock says.