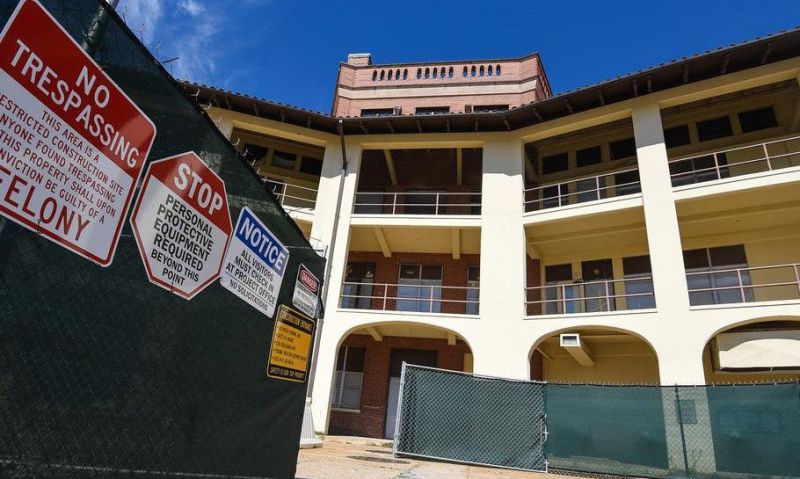 Army Secretary Christine Wormuth said she promises big boosts in barracks spending in the coming years, saying she fears soldiers across the service are living in substandard quarters.

The Army’s top civilian on Tuesday made her first trip to Fort Benning, Ga., and said she did not yet know how large a funding increase would be needed to the service’s roughly $1 billion annual budget for barracks upkeep and renovations. What is clear, Wormuth noted, is more must be done considering the situation at Fort Bragg, N.C., where post leaders last month ordered hundreds of soldiers to relocate from barracks buildings — known as Smoke Bomb Hill — where troops were living with relentless mold and an outdated, often nonworking heating and air conditioning system.

“Our goal is to try to get to a point where we don't have any more Smoke Bomb Hill barracks — where we don't have a situation where there are barracks that we didn't realize were as bad as they were,” Wormuth said after touring near-century-old barracks now undergoing renovations at Fort Benning. “I think with an inventory of barracks as large and as old, in some cases, [as the Army has] I couldn't look you in the eye and say, ‘No, there’s nothing else like [Smoke Bomb Hill] out there.’ ”

Wormuth and Sgt. Maj. of the Army Michael Grinston, the service’s top enlisted soldier, toured Fort Benning’s historic Olson Hall quarters, known as the Cuartels, during their stop at the southwest Georgia training post for the annual Army Maneuver Warfighter Conference. The senior leaders said they came away impressed with the renovation efforts at the barracks, which date to the 1920s and have for years housed Army noncommissioned officers attending advanced schooling at the installation.

Fort Benning began the Cuartels renovation project about two years ago and just recently completed the first of seven sections of the building to allow soldiers to begin moving into the upgraded quarters. That first section cost some $31 million, and Benning officials expect to spend about $30 million on the second. The full renovation, which should be completed in about a decade, is estimated to cost about $125 million, according to Amy Vaughn, resident engineer with the U.S. Army Corps of Engineers’ Savannah District, which is leading the effort.

The upgrades include complete renovations of the building’s antiquated heating, ventilation and air conditioning systems, its plumbing and its electrical systems, according to Derick Wolf, the chief of engineering for Fort Benning’s public works department. It also includes modern upgrades such as large bathrooms with walk-in showers, efficient toilets and LED lighting.

“I’m really proud of this. This is really cool,” Grinston said over the background sounds of hammers and power tools after viewing the upgraded quarters and rooms in a section that has yet to be completed. “We’ve got to keep pushing on it and making sure we’re renovating barracks like this.”

It was Grinston’s own inspection of Fort Bragg’s Smoke Bomb Hill barracks in late July that led installation leaders to order their near-immediate closure of 17 buildings — setting off the ongoing effort to relocate the nearly 1,200 soldiers living in subpar conditions. The 1970s-era barracks already had been planned for demolition or renovation in the coming years, but after Grinston found the quarters were hot, moldy and, in some cases, in disrepair, Bragg leaders determined they must close all the buildings as soon as possible.

The Army quickly moved some $115 million in its current budget to pay to demolish 12 of the barracks buildings and rapidly refurbish three others within about one year. Two of the Smoke Bomb Hill buildings already had been funded for some $30 million in renovations, which are expected to be completed within the next three years, Bragg officials said last week. The other three renovations will cost some $75 million and are planned to be completed within 12 months after contracts are awarded at the end of this month, officials said.

Wormuth said the rapid decision to shutter the Smoke Bomb Hill barracks and find the money to address the problem even before the next budget cycle showed her and other top service leaders’ commitment to “do what's necessary in the year of execution to take care of our soldiers” when “health and safety problems” come to light. She has long publicly stated soldiers’ qualify of life is her top priority.

But it should not take the Army’s top officials flying in from their Pentagon offices for installation leaders to realize soldiers are living in poor conditions in aging barracks, Grinston said.

Army leaders at every level — from the smallest units to those in charge of the service’s largest organizations — must listen to soldiers when they speak about their living conditions and take it upon themselves to visit barracks and other on-post quarters, the sergeant major of the Army said. They cannot simply rely on the most recent inspection grades in the Army’s internal systems to determine the state of barracks.

“So, if the system says this is the rating of that building, and you see something different, it takes leadership,” Grinston said. “That leader has to go, ‘Hey, wait a minute, this isn’t right.’ They have got to connect the dots at the ground level.”

Grinston said he recalled visiting Fort Benning’s Cuartels barracks several years ago at the request of another noncommissioned officer living in them who had complained about the conditions. Within a few years, the service had marked the old quarters for the ongoing renovations.

Wormuth on Tuesday morning told a packed auditorium of Maneuver Warfighter Conference attendees, including hundreds of uniformed soldiers, she had met with Defense Secretary Lloyd Austin on the previous day to discuss the service’s barracks issue.

“I think we have underinvested a little bit in housing, and so that is something that I am really, really focused on,” the Army secretary told the crowd. “I want to make sure that our soldiers — that you all and that your families have quality housing to live in. … And that’s an area I think [in which] we’ve got work to do.”

Barracks problems are not new for the Army. Soldiers for decades have complained of mold and inadequate heating, ventilation and air conditioning systems in their living spaces, even as Army leaders publicly pledged to do better.

At Fort Stewart, Ga., 3rd Infantry Division leaders Monday held a stand down for several units so soldiers could discuss moldy barracks with post leaders after troops raised the issue through official channels and via social media posts, officials at the base said.

Wormuth said such examples show how seriously she and other Army officials are taking the issue.

She pointed to myriad issues that have contributed to substandard housing and barracks. The Army is enormous, she said. It owns thousands of barracks buildings across the world. For example, Fort Bragg — the Army’s most populous base — has some 129 barracks buildings.

With so many buildings, it is not a simple task for the Army to budget for all the maintenance needed in its barracks or ensure it has insight about the state of every single room the Army owns, Wormuth said.

But she added soldiers’ living conditions probably have not been as high of a priority as they should have been for the service during two decades of war in Iraq and Afghanistan. More recently, the Pentagon has focused its top efforts on modernization, pouring hundreds of billions of dollars into new classes of weapons meant to prepare it for large-scale combat operations against rivals such as China or Russia.

“With everything that we were doing in the last 20 years, where the focus was so much downrange, you know, we probably were not paying as close attention to our own infrastructure, as we are right now,” she said.

She fingered one other major problem impacting living spaces across much of the Army — global climate change. Wormuth and other Army leaders have said hotter, wetter weather has made it more difficult to combat mold and air condition problems in their barracks and other on-post housing.

At Fort Bragg, officials said part of the reason that the problems at the Smoke Bomb Hill barracks arose was a hotter-than-normal summer that led to mold growth at levels that they had not previously seen. The problems were exacerbated by taxing old HVAC systems, which would fail, leaving soldiers suffering in sweltering rooms.

“A lot of places — just like where we are today at Fort Benning — it's getting hotter, you're seeing more extreme weather, more rain makes it harder to deal with mold,” Wormuth said. “I think that that has been a key part of the challenge.”

Grinston agreed, adding Congress must also do its part to ensure the Army can pay for the improvements needed to ensure barracks are hardened against a warming climate. Congress has failed repeatedly in recent years to pass a Pentagon budget before the beginning of the fiscal year, which begins Oct. 1, which can impact when military officials can begin projects including construction and renovations.

“It really does take timely, adequate and predictable long-term funding,” Grinston said. “And when you don't have that — when you don't know what [funding] is going to be exactly two years from now … It’s hard to go, ‘Hey, we’re going to renovate this level. We don't have unlimited funds in the Department of the Army.”