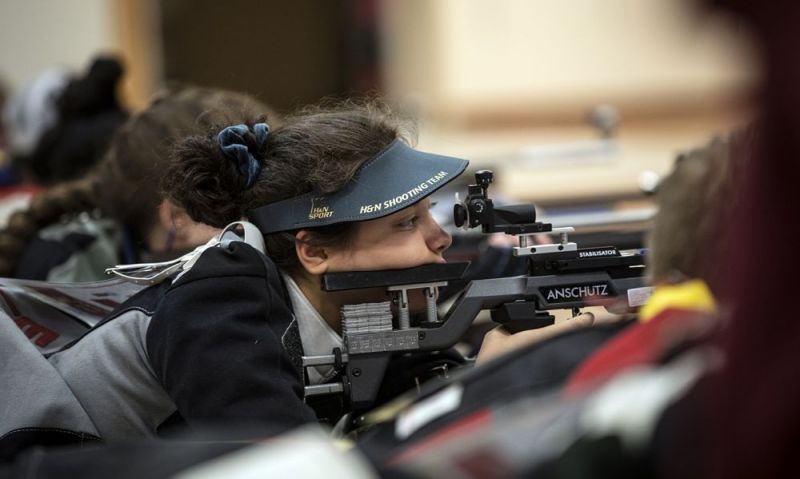 Legionnaire and retired Master Chief Dan Hackstein has been coaching air rifle for 18 years. As the coach for Zion-Benton JROTC in Zion, Ill., Hackstein has brought youth marksmen to Colorado Springs, Colo., for the past 10 to 12 years to compete in The American Legion’s Junior 3-Position Air Rifle National Championship. His two athletes that qualified for the national competition in sporter are in the top eight, advancing to The American Legion air rifle finals.

“I’ve been fortunate enough that cadets at Zion-Benton have qualified to come out and participate in this competition,” Hackstein said. “This is a competition that we always look forward to. It’s an opportunity to come out to Colorado Springs, to shoot at the Olympic Training Center … there’s nothing like it. It’s just a great, great opportunity for the competitors that qualify to get here. I can’t thank The American Legion enough over the years for putting this competition on and having all of us come out here and be able to participate.

“You know when you come here (to The American Legion’s air rifle competition) it’s about the youth.”

The American Legion’s Junior Shooting Sports Program is about the youth and the Legion Family’s commitment to the program. It’s that commitment that “really sends a message that this sport in particular takes so much support, be it family, your coaches, your chaperones,” said Auxiliary President Nicole Clapp who is attending this year’s air rifle competition in Colorado Springs. “If we (Legion Family) can help wrap around that family support with a program that can hopefully put them on a course for the future, or if it’s a hobby that’s wonderful too. But you’ve got a chance to help your educational goals later on with scholarship money from this competition. If we can help fulfill those dreams, that’s what the Legion Family is here to do.”

Watching The American Legion’s air rifle program for the first time is Sons of The American Legion National Commander Clint Bolt. “One of my big takeaways from this is getting the Sons more involved. I’m going to do all I can to promote more participation at the squadron level because they could help run this program at the post. It would be a perfect fit for them.”

As for the athletes competing, Bolt is “impressed that it’s a level playing field” between the boys and girls. “I like that. There’s no intimidation there. They are very focused. I’m impressed with these young people.”

Hackstein said that there isn’t a “I got an advantage because I’m male or female” mentality with shooting. Over the past five years, Zion-Benton JROTC has become “more female driven on the marksmanship team. Anybody can participate and do well in this sport if they put the time into it. From my 18 years of coaching across the nation, the amount of dedication that these youth shooters put into this sport is off the charts. It’s amazing what they do.”

Hackstein love’s “everything” about the sport of shooting. “I love the many opportunities for the kids to shoot. One thing I really like about marksmanship is that it’s so straight forward. Your score, there’s never any conflict because it is what it is. If I shoot a 3, it’s a 3. There’s no subjectivity to marksmanship.”

When asked what growth he sees in his athletes from the sport of shooting, Hackstein said, “I’ve seen a lot of respect that they’ve gained out of this sport, the amount of dedication they put into it, the extreme precision it takes to hit a pencil dot when you’re shooting on paper at 33-feet. And the joy that I see when they do well. The joy of when they shoot and they hit those 10s. I see that with my kids all of the time … the excitement and the expressions on their face when they are hitting those bullseyes, hitting those 10s.”