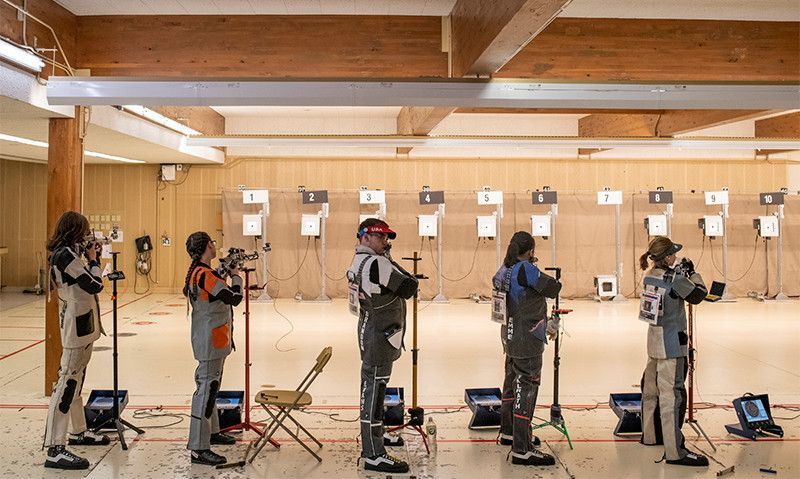 Over the past two days, the 30 high school youth competing in The American Legion’s Junior 3-Position Air Rifle National Championship in Colorado Springs, Colo., have fired 240 shots inside the USA Shooting Range at the U.S. Olympic Training Center. The scores have been aggregated and the top eight in both the precision and sporter are advancing to the finals Saturday morning where they will fire 10 shots in the standing position. Follow the finals here at 9 a.m. Mountain Time.

Returning competitor Braden Peiser of the Texas Hill Country Shooting Team heads into the final round for precision in fifth place. After competing in the Legion’s air rifle championship in 2018, Peiser is glad to be back and moving on to the finals. “I have been looking forward to being back here for a long time, just missing out on qualifiers so I’m really happy to be back,” he said. “It’s a fun match.”

Peiser will compete in the finals standing on the firing line alongside two of his teammates, Camryn Camp and Elizabeth Probst. When Camp walks into the range tomorrow in second place with an aggregate score of 2,382, she will get ready for the match by listening to music. “I love finals,” said the 16-year-old Camp. “I feel like finals is when you are the most focused, it’s go time, and I just feel like I do so much better in finals. So I’m excited for tomorrow.”

On July 21 and 22, the 15 competitors in both the precision and sporter category shot 20 timed shots in each of the three positions – prone, standing and kneeling – in the morning and afternoon. The back-to-back match is something Mikole Hogan is used to, yet it is still “tiring but fun,” she said. Hogan, who shoots for the Texas Houston Hotshots, heads into Saturday’s final round in first place for precision with an aggregate score of 2,383. The first-place lead “feels amazing. After today I didn’t think I did that great, so I thought I went down on placement. But knowing that I didn’t is a good feeling,” said Hogan, who has been shooting air rifle for five years.

It’s the individuality of the sport that Hogan likes about air rifle “where everything depends on me;” the community of it where “everybody supports each other; it’s an amazing sport to be in;” and what it has taught her. “It’s taught me teamwork being on team, self-dependence to rely on myself to get me to where I am today, also hard work and determination. Because without both of those, I wouldn’t be where I am today.”

The top eight precision shooters for Saturday’s finals and their aggregate score are:

Samantha Zermeno is in first place for sporter heading into The American Legion’s Junior 3-Position Air Rifle Championship tomorrow with an aggregate score of 2,210. “I worked very hard for this, and I am grateful to make it this far,” she said. This is the first time Zermeno has competed in a back-to-back match and while it was “draining,” it also was a “very fun experience. I tried to relax between matches, listening to music and trying not to stress myself out, and making sure to eat and drink enough. Just having positive thoughts in general; just protective, good thoughts.”

Zermeno, 17, has been shooting air rifle for three years. She likes the calm approach the sport requires, which has helped her with some anxieties. “In order to shoot you have to stay calm; you can’t let negative thoughts or doubts get to you,” she said. “So in order to do that you have to have protective thought, you have to tell yourself that you can do this.”

Two points away from Zermeno in second place heading into the finals is Taylar Crane of Minnesota with an aggregate score of 2,198. Crane started shooting air rifle when her grandfather took her to a gun safety class to be able to hunt. “We went in the basement, and they had air rifles lined up and there was a whole group of girls that were coaching everyone,” she said. “I shot my first target and fell in love with it right then and there. I was like I want to do this.”

Crane likes the sense of community that shooting sports provides, and the patience it takes to do well in the sport. “It takes a lot of patience, and I have a lot of patience, and I think that’s what helps my scores is keeping my patience,” she said. “Each time I practice I go through a match and then whatever position I’m not doing so well in I will practice that position. Whether it’s for four more targets or six. You learn patience, you learn a lot about yourself because it’s yourself, a target and a gun.”

Going into the finals tomorrow, Crane’s focus is to “take every shot as it is, keep my focus, and breathing is very important, stay hydrated and keep my patience. And have fun.”

The top eight sporter shooters for Saturday’s finals and their aggregate score are: