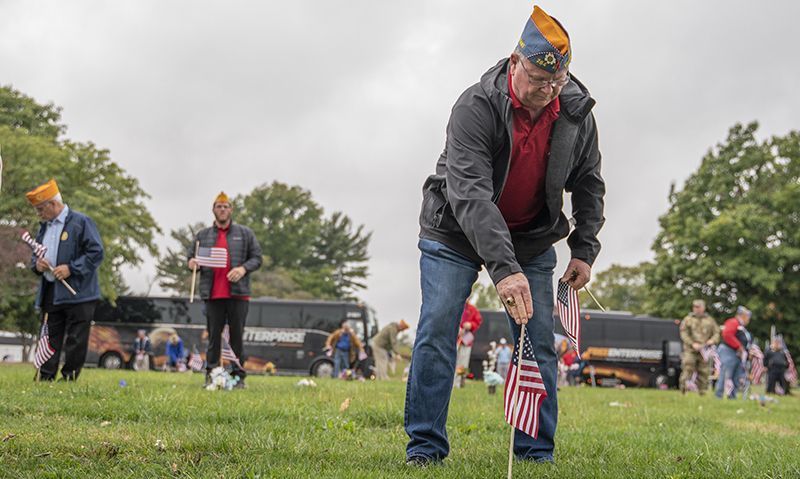 Sons of The American Legion member Kevin Chaplin of Virginia Squadron 284 places a flag on a veteran’s grave during a flag ceremony at the Lincoln Memorial Gardens Cemetery in Whitestown, Indiana, on Saturday, October 2, 2021. Photo by Ben Mikesell/The American Legion

“It was raining, but the good Lord has blessed us and kind of (cleared) the skies for a few minutes,” Fox said to those in attendance.

The event took place during the SAL NEC fall meeting and is part of Fox’s service project, Flying Flags for Heroes. The goal of the project is to place 1 million flags on veterans’ graves in local cemeteries nationwide during Fox’s year as national commander.

“No matter where you go, you’re going to find a veteran. And what we do throughout the year, as we place flags to honor our veterans, is to pay respect to all of those,” Fox said.

Among those participating in the event on Oct. 2 was SAL Past National Commander David Stephens.

“I think everybody is going to have some kind of emotion because they’re thinking about, not only are they placing a flag for the person who made them eligible for the Sons of The American Legion, but also for a veteran that’s maybe been forgotten,” Stephens said before the event. “And we want to make sure that our veterans are never forgotten.”

For more information on how to participate in Flying Flags for Heroes, visit flyingflagsforheroes.com.