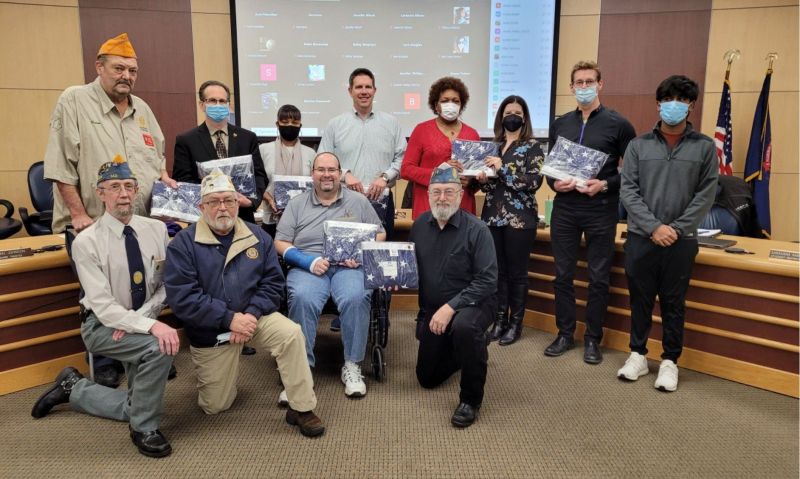 Members of the 18th District Sons of The American Legion in Michigan have dedicated themselves to a patriotic cause since 2004 – placing an American flag in every school classroom in Oakland County. To date, they have placed over 1,000 U.S. flags.

“We committed ourselves at the very beginning to make sure that every classroom in Oakland County had a flag in it so the kids have that symbol to say the Pledge of Allegiance to in the morning,” said Randy Jackson, District 18 Sons of The American Legion U.S. Flags for Classrooms chairman and a past state detachment commander. “It instills patriotism, Americanism and all of the things that The American Legion stands for and all that Americans should stand for. It’s just been a mission of ours.”

The 18th District Sons recently presented eight outdoor U.S. flags to the Avondale School District Board of Education to replace old ones. Jackson said when they offer and provide the new flags, school leaders “are just elated that someone thought enough of them to be able to do this for the kids.”

The classroom flag initiative for the district, which is made up of 15 squadrons, started when the daughter of the late David Kays came home from school and said there was not an American flag in her fourth-grade classroom to say the Pledge of Allegiance to. Kays spoke with the school principal for permission to put one up in the classroom. After receiving it, he then asked how many more classrooms needed an American flag. There was a need for 16.

Kays went to his fellow Sons of The American Legion members, who took up a collection and purchased the needed flags. “That was all that we needed to get this ball rolling,” Jackson said. “We decided to take this on as a county-wide project and we weren’t going to stop until every classroom in Oakland County had an American flag in it.”

Through fundraisers and personal and corporate donations, the 18th District has been able to purchase the flags and keep a supply on hand. All donations go to the David Kays Memorial Flags for Classrooms Fund.

Jackson’s wife, Alice, put together a letter informing the Oakland County School District about the availability of U.S. flags for any school in the district that needs them. “The request just started to trickle in,” Jackson said. “We have donated as many as 160 to a school district.”

The schools are also made aware that any worn flag can be dropped off at a local American Legion post for proper retirement.

Jackson said he “appreciates all of the work and effort that goes into this and all the people who help,” including donors, spouses and school board members.

Save
Tags: Sons of the Legion, Flag Advocacy