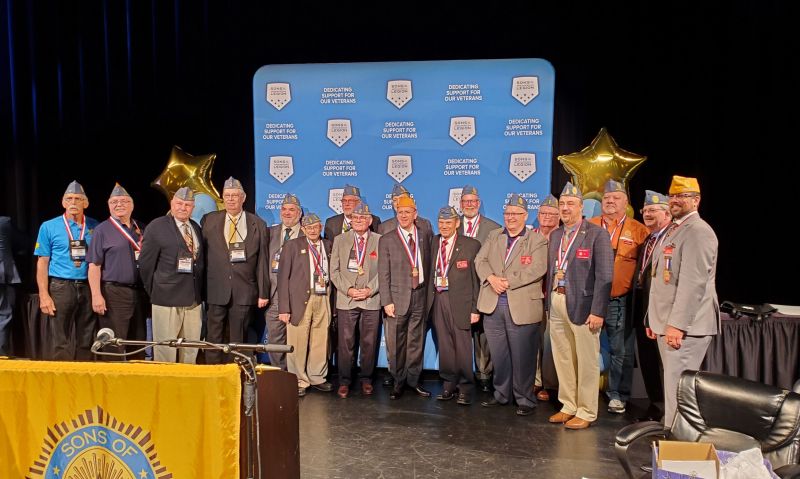 Joseph Paviglianti admitted it is an “audacious” goal: 1 million members of the Sons of The American Legion by the program’s 100th anniversary in 2032.

But he also expressed optimism that it’s a goal that can be achieved when he spoke about it during Saturday’s general session of the 50th SAL National Convention at Milwaukee’s Miller High Life Theater.

“We can be at a million members within 10 years if we plan accordingly and we look at how we do it sincerely and seriously and honestly,” said Paviglianti, speaking in his role as chair of the SAL Century Committee.

“Are you with me in getting to that audacious goal of 1 million members?” he asked to resounding applause. “It is possible.”

The goal may come, but it will do so without Paviglianti in as active a role. After 43 years in national office with the SAL, rising from assistant adjutant to adjutant to national judge advocate, Paviglianti announced that this convention would be his last as the SAL’s top legal counsel as well as his last as chair of the Century Committee.

“I have absolute confidence and great optimism about the future, where the Sons of The American Legion is going,” Paviglianti said.

That’s in part due to the strategic plan the SAL Century Committee has been working on since being established a year ago. Paviglianti compared the process to a marathon, not a sprint.

“I ask all of us to be a little patient” as the plan is developed, he said.

“We are in a multi-phased process of developing and gathering data on what exactly we want our organization to be as we move into our next century,” Paviglianti said.

In the wake of Paviglianti’s retirement, a resolution adopted unanimously by the SAL bestowed upon him the rank of honorary past national commander. He’s the third SAL member to receive that honor after Pat Shea, an endorsed candidate for the office of national commander who passed away unexpectedly 19 months before that election, and Brian O’Hearne, who served as a national vice commander and assistant adjutant before serving as national adjutant from 1999 to 2017.

“I failed as judge advocate, because part of the role as judge advocate is to see all resolutions that come through and make sure they have some sort of properness. I obviously screwed up on this one,” Paviglianti joked.

Resolutions. The SAL adopted two other resolutions Saturday. One would establish call-in rights for the program’s entire Legislative Commission for the duration of the annual Washington Conference, as the commission members are responsible for the wreath laying the SAL conducts at the Tomb of the Unknown Soldier at Arlington National Cemetery on the Sunday before the conference begins. The other resolution calls for adoption of American Legion Family Day to take place annually on the last Saturday in April, “when all American Legion posts throughout the nation open their doors to their members and the members of their local communities with the intent of celebrating all great deeds and works of the American Legion Family, with the intent to educate, recruit, recognize and give back to those members that continually support the gift of giving.” The event would also place special emphasis on the “Be the One” campaign.

“At the end of March, we were just under 250,000 flag placements,” Aboudara said. But some innovative activities and buy-in from the entire Legion Family helped shatter Fox’s goal of 1 million flags placed on veterans’ graves at local cemeteries.

“As of today, we have placed just over 1.835 million flags at the gravesites,” Aboudara said.

Fox said, “Flying Flags for Heroes was about getting our message out, getting outside of our four walls, getting back in the communities where the American Legion Family dominated in the 60s and the 70s and into the 80s. We can’t be complacent; we have to continue to strive for greatness.”

The SAL national convention concludes Sunday with the election of the next national commander.