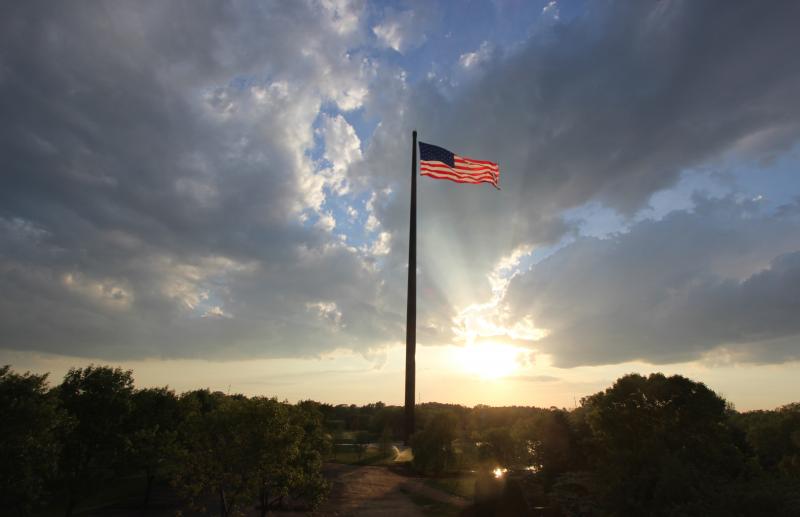 The "world's tallest tribute to freedom," is a 400-foot tall flagpole waving an American flag that's 7,200 square feet. The pole is about 100 feet taller than the Statue of Liberty, its flag is four stories tall, and it stands in an unlikely location: an insurance company campus in Sheboygan, Wis.

"The purpose No. 1 was to sincerely thank veterans. No. 2 was to be a source of inspiration," Sheboygan resident and Acuity CEO Ben Salzmann said. He said he wanted the flag to comfort and inspire those that had served, as well as serve as a challenge for the country "to remain a key player in making this world better. So the inspiration is retrospective and prospective," remembering "how fortunate we are and the obligations we have."

The flag was dedicated June 16, in a ceremony that included Gov. Scott Walker, a Legion Rifle Volley, Navy SEALs and a full color guard. Former American Idol finalist Danny Gokey sang the national anthem as the flag was raised.

It has inspired more than just residents and passersby. A video describing the tallest American flag's pole construction has gone viral, with more than 2.1 million views and nearly 60,000 likes on Facebook.

But clicks aren't the only numbers to be counted.

The stars measure 3.5 feet. Each stripe is more than 4 feet wide. The pole itself, weighing in at 420,000 pounds, required 500 gallons of paint. The foundation holds about 55 tons of rebar. Three pendulums ensure it can take vibrations while working as dampeners, and it can withstand the severe northern temperatures — prepared to deal with cold as low as -42 degrees. A 220-pound flag flies during normal weather; a 350-pound one for harsh conditions. Old Glory even has her own seamstress. The flag takes "at least a half dozen" people to raise and lower it, Salzmann said.

These heights were reached after considerable difficulty. This engineering-feat was the product of three failed flag projects: The first, due to torque, was taken out by wind. The second pole corroded, not for lack of care but because of the state's extreme temperatures the pole has its own climate inside. The third was a victim of harmonic motion — essentially the problem was how to attach something so large to the ground but account for vibration, Salzman said. The original went up after 9/11, as a symbol to aspire to.

"We've learned a lot from our prior attempts. This flagpole is a culmination of all those lessons. ... A flagpole may seem simple but it's its own building in its own right," Sheri Murphy, Acuity vice president of services and administration, said.

"It's more complex than a skyscraper in some ways because it's a single point without all the infrastructure of a building," Salzmann said.

So this time, they knew finding engineers that could do the job was imperative. Enter Mortenson Construction and Broadwind Energy. Broadwind, which now produces wind turbines, helped manufacture submarines during World War II, and fabricated the six 65-foot sections of the flagpole. Each section was trucked separately to the site. The top section of the pole rotates, nullifying many of the problems wind presents. Ventilation will help with potential climate and corrosion issues.

"It almost gives you the feeling of having 65-foot submarines stacked on top of each other so we addressed the strength issue," Salzmann said.

Many have drawn from this strength. It provides "a symbol of strength and fortitude and perseverance for a lot of different people," Murphy said. She said the company has received hundreds of emails and voicemails from people who the flag has meant something to, including people with terminal illness and those who have lost loved ones. "Their feet are so heavy they can barely make it through the day and they see the flag."

"It isn't just a matter of we put up this the world’s largest symbol of freedom, but rather we did this three times and still didn't give up," Salzmann said. "This time around, it’s just the pressure we’re all feeling in America, and everybody's seeing it as a rallying point."

The project was constructed "meaning to give everyone an extra bounce in their step," Salzmann said. He said he’s received messages from truckers on the highway, "It's such a great feeling when I see the flag because I know I'm almost home," they read.

Sheboygan residents have taken the flag's care into their purview.

"If there's a rough storm and (the flag) starts to tatter, the switchboard lights up," Murphy said.

Police, some of whom are veterans, will do an extra lap to check on it, Salzmann said. He’s come upon police who have just stopped on their routes to admire it.

"If you were sitting in my office right now and looking out the window at this (60-foot by 120-foot) flag completely unfurled — when it gets that big it doesn't flap in the wind, you have several waves going through it at a time."

"If you put up a flag, you don't own it. You’re a custodian," Salzmann said.

While what can be seen looking up, hand over brow, in the sky is impressive, what's underfoot on the ground beneath that's a true source of inspiration. Engraved bricks mark the names of every known Wisconsin veteran killed in action from the Civil War to the present.

"I have to believe it's our veterans that ... give others that strength to dig deep and face whatever they might be facing on that given day," Murphy said.