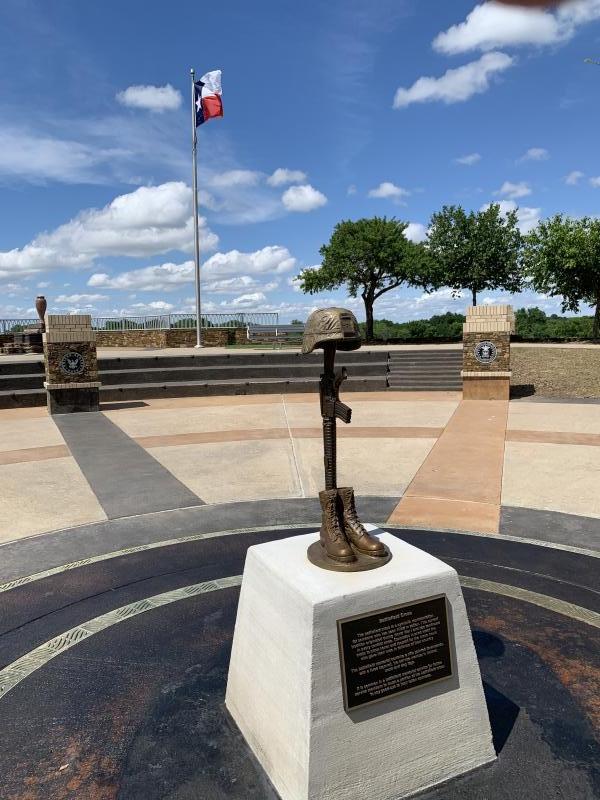 The City of Frisco has a proud history of service to others and honoring its veterans, dating to 1948 with the creation of the first memorial that recognized those who fought in the two world wars. In 2004 Frisco constructed a new Veterans Memorial in Frisco Commons Park, which was expanded in 2014 to include a Walk of Honor and plaques describing many of our nation’s wars and conflicts since Frisco became a city in 1902.

The most significant upgrade to the Veterans Memorial since its 2004 dedication was recently completed. Hundreds of patriots witnessed the upgrade at the 2021 Memorial Day ceremony. More than 25 specific improvements and additions were involved in the yearlong project, including new and updated informational plaques, stonework repair, concrete staining, landscaping, lighting and a “Battlefield Cross” centerpiece. Onsite QR codes provide an interactive map to guide guests through the memorial. An impressive Gold Star Family Memorial Monument was recently dedicated near the Memorial. A Veterans Memorial website is planned and will provide a variety of digital content, including Frisco-veteran video profiles.

Post 178 Commander Fred Rogers added, “We are proud to have played a part in this revitalization that will serve not only veterans but the entire community with a visual and educational experience.” To learn more about Post 178, visit friscolegion.org.