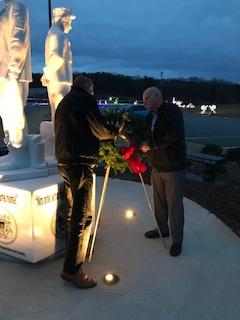 Every night roughly 49,000 veterans find themselves on the street homeless. To call attention to this issue. Mike Satterly, deputy director of the Cherokee County Homeless Veteran Program (CCHVP) and service officer for Post 316, led a candlelight vigil at the recently dedicated homeless veteran statue this past Dec. 21. The date and time of the ceremony served as a reminder to all that that would be the longest night of the year homeless veterans would have to live out on the street alone in the cold, some without cover or food.
CCHVP dedicated the nation's first Homeless Veteran statue this past January at the Cherokee County Veterans Park just outside Canton, Ga. The statue is a reminder to us all that the issue of homeless veterans goes back to the Revolutionary War and has been part of our society ever since, noted Jim Lindenmayer. director of CCHVP and service officer for Post 45 in Canton. Homelessness for the veterans who volunteered or were drafted to serve this county should never happen, and we owe veterans, including homeless veterans, a debt of gratitude for their service.
The marble statue depicts two life-size veterans, one male and one female, standing on a pentagon base displaying the five branches of the military. Inscribed on the base is the phrase, “No Veteran who fights for this country, should have to fight for a job, a roof over their head, or the health care they need when they come home.” That depicts their plight faced in society today. The two statues do not have any rank, as veterans of all ranks are subject to being homeless.
Cherokee County is not immune to homeless veterans. We have processed over 85 this year, some single, others with families, some from current conflicts and others from past conflicts, noted Lindenmayer. Some really stand out, such as a decorated Army Ranger. He is homeless, and has been for a number of years, and suffers from PTSD. He deals with his PTSD by self-medicating to forget the close combat incident he had, so that he can sleep.
The statue, and much of the work done around its installation, was donated by people like Joseph Hickey, CEO of Macedonia Memorial Park, and his business partner Bart Williams, as well as a number of local veteran-owned businesses and the Home Depot Foundation. The entire project was 100 percent funded by the Cherokee County veteran community.