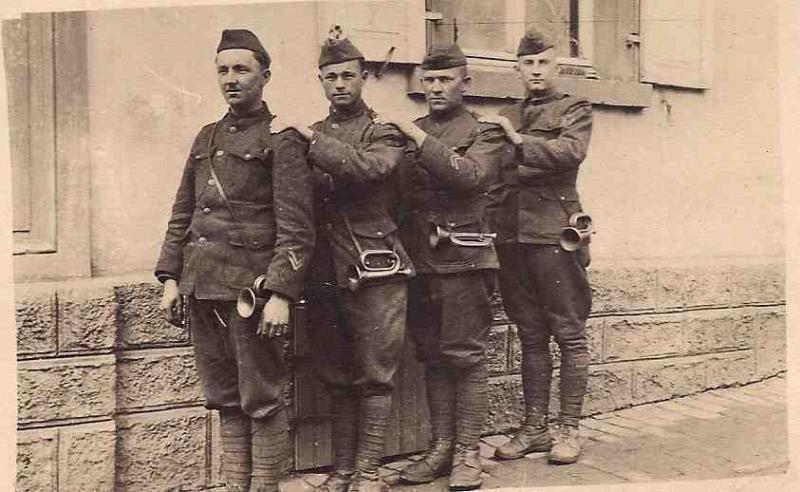 In the summer of 1917, entering World War I was unavoidable by the United States. The German U-boat submarine assault on shipping heading to Great Britain had only intensified the call to arms for the U.S. to enter into the war. The sinking of the British ocean liner Lusitania in 1915 was the catalyst that turned the tide of American opinion against Germany.

In February, the U.S. Congress passed legislation providing $250 million in arms appropriations to prepare the U.S. for war. By March of 1917, the sinking of four U.S. merchant vessels pushed President Woodrow Wilson to call for a declaration of war against Germany. This rallied the nation and spurned every capable young man into action, including my grandfather.

My grandfather, Leo Foster, was a musician in a trio with his two older sisters, Mary and Cunigunda (Cuni for short). They played evenings at various establishments in the city of LaCrosse, Wisc., helping the people in this Mississippi River town to drown away their worries and sorrows and provide soothing musical entertainment during this anxious period. Little did he know that his musical talents would play a major factor in the ensuing war.

It must have been a difficult transition for his mother, Barbara. She had been widowed by the death of her husband John in 1895. She had lost an infant son to sickness in 1894. Now her only remaining son was heading off into The Great War. Her only comfort was in the fact that many of Leo’s friends and family friends were being drafted into the war effort, which allowed them to comfort each other and share information from letters and postcards throughout the war.

I don’t have a date or any information concerning what was most likely the final concert that was given by the Foster family musicians, but assume that it must have been a somber occasion. Playing hits of the day such as “Poor Butterfly,” “Hush-a-bye My Baby,” “Pack Up Your Troubles in Your Old Kit Bag,” and “America, Here’s My Boy” probably preceded the playing of a very patriotic “National Anthem.” I can imagine the tears rolling down my great grandmother’s and my great aunts’ faces with the realization that her son and their brother was soon to depart on his war journey.

For many in this time period, the Civil War horrors and Spanish-American War memories were still fresh in their minds. War was hell, and World War I would be no different.

Leo’s musical talents earned him a prestigious job in the 32nd Division. He was assigned as a bugler, and would put him in close proximity to the command element throughout the war.

Whether his mother knew it at the time or not, it was a hazardous position in any infantry unit. In addition to the standard reveille and Taps calls, the bugler blurted out command signals for the troops during action. To do so required him to stand tall and play the instrument with great force so all could hear over the rattling of machine guns and the explosions of artillery shells. He was a strategic target for the enemy. Cutting off lines of communication in war was an essential objective for the enemy, and my grandfather would realize this early in his travels.

At Camp McArthur in Waco, Texas, he was assigned to several different units before ultimately being assigned to Company C, 121st Machine Gun Battalion. After several months of warfare training, his unit was transported in January 1918 to Camp Merritt, N.J., 10 miles from New York City.

On Jan. 24, 1918, the advance party of the 32nd Division landed at Brest, France. The American Expeditionary Force (AEF) had finally brought much needed relief to the European theater. One of the many troop transports ferrying American soldiers to Europe, The USS Tuscania, was sunk by a German U-boat on Feb. 5. It was carrying equipment and men from the 32nd Division. Thirteen men were killed in the attack, and it brought to the home front the reality of war. Surviving the trip through treacherous submarine-infested waters, my grandfather arrived in France with his unit in late-February.

The 32nd Division became the sixth division to join the AEF in France, setting up headquarters at Prauthoy, Haute-Marne, approximately 190 miles southeast of Paris. During the months of March and April, the 32nd Division became a replacement organization. All personnel with a rank of private and captain in the 128th Infantry Regiment were transferred to the 1st Division, and the 32nd Division was finally battle ready with training completed.

During May, the first elements of the 32nd Division were transported to and took over the front line trenches in Alsace France, 18 miles from the Rhine River and German occupation forces. Over the course of June and July, the 32nd Division endured constant enemy fire and shelling. According to one of my grandfather’s letters he sent to his mother, he told of how he was “out for a stroll” in the woods when an artillery barrage opened up on his position. One shell landed approximately 30 feet from him.

Under fire every day, the 32nd Division distinguished themselves in the Alsace trenches by their persistent and ferocious attacks. They were given the name “Les Terribles” by the French, as this single division fought bravely against three German Divisions: the 30th Bavarian Reserve Division; the 44th Landwehr; and the 25th Landwehr.

After a 10-day rest period, the 32nd Division relieved the 3rd Division on the Ourcq River in the Aisne-Marne. Their mission was to achieve Generalissimo Foch’s (French General of the Allied Forces) battle plan of busting through the German line of occupation. Advancing 12 miles, they broke through the German lines, conquering the entrenched German army and captured Fismes, France. They they marched 13 miles back to the west and north repulsing the German army to the Vesle River before being relieved. They encountered fierce fighting from three German Divisions: the 200th; the 216th; and the 4th Prussian Guards. Known as the Aisne-Marne Offensive, the losses sustained by the 32nd Division totaled 3,547 from killed in action, to injured and missing personnel. Burial squads assigned to bury deceased German troops reported burying more soldiers than those killed and missing from the 32nd Division.

It was during this offensive that my grandfather was wounded in action. On Aug. 1, an enemy artillery shell landed in close proximity to where he was stationed. Shrapnel from the blast pierced his arms, chest and legs. Originally thought to be KIA, he was reported with that status. Due to the “fog of war” and lack of good communication, his mother was notified by the War Department through a courier that her son had been killed in action. I can only imagine the grieving and sorrow in the Foster family and their close friends when they heard the news. My great grandmother proudly flew a flag over her home following the terrible news. About three days later, the Red Cross delivered the unbelievable news that Bugler Foster was alive and recovering from wounds sustained in France. Though it was the best possible news that Barbara, Mary and Cuni could get, their tears of joy probably turned to tears of fears, not knowing the extent of his injuries sustained at the time. The injuries and recovery period kept him out of the fray for the next 45 days. He rejoined his unit somewhere near the end of September.

After a much needed break from the fighting, the 32nd Division entered the front line northeast of Soissons, France, as the only American Division assigned as part of French General Mangin’s famous 10th French Army. During the fierce Oisne-Aisne Offensive, the 32nd Division advanced about 3 1/2 miles through entrenched German forces made up of five divisions: the 7th; the 7th Reserve; the 223rd, 227th and 228th. Total casualties amounted to 2,848 including KIAs, wounded, and missing. In capturing the strong German positions on the Juvigny Plateau, the 32nd Division contributed to the French 10th Army outflanking the German line on the Chemin Des Dames, a strategic ridge that runs from east to west.

My grandfather rejoined his unit in late September, just in time to be a part of one of the greatest battles of WWI, the Argonne-Meuse Offensive. On Sept. 30, the 32nd Division entered the front line of the Kriemhilde Stellung, more commonly known as the “Hindenberg Line.” Though identified as a line, Lt. General Bullard, commander of the 2nd U.S. Army described it this way:

"The way out is forward, through the Kriemhilde Stellung, eastern section of the Hindenburg Line. ... Not a line, a net, four kilometers deep. Wire, interlaced, knee-high, in grass. Wire, tangled devilishly in forests. ... Pill boxes, in succession, one covering another. No 'fox hole' cover for gunners here, but concrete, masonry. Bits of trenches. More wire. A few light guns. ... Defense in depth. Eventually, the main trenches. Many of them, in baffling irregularity, so that the attacker cannot know when he has mopped up. ... Farther back, again defense in depth, a wide band of artillery implacements."

Over a three-week period and in a series of offensive attacks, the 32nd Division broke through the German line and pushed through the Kriemhilde Stellung approximately five miles. They battled 11 German divisions: the 3rd and 5th Prussian Guards; the 28th Division, known as the “Kaiser’s Own;” the 13th, 37th, 39th, 41st, 52nd, 115th, 123rd, and 236th Divisions. The 32nd Division sustained 5,950 casualties to include missing personnel during this offensive.

In the last action of the war on Nov. 6, the first elements of the 32nd Division entered the front line at Dun-sur-Meuse bridgehead. They attacked the German 192nd Division east of the Meuse and offensively positioned when the armistice was signed on Nov. 11. Advancing as the front line of the U.S. 3rd Army, they crossed the Sauer River into German territory on Dec. 1. They remained as an occupation force in the Coblenz sector for several months after the armistice was signed.

My grandfather wrote as often as he could to his mother, sisters and other friends of the family. He told of running into friends assigned to different divisions throughout his time in the war. While staying in Luxembourg, he wrote of how the mayor of the city they were in awarded them medals for their actions to keep their country safe from the Germans. As it turned out, he returned home in June 1919.

On Jan. 20, 1919, Bugler Leo Foster of Company C, 121st Machine Gun Battalion, 32nd Division, was awarded the Wound Chevron, for wounds obtained in action on Aug. 1, 1918. Worn on the cuff of the right sleeve, these stripes were gold in color. The Wound Chevron remained until 1932, when the Purple Heart medal was authorized. My grandfather exchanged his chevron for a Purple Heart.

Bothered by his wounds throughout his life, he would never complain but often relented that the weather was going to be changing, because he felt it where the shrapnel had pierced his body. I wish so much that I had been old enough to take the time to talk to him about his experience. I was only 13 years old when he passed away. Every year he would get together with the last remaining members of his unit in Lacrosse. They all agreed that when the numbers dwindled to less than five alive, they would open up a bottle of Cognac they had procured in France during the war. He never had the opportunity to toast his fellow soldiers.

The bugler’s mission in WWI would be replaced in the coming years by more advanced communication equipment and procedures. For a short time in World War I, my grandfather was given a special duty that only some were called to do. The 32nd Division and all of its members were “Les Terribles” to the German army. I am very proud of my grandfather and the test of endurance he went through during World War I with his 32nd Division buddies.