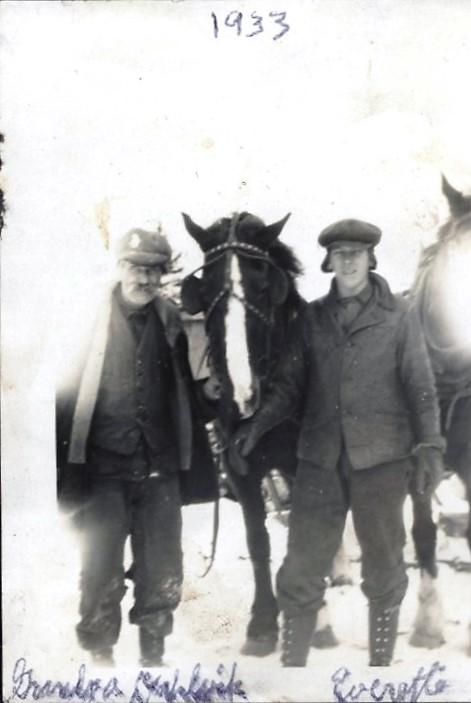 Jakob looks around his village of Nykarleby, Finland, blighted by backwardness and no future. He decides his family's future lies elsewhere. Jakob is 26 and married to Johanna. They see a future in the United States. They save money, and he sets off to find them a new life in a faraway country. My grandfather’s story was told to me by my father, Everette Dahlvik, a WWII veteran.
Jakob signed with a timber company recruiting people from Europe to cut virgin timber in North America. His contract: work to pay his and Johanna's passage to America. He went in 1894 and cut for five years. Johanna joined him in 1899.
His timber camp was in Upper Michigan (where I was born). The work was hard, and my father told me it changed his future. Jakob destroyed his back lifting and moving the huge logs. Due to that my dad had to quit school to help the family survive. He loved school, and he always felt bad missing it.
When Johanna came, they both worked several years (Johanna cooking) in the timber camps. Finally, they were free to live their lives. They homesteaded land near Manistique, Michigan.
When my grandparents immigrated, the U.S. economy was booming and strong. Immigration strengthened tolerance in our society. New immigrants represented a large total of the population. Migrants were so normalized that, beyond some bad-taste jokes, xenophobia was not a large problem.
The 19th and 20th centuries saw the economy grow exponentially and governments of all stripes favored immigration, seeing it as a tool for development. This, and the support it received from the press and most intellectuals, earned it acceptance among U.S. citizens.
Immigration strengthens tolerance when receiving societies are strong and confident enough to welcome them. But when the receiving country feels weak, outsiders with different beliefs and cultures seem threatening, an ideal tool for extremists determined to polarize society and justify their policies.
Populists of the left and right know that when people feel threatened, they want an outsider to rally against. Linking immigration to existing problems, like economic crisis, violence, terrorism or unemployment, weakens tolerance, but this kind of scapegoating is not a reaction to newcomers at all. It is simply the political strategy that yields the best political results when economies can no longer provide rising living standards for everyone.
Some say "Make America Great Again." I say, "Make America Strong Again."