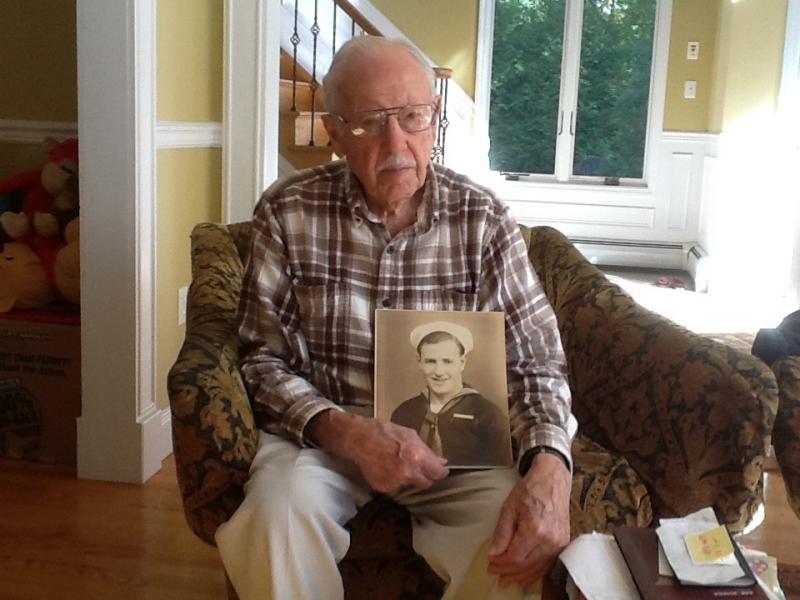 More than 10 years after its discovery, the story of the USS YF-415 continues to intrigue. It was hard to imagine when the first dives were made on July 20, 2003, that those dives would uncover history that has impacted people, connecting them to their families, re-connecting them to their past and perhaps bringing closure to a tragic accident. In July 2013, we were contacted by Lisa Bertone, daughter of Isidore “Teddy” Bertone, a sailor aboard the USS Zircon. He wanted to tell us his story about the events of May 10, 1944, and correct inaccuracies in the reports about the role of the Zircon. Almost 70 years after the sinking of the YF-415, the story of the USS Zircon has emerged and given yet another perspective on this tragic accident.

On May 10, 1944, the YF-415 departed for the Naval Ammunition Depot in Hingham, MA under the command of Chief Boatswain’s Mate Louis B. Tremblay of Marblehead, MA. The ship’s orders were to proceed to Hingham and load ammunition that would be disposed of in deep water off Boston. The YF-415 planned to take on additional crew at Hingham to assist in the disposal of the ordnance. Previously, the ship had made two such excursions to dispose ordnance and these had been uneventful.

The ship was loaded with approximately 150 tons of ammunition, which included obsolete pyrotechnics, black powder, and 50-caliber projectiles ranging from 3 – 5” in shell size, among other miscellaneous ordnance. The YF-415 was loaded to its maximum draft, though some claimed the ship was further weighted down to its gunwales. There was no official protocol, other than a pre-departure briefing from an officer with regard to procedures for the safe handling of the ammunition.

The YF-415 departed Hingham with five officers, ten men comprising regular crew and an additional work crew of 16 African-American men from the Hingham ammunition depot for a total of 31 men. While underway, the crew prepared the ordnance for disposal, which involved sequestering projectiles from other explosives in anticipation of disposing of the most dangerous material first. At about 11:30 am on May 11, the YF-415 arrived in the disposal area where the crew proceeded to dump nearly two-thirds of the cargo, including much of the black powder and projectiles, uneventfully.

The rockets intended for disposal were normally buoyant and required special preparation to sink them, which called for the containers to be punctured following the removal of the package of matches. These measures would ensure that there was no chance of accidental ignition and that the containers sank as intended. However, the men were instead instructed to jam projectile shells into the rocket containers to make them sink and crush the containers to keep the projectiles from falling out. Despite orders from the Bureau of Ordnance to only punch holes in the buoyant containers to ensure sinking, this procedure was not followed.

At no time did any officer, whether at the Hingham Ammunition Depot, or on board the YF-415, inspect the rocket containers to ensure the matches had been removed.

At approximately 11:30, the crew began dumping the ordnance. The relatively inexperienced enlisted African-American men from Hingham were charged with disposing the rockets. The disposal process proceeded as planned and without incident. However, according to Chief Boatswain’s Mate Tremblay, who was observing the disposal operation, he later testified that at about 12:30 pm he heard a “terrific whoosh” – a fire from an explosion of rockets, which set off a chain reaction of explosions, quickly engulfing the port side of the ship, spreading from amidships to the entire main deck.

The fire aboard the YF-415 raged uncontrollably and attempts to man firefighting equipment were unsuccessful. Many were temporarily trapped in the crews quarters, located in the forward part of the ship, as intense flames and heat seared the lighter. One crewman, William J. Bradley, though he managed to escape from the engine room, suffered third degree burns over 76% of his body and later died. Most men drowned in the water, awaiting rescue. One sailor, Seaman second-class Yeo Jin was reported to have jumped into a shower during the panic in an attempt to shield himself from the fire on deck. He would not leave the crew’s quarters despite the efforts of his fellow sailors. They were eventually forced to leave to save themselves. They did not see Jin alive again.

Numerous ships and vessels operating in the area were dispatched to conduct search and rescue operations. The USS Zircon, a nearby weather-observing vessel, rescued fourteen survivors, four crewmembers of which one later died from severe burns, and ten men from the Hingham contingent.

The YF-415 sank into 230 feet of water. The missing sixteen men’s bodies were never recovered. Although there was a US Naval Inquiry and some news coverage of the accident, the story largely ended there until the wreck’s discovery in 2003. However, the story of those involved aboard the USS Zircon and the heroism displayed by these young men was largely unknown until present day.
The USS Zircon:

The USS Zircon (PY-16) was a private yacht procured by the Navy and converted into a weather observing vessel. On the day of the YF-415 sinking, the Zircon was on convoy duty, looking for u-boats and making weather observations in preparation for the June 1944 invasion of Normandy. The crew of the Zircon was made up by men mostly from New York, some of who were from the same neighborhoods and during their time on the Zircon, formed close bonds that have carried forth throughout their lives. Such is the story of Isidore Bertone and Anthony Sussino, close friends and young crewmen aboard the USS Zircon.

The Zircon had a crew of African-American sailors as well, and during a time discrimination was common, Captain Douglas C. Bird of the Zircon showed little tolerance for it, and insisted all men be treated the same. For this reason, it was not hard to see that the crew of the Zircon could work together, and be capable of acts of heroism.

When the Zircon got the call to proceed to the YF-415, it was on a day with fog and limited visibility. Upon arriving on the scene, some of men were below decks having finishing lunch, while others were on deck. When the general quarters alarm sounded, the men jumped to action and began looking for survivors. At first it was thought the YF-415 may have been torpedoed, but when shrapnel began striking the Zircon, they knew it was something else.

It is here where reports differ. News reports published suggested the Zircon was unable to get very close to the YF-415, but that was inaccurate. The men of the Zircon took great risks to rescue as many men as possible. As they approached the YF-415, they were struck with shrapnel, shells, and explosives; they observed debris, including men’s limbs, floating in the water. Still, they pressed on to rescue survivors. Sailor Johnny Powers took to the water in a motor boat, coming right up to the YF-415 to rescue men. He was later awarded the Navy Cross for his heroic efforts.

Both Isidore Bertone and Anthony Sussino described horrific scenes of attempting to rescue men so severely burned their flesh was coming off. One man brought aboard the Zircon was so severely burned not even the doctor aboard the vessel could help him. He died on deck aboard the Zircon. For young men in their late teens and early 20s, it is difficult to appreciate the impact this has on a person throughout their life; however, nearly 70 years later, both men describe the events as if they occurred yesterday, with great conviction, passion and emotion.

Following the rescue, the USS Zircon was ordered to return to Boston, where they were denied liberty and not permitted to go ashore or speak with reporters. The negligence that led to the YF-415 accident was largely brushed away and the story was quickly pushed out of view. However, the men of the Zircon felt as though they did not receive the credit they deserved for their heroic acts that resulted in 13 men surviving the disaster.

The story of Isidore Bertone and Anthony Sussino highlight another chapter in the story of the USS YF-415. It is this aspect of shipwreck exploration that is the most rewarding. The ability to uncover history and to bring to light forgotten or never-told stories that matter to people is a corner stone of shipwreck exploration. When we called Anthony Sussino and introduced ourselves, stating we were calling about the YF-415, he responded, “You’re calling 70 years too late!” Nevertheless, a generation later, the story has been told, and hopefully brought closure to those involved while reminding us to be grateful for the sacrifices, big and small, of those who served in World War II.

It is our hope that with the coming 70th anniversary, a larger review of the story will be covered by a national newspaper, truly honoring those that were part of the USS YF-415 rescue.