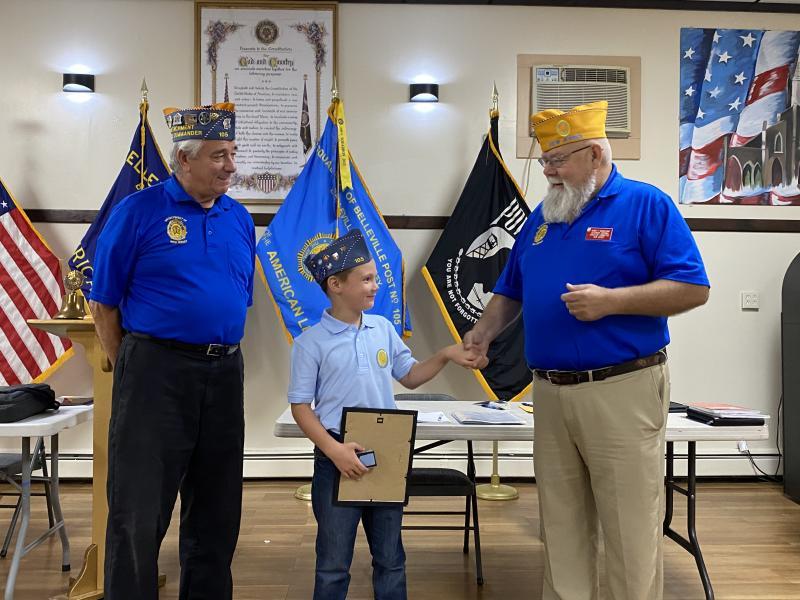 Jake Myers of Sons of the American Legion (SAL) Squadron 105 received the Ten Ideals Award at a regular meeting of the squadron in September. Following a course of study, Myers became only the second young SAL in New Jersey to receive the award in 2022.

Alternate National Executive Committeeman (ANEC) Henry Hasselhan, of Squadron 311 in Atco, presented Myers his award. As one of New Jersey’s representatives to the organization at a national level, it was an honor to have Jake receive his award from a national delegate. Alongside the ANEC, Squadron 105 Commander Steve Sangemino presented the actual medal.

The certificate accompanying the medal reads “IN RECOGNITION OF HIS EFFORTS IN THE
PROGRAM LEADING TO THE AWARDING OF THE SONS OF THE AMERICAN LEGION TEN IDEALS MEDAL.”

“There are a lot of older Sons who don’t have this,” noted Hasselhan at the meeting. “It’s very rewarding to see these young gentlemen come up, because they are the ones who will be replacing us.”

Sangemino remarked that “yesterday I remember when we had to help him [Jake Myers] onto the stool, he was so small …. Now he’s winning national awards.” In echoing what Hasselhan commented, Sangemino said. “He’s part of the future of the SAL.”

The award – a medal suspended from a blue ribbon – is a national award for younger members, given out at the squadron level. It is given in recognition of completing a program of Patriotism, Health, Knowledge, Training, Honor, Faith, Helpfulness, Courtesy, Reverence and Comradeship. Young Jake completed the course with his dad, Rusty Myers, who is the adjutant at Squadron 105 in Belleville, but is also the Children & Youth Commission chairman at the state level for the SAL.

“I’m so very proud of Jake, in that he is one of the very few who have gone through this course,” remarked proud dad Rusty. “I would love to push this program at the detachment [state] level, and have squadrons throughout New Jersey do this with their younger members. It’s a great way to engage the youth in the organization and have them learn what it is to be a citizen and a member of the Sons of The American Legion, building tomorrow's leaders.”

Jake, who is 7, and been a member for three years as an SAL, is eligible for membership through his grandfather Russ Myers, a 52-year American Legion member of Whippanong Post 155, who served in the U.S. Army in Vietnam.