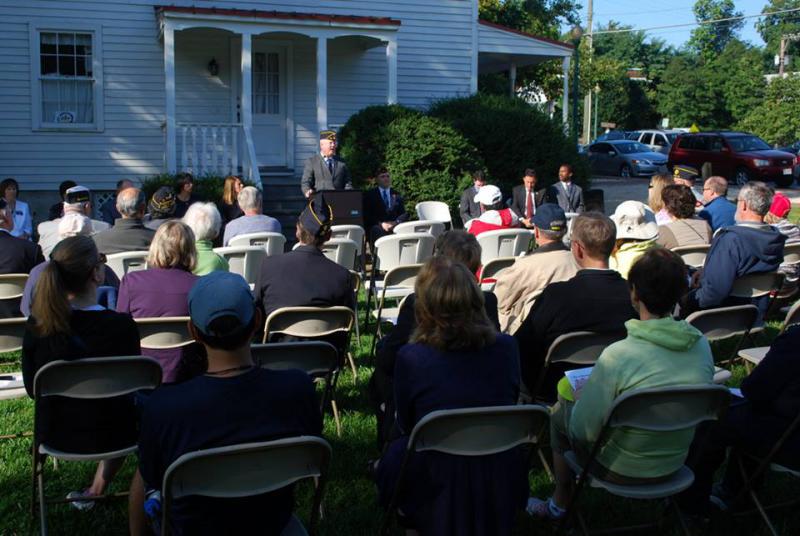 It was a cool, crisp morning as more than 50 community members, leaders and Legion Family members gathered together to either participate in, or observe, the 9/11 remembrance ceremony that was held at the Town Green on Sept. 11, 2017. The church bells next to where the ceremony was being held, rang their bells six separate times between 8:46 a.m. and 10:28 a.m. to signify the times the planes hit the World Trade Center’s North and South towers along with the Pentagon; when Flight 93 crashed in Somerset County, Pennsylvania, and also as the two towers fell 16 years ago.

At 9 a.m., the ceremony began with the Dyer-Gunnell American Legion Post’s Color Guard, led by Past National Commander Dan Dellinger, marching to the center of the podium to present our nation’s flag to the audience as the National Anthem was played once they were in position.

Post Commander Jason Feimster introduced Vienna, Va., Mayor Laurie DiRocco who read a Proclamation to memorialize those lives lost on Sept. 11, 2011, as a “Day of Remembrance.” Retired Marine Col. Jerry Driscoll (and new Post 180 Legionnaire) delivered a moving keynote address which included a personal loss he had experienced as a direct result stemming from those actions that day. His message hit home and confirmed why we continue to come together each year on this day and why we will never forget.