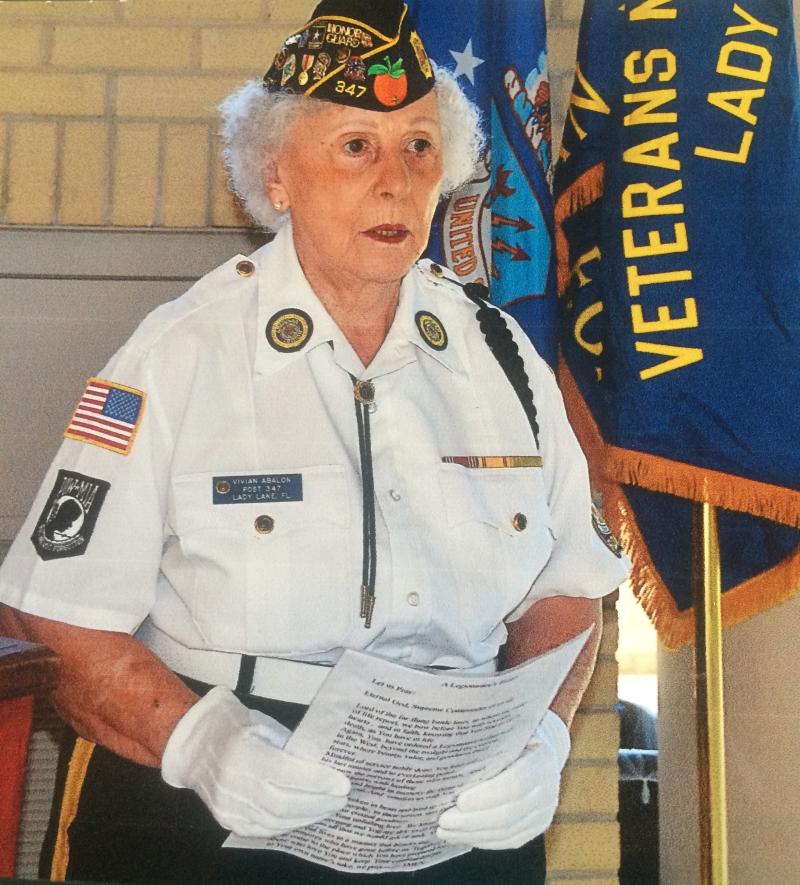 American Legion member Vivian Abalon has been serving her country with honor for 72 years. Born in Bridgeport, Conn., on April 2, 1924, and growing up in the small town of Milford, she was a girl who loved to sing. She wanted and considered nursing as a career, but her father discouraged this career choice for a young teen.

In 1942, Vivian Abalon decided to enter defense work and went to work in an aircraft plant. She felt this to be her way of supporting her country. While involved in this defense work she learned of a contest for the employees to create a slogan or phrase to show American pride in their jobs. The first prize for the best slogan would be war bonds. She submitted her suggestion, “Loyalty and Accuracy help Maintain Democracy.” Abalon won the contest.

At the age of 20, Abalon wanted to join the military to fulfill her duty and obligation as an American - to serve her country. They were very concerned but were proud of her sense of duty to America. Her father was a veteran of World War I and was very proud of his daughter’s decision to serve her country. Since she was very close to her parents and always valued their opinion, she was able to convince them that her decision to enter military service was the right decision for her. They consented to her wishes and Abalon entered the Army Air Corps in 1944.

As a newly inducted WAC, Abalon was assigned to her first duty station, Fort Oglethorpe, located in Catoosa County, Georgia, near the Georgia-Tennessee line. In addition to being an induction and processing center in 1944, it was home to 4,000 German POWs and civil detainees. After completing basic training and typing school, Abalon was stationed at Westover Air Field in Massachusetts. During WWII the Army Air Corps established numerous air fields in Massachusetts for technical training. She worked in aircraft maintenance and then was assigned to the main desk in the hospital answering crash calls on arriving injured and wounded military personnel.

Abalon was reassigned to the Seymour Johnson Army Air Field, in Seymour, N.C., where she performed a variety of jobs for the Army Air Corps. During this one year assignment she met her lifetime best friend, Lillie Maude Collins. It was here that her best friend met her husband who was serving in the Army Air Corps. They married and after the war they had a son, Joseph S. Bonsall. Mr. Bonsall is now an author, songwriter and singer for the Oak Ridge Boys. Also, during this assignment Abalon met her future husband, Roy Hawthorne, a pilot in the Army Air Corps involved in combat missions in World War II and in the Korean War served as an intelligence officer.

Later, Abalon was transferred to the Bolling Air Field in Washington, D.C. She was assigned to the Pentagon for a number of months and continued in this capacity until she was transferred to Mitchel Army Air Field in New York. The Mitchel Army Air Field served as Air Defense Command developing air defenses for cities and industrial areas along the East Coast. During this assignment, she was informed that her next duty station would be in Japan. Her brother, who was also in the military at the time, was concerned for her safety persuaded her not to go to Japan. He advised her to speak with one of the military chaplains. She was immediately reassigned for duty to the Chaplain’s Office. She stated that this was the hardest duty she ever served. There she typed for three chaplains preparing letters and other communications often pulling double duty, as she also worked at the Air Field Post Exchange.

Following the end of World War II in 1945, Abalon was transferred to Fort Dix in New Jersey for processing and discharge from military service. She was honorably discharged on July 20, 1946. Her future husband continued to serve as an intelligence officer in the Korean War. Due to his continuing military service they did not marry until 1951. They had one daughter who now resides in Jacksonville, Fla.

Following her military discharge, Miss Vivian wanted to continue to serve her country and the men and women who were veterans or still serving in the military. In 1953, she joined the first American Legion post in South Florida, which was in Miami, the Harvey C. Post 13. In 1981, she moved to Mount Dora, Florida and transferred her Legion membership. In 1999, Miss Vivian decided that she would try to create in Leesburg, Florida a Women’s Army Air Corp Veterans Association. She was granted a National Charter for Chapter 109, which she named “Lakers Triumph.” She served as its first commander. After a long service as the first commander, she stepped aside to allow another member to serve.

In 2004, Avalon transferred to the Lady Lake, Fla., American Legion Post 347. Post 347 is the largest Legion post in the world. She is still looking for ways to serve veterans, so she joined the Post Honor Guard. She continues to perform many functions with the Post 347 Honor Guard, including the posting of our nation’s colors at events. The Post 347 Honor Guard also provides military honors for deceased military veterans.

Many of these funerals are conducted at the Florida National Cemetery in Bushnell, Fla. In 2005, Abalon began reciting a spiritually and emotionally calming poem at each funeral. This poem has been adopted by Post 347 Honor Guard. She has recited this poem over 200 times helping grieving family members cope with their loss.

In 2010, Abalon, a veteran of World War II, received her well deserved Honor Flight to our nation’s capital. Here she received her official “welcome home” and was invited to view the World War II and Korean War memorials.

Legionnaire Vivian Abalon and her late husband are truly part of the greatest generation that ever lived. At age 90, Abalon has a very sharp memory and mind, in addition to the “can do” spirit of that generation. She still possesses a determined military demeanor and desire to serve God, veterans and country. She continues to believe in the fundamental principles, self truths and true patriotic service to our nation.