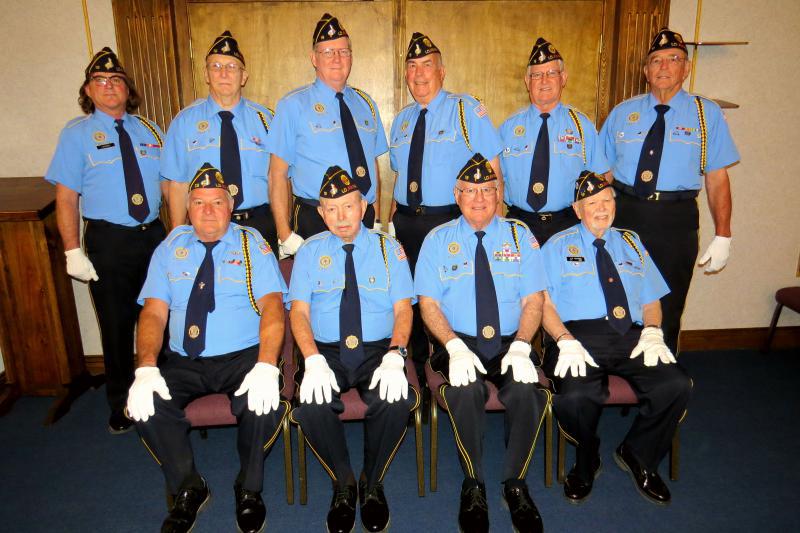 Members of the honor guard from James O. Hall Post 19 of The American Legion, Department of Louisiana, in Jennings, recently conducted their 600th military funeral protocol since the unit commenced operations in August 2004. Pictured and seated from left to right are current guard members Darrell Landry, Jerry Lege, Sam Doucet and John Louviere; standing, left to right, are Tony Landry, Horace Naquin, Glenn McFarlain, Charles Burrell, Bob Doucet and Bill Caraway. Legionnaires who have served with the guard over the last 13 years include Ed Gary, Doug Daigle, John Ryan, Wayne Ledbetter, Johnny Landry, Doug Humbarger, Colin Fake, Charles Sonnier and Wilbert “Tee” Comeaux. The guard members consider it a privilege to pay tribute to their brothers- and sisters-in-arms. The guard is composed of volunteers from Post 19. They receive their military funeral support requests from the veterans’ families through the funeral homes in Jefferson Davis Parish. The military honors are rendered to veterans whose services take place in Jefferson Davis Parish and are provided free of charge. The guard is able to function indoors or outdoors, as the situation requires. Each guard member is assigned specific duties for each service. At the funeral home, or at the church, the guard members offer a prayer and a military salute to the departed veteran. At the cemetery, the unit’s chaplain offers a final prayer and the rifle squad executes three volleys of rifle fire followed by their bugler sounding Taps. The ceremonial flag is then carefully folded into three corners in accordance with military tradition and is presented to the family, along with the spent rifle cartridges from the rifle salute. Guard members make adjustments to the military protocols as the situations dictate. In the past the honor guard has enjoyed tremendous support from the Southwest Louisiana Veterans Home, Walmart, the Zigler Foundation, Jeff Davis Bank, Parker’s Department Store, the Jennings Daily News and the A.J.M. “Bubba” Oustalet Jr. family. Letters and notes from deceased veterans’ families indicate their approval, appreciation, support and continued need for this final honors program for their loved one who served his/her country unselfishly with dignity and respect.